Carter set a career best and earned conference gold on his final jump, landing at 7.65 meters (25-1 ¼) and becoming the first Hawkeye to win a conference title in the indoor long jump since Matty Gorman in 2005. Carter’s career best ranks fifth all-time in program history.

“Anytime you have a champion win on his last attempt, that’s pretty impressive. It was great to see James do that,” said Iowa director of track and field Joey Woody. “This was almost a perfect day.”

Carter led a group of Hawkeyes that totaled 23 team points to dominate the men’s long jump. Jamal Britt finished third with a mark of 7.46 meters. Deandre Stapleton Jr., finished fourth with a career-best 7.41 meters, and Kaleba Jack rounded out the scoring in seventh at 7.20 meters.

In the men’s 600-meter semifinal, three Hawkeyes advanced to Saturday’s finals and five set personal bests. The group was led by Julien Gillum, who won his heat and finished third overall in 1:17.13. Spencer Gudgel won his heat and is seeded fifth with a time of 1:17.38. Tyler Olson finished second in his heat and eighth overall in 1:17.83. The trio of Gillum, Gudgel and Olson shuffled Iowa’s all-time top 10 record board, moving into fifth, seventh and 10th on the all-time list. Josh Andrews and Armando Bryson also recorded career best times.

In the men’s 60-meter hurdles semifinal, the Hawkeyes recorded three career-best performances and advanced four to the finals. Britt won his section in 7.75, and Josh Braverman (7.85), Gratt Reed (7.86) and Peyton Haack (7.91) all advanced to the finals. Reed and Haack’s marks are personal bests.

Austin West and Haack sit second and third, respectively, through four events of the heptathlon. Haack opened the day for Iowa winning the heptathlon 60 meters. West placed runner-up in both the 60 and long jump. Neither student-athlete finished lower than fifth in any of the four events.

“That is the expectation,” said Woody. “We needed to come out from the first gun and those guys set it up well, going 1-2. Having those hurdlers come back right after that and put up big marks leaves me really excited about coming back Day 2. Austin and Peyton are looking good right now.” 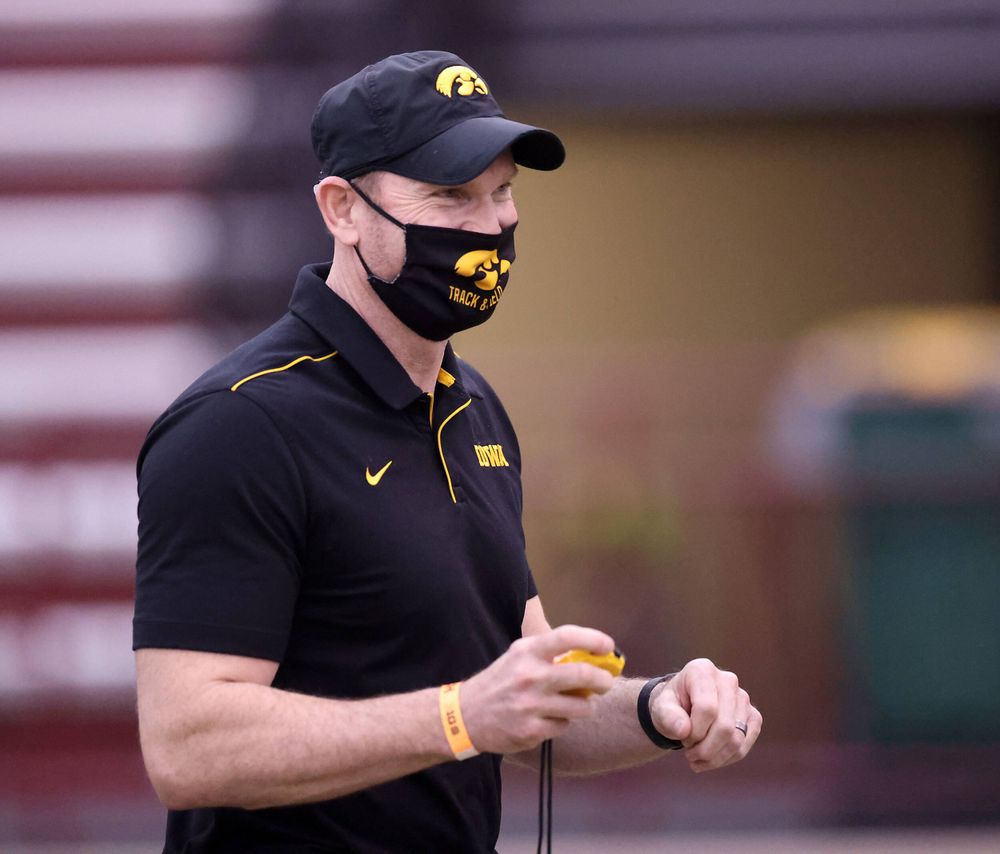 The Hawkeye women are sending two to Saturday’s 60-meter hurdles finals. Paige Magee earned the top seed with a time of 8.30 and Tionna Tobias placed fifth overall in 8.53.

In the field events, Tyler Lienau put points on the board in the weight throw, tossing 20.30 meters to place fourth.

UP NEXT
The men return to the track with the final three events of the heptathlon beginning at 9:30 a.m. (CT). Women’s events begin at 3 p.m. with the triple jump. The championships are streamed online at BTN Plus.