No. 8 Iowa Suffers Road Loss at No. 6 Ohio State

COLUMBUS, Ohio – The eighth-ranked University of Iowa men’s gymnastics team fell at No. 6 Ohio State, 406.100-395.750, inside the Cavelli Center. The Hawkeyes claimed the all-around title as senior Bennet Huang posted a score of 81.100.

Junior Stewart Brown took third in all-around with his career-high of 79.100. Brown claimed the title on floor with a career high of 14.350, and junior Noah Scigliano placed first on the horizontal bar with a 13.200. Junior Evan Davis finished in fourth in all-around, scoring a 78.750.

“I think we had some good individual routines, but overall, we didn’t have consistent rhythm or hit sets across each event,” Huang said. “We need to find a way to start our competition out stronger so that we aren’t competing from behind right at the start. Our team needs to train and improve on going from the start to the end of each event lineup with better consistency and minimal deductions.” 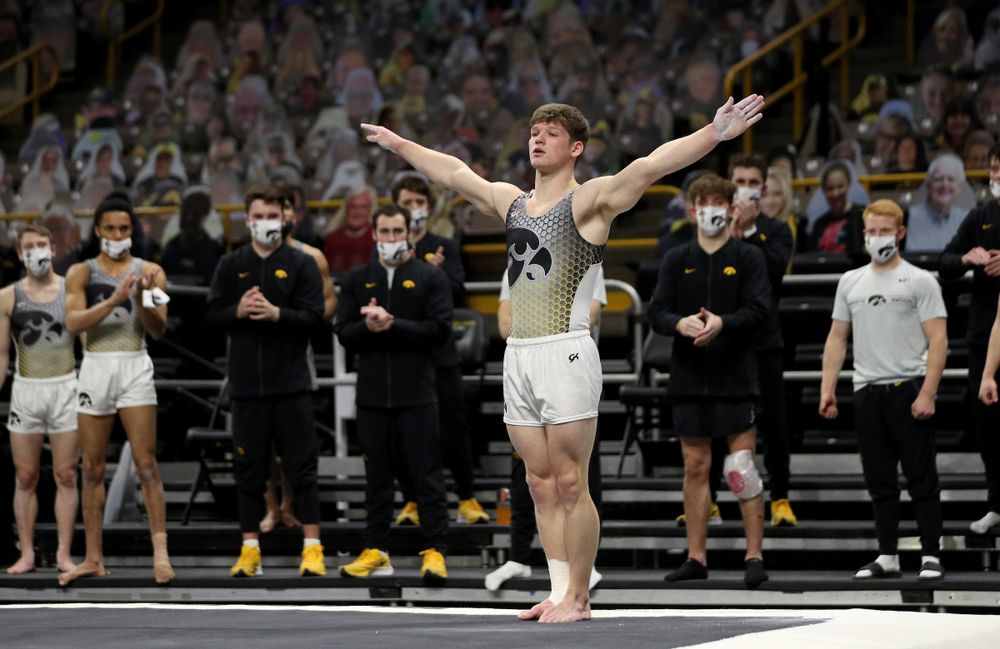 Junior Drew Helberg led the way in the first rotation of the meet with a score of 13.100, placing fifth. Huang scored 12.800 to place seventh and Addison Chung, the senior from Massachusetts, posted a season-high of 12.500 to finish eighth. Lastly, Brown helped his all-around performance with a career-best 12.250. The Hawkeyes finished the rotation with a team total of 61.850.

Tope scored a second-place finish and 13.800 to lead Iowa in its final rotation. Huang finished in a tie for fourth alongside Brown after scoring 13.700. The Hawkeyes posted a new season-high of 66.500 on the parallel bars.

Noah Scigliano, the junior from Des Moines, led the Hawkeyes on the high bar with his tie for first-place with a score of 13.200. Davis finished with a 13.150 to give him sole possession of third, and Brown took fourth with 13.000. Iowa’s total from the horizontal bar was 62.850.

The Hawkeyes will host Nebraska for Senior Day inside Carver-Hawkeye Arena on March 20 at 3 p.m. (CT).  It will be the program’s final home meet in its history and the competition will be televised on BTN.