No. 8 Iowa Downs No. 4 Nebraska in the Final Home Meet

“That meet probably took a couple of years off my life,” Huang said. “It was great to go out like that and we wanted to make a statement”

“I’m a little bit emotional, you could not have written a better Cinderella story ending. We were tied going into the final routine, which never happens; the probability of that is ridiculous. It was a ton of fun, we really did our job tonight, and I am proud of my kids. They killed it.

“Bennet, who I’ve been working with for 15 years, it’s incredibly rewarding to watch him grow up and go through this, and to share all kinds of lasts with him has been pretty awesome.” 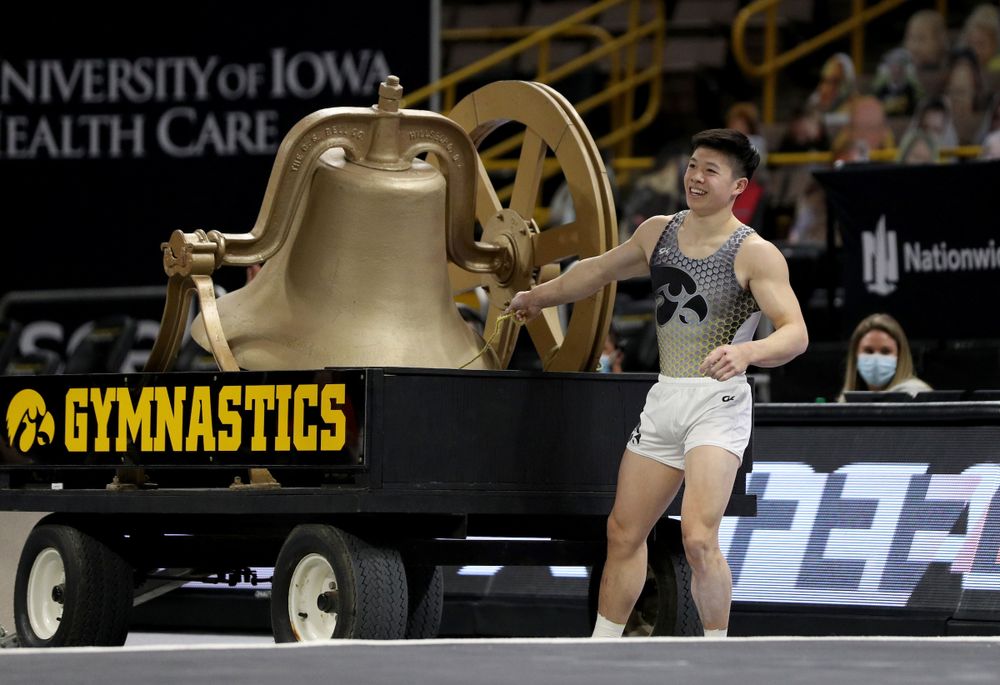 Huang scored a 14.300, earning the senior a tie for the title on floor. Senior Kulani Taylor, and Davis both scored a season high 14.100 to finish in a tie for fourth. The Hawkeyes team total of 69.100 tied the team’s season high on the floor.

Huang led the way with his third-place score of 13.600. Davis finished in fourth after his career high 13.550. Drew Helberg, the junior from Texas, also posted a new career best on pommel with a 13.4000, giving him fifth. Brown set a new career high of 12.400 to add to his all-around total. Iowa’s team total was 65.900 in the second rotation.

The Salem, Oregon, natives, freshman James Friedman and junior Peyton Hobson, lifted the Hawkeyes on the rings. Friedman posted a new career high 13.600 and a second-place finish. Hobson scored a 13.500, which was good for third. Brown added another career high on Saturday, this time on rings with a 13.200 and seventh-place finish. The Hawkeyes finished with season high 67.150 team total on rings.

Brown claimed the title with a 14.900, which is a career high and places him in the Iowa record books. Sophomore Amari Sewell from Maryland also continued his success on vault with a second-place finish and career best score of 14.650. Huang took third with a 14.500, and Iowa’s team total of 72.050 is the team’s new season best.

Sophomore Carter Tope took second with a 13.850. Huang’s career best 13.750 was good for third, and Hobson also added a career best of 13.000 on bars to give him eighth. The Hawkeyes finished the fifth rotation with a total of 66.300.

The Hawkeyes will head to Lincoln, Nebraska, on April 3 to compete in the Big Ten Championship inside Pinnacle Bank Arena at 7 p.m. (CT).