UNIVERSITY PARK, Pa. – The University of Iowa soccer revenge tour continues Thursday in the semifinals of the Big Ten Tournament.

The Hawkeyes will face top-seeded and fifth-ranked Penn State at 4 p.m. (CT) at Jeffrey Field. The game will be televised on BTN.

“We’re going to Penn State and no one thinks we’re winning this game,” said sophomore defender Samantha Cary. “No one has the expectation that Iowa soccer can make it to a Big Ten Championship game after placing 12th in the regular season. We have the belief in ourselves and we have nothing to lose.”

Iowa entered Big Ten Regional Weekend as the No. 7 seed in the West Division after going 2-8-1 during the 11-game regular season. The Hawkeyes avenged a 3-0 loss to Illinois in the opening round behind goals from Josie Durr and Meike Ingles in a 2-1 win.

The team continued the “tour” with a 2-0 shutout victory over third-seeded Minnesota on April 11. The Hawkeyes scored twice in the game’s first 10 minutes – on strikes from Ingles and Samantha Tawharu – to advance to the program’s first Big Ten Tournament semifinal since 2014.

“No one expected anything out of us,” said Cary. “It was almost poetic that we got to go to Illinois’ field to play this game because when we played the first time, it was the most embarrassed we felt leaving a field.

“We knew we didn’t deserve a 3-0 loss. We were excited to get back on the field to play Illinois and Minnesota to show who we are as a team and re-label ourselves.” 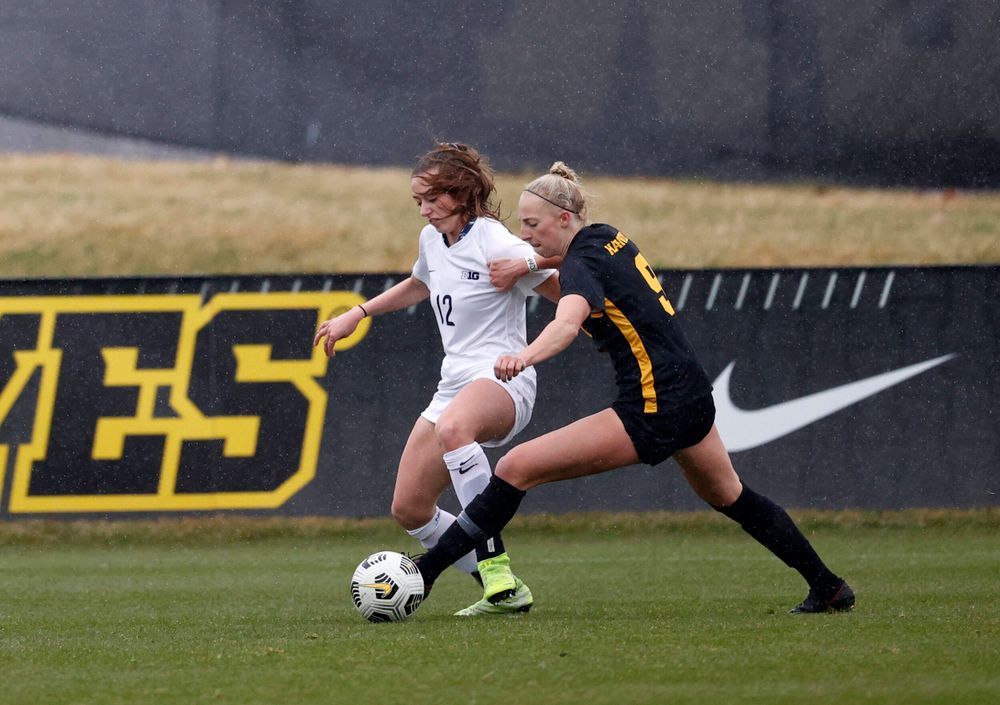 It was a testament to the program’s culture that the team was able to stay together after struggling to open the season. Iowa started the year with six losses and a tie in its first seven games.

“As the season went on, a lot of teams would get discouraged with the season we have had,” said Cary. “Our team chemistry and desire grew as we kept losing. It’s something I didn’t expect.

“The resiliency our team has shown and the desire to grow, improve, and develop has been massive. Comparing our first Illinois game to the second, that was huge to get that revenge and it was great to carry it on to Minnesota.”

Now the Hawkeyes have a different animal to contend with. They will face a Nittany Lion team that went 9-1-1 to claim the Big Ten regular season championship before downing Indiana to advance to the Big Ten Tournament semifinals.

“I don’t know that any of us expected to be continuing our season right now,” said Cary. “The fact that we are is a testament to our growth and the love we have for one another. We’re not playing for ourselves, we’re playing for every other girl out there, every girl on the bench, and everyone who couldn’t travel because of injury.

“Our team desire has grown, and it is the reason we’re still playing.”

Penn State defeated Iowa, 1-0, on March 25 at the Iowa Soccer Complex. The Nittany Lions’ one goal output was their lowest in a game this season.

“Penn State is a great team and it’s going to be a massive challenge,” said Cary. “Defense is going to be crucial because they have some of the top players in the country. We’re excited for the opportunity to play them again and to keep the revenge tour going.

“This is an opportunity to show what we can do.”