MINNEAPOLIS – University of Iowa all-arounders Evan Davis and Bennet Huang earned All-America distinction at the NCAA Championships Finals on Saturday night inside Maturi Pavilion.  It was the final competition for the University of Iowa men’s gymnastics program.

The duo are the 112th and 113th All-Americans in program history.

“Evan Davis and Bennet Huang solidified their legacy tonight as two of the best all-around gymnasts in the NCAA,” said head coach JD Reive. “Their leadership never faltered. I am proud to call this group of young men my final Iowa team. The 2021 Hawkeyes are legendary… all of them and all of those who played their part. Once a Hawkeye, always a Hawkeye.”

“Being an Iowa gymnast is an incredible honor,” Davis said. “When I committed, I saw a change in this program. A switch was flipped, and all of the gymnasts deeply wanted to change the perception of this program. Every year since then we have broke school records, won huge upsets, won regular season titles, placed the highest at B1Gs in 15 years, and put two gymnasts on the podium for all-around All-Americans.

“Being an Iowa gymnast is about defying expectations and raising our own every year. I deeply believe that if we were given a few more years, this team would be of championship potential.”

“It has been a whirlwind of emotions, but I’m grateful for the time that I’ve had at Iowa,” Huang said. “To cap it off with All-America honors alongside Evan was an amazing experience. I’m grateful for everyone who has helped me to this moment of my life, and there are far too many people that I need to thank for my successes.

“I’d especially like to thank coach JD (Reive) and my parents for their unwavering support for me through the ups and downs. Overall, I couldn’t have asked for more. It was gratifying to put my heart and soul on the competition floor one more time. I am so proud of everyone on this 2021 Iowa gymnastics team, and this year has been filled with moments that I will forever cherish for the rest of my life.” 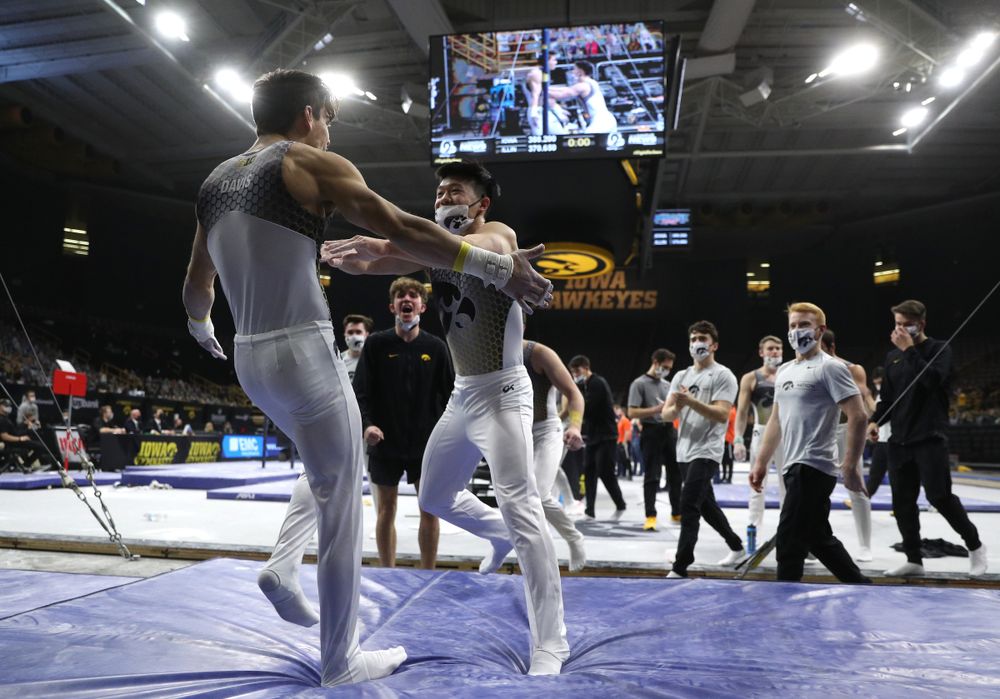 The Hawkeyes also had four additional student-athletes competing in the NCAA Finals. Walk-on freshman James Freidman scored a 13.466 on rings to finish in 27th, and junior Peyton Hobson competed on rings and finished 37th with his 12.700.

Sophomore Amari Sewell took a share of 19th on vault as he opened the meet with a 14.266 and sophomore Carter Tope put up a score of 13.333 on the parallel bars, which was good for a three-way tie for 22nd.