THIS WEEK
The University of Iowa soccer team makes its second consecutive NCAA Tournament appearance, facing Campbell on April 27 at Eakes Athletic Complex in Buies Creek, North Carolina. The game will be played on Campbell’s home field beginning at 2 p.m. (CT) and be streamed live on ESPN3.

WATCH/FOLLOW LIVE
• Tuesday’s game will be streamed live on ESPN3 with Zach Berly on the call.
• Live stats will be available on NCAA.com.
• Fans can follow the Iowa soccer program on Twitter (@HawkeyeSoccer) for live in-game updates.

WHAT YOU NEED TO KNOW
• Head coach Dave DiIanni is in his seventh season at the helm of the soccer program. With a Cinderella Big Ten Tournament run, DiIanni has led the Hawkeyes back-to-back NCAA Tournament appearances for the first time in program history.
• In 2019, Iowa went 15-5-1 to earn an at-large berth into the NCAA Tournament for the second time in program history. This year, the Hawkeyes caught fire late to win the Big Ten Tournament for the first time in school history and earn the league’s automatic bid.
• The Hawkeyes are the lowest seeded team to ever win a Big Ten Tournament. As the No. 12 seed, the Hawkeyes reeled off four straight victories over a two seed (Illinois), three seed (Minnesota), one seed (Penn State) and three seed (Wisconsin). In a “normal” year, Iowa wouldn’t have even qualified for the postseason.
• Iowa’s “Revenge Tour” was complete as the Hawkeyes avenged regular season losses to all four teams.
• After starting winless through their first seven games, the Hawkeyes have gone 6-2 since March 21. Likewise, after not scoring in their first six games, six Iowa players have combined for nine goals since March 18.
• Freshman Meike Ingles found the back of the net for three game-winners in victories over Illinois, Minnesota and Penn State. She also had an assist on junior Jenny Cape’s golden-goal against the Badgers. Ingles was named the Big Ten Tournament Most Outstanding Offensive Player for her dominating performance.
• Goalkeeper Macy Enneking was named the Most Outstanding Defensive Player in the tournament after posting two shutouts and making 14 saves. She was also named to the all-tournament team along with Ingles, Samantha Tawharu, and Hailey Rydberg.
• Despite going scoreless in the regular season, Ingles now leads the team with three goals.
• Juniors Hailey Rydberg and Riley Whitaker were voted team captains for the 2021 spring season.

LAST GAME
The Hawkeyes won their first-ever Big Ten Tournament Championship with a 1-0 win over Wisconsin off a golden-goal from junior Jenny Cape. Iowa’s win over the Badgers was its first since 2012. Freshman goalkeeper Macy Enneking came up with five clutch saves to protect Iowa’s sixth shutout of the season. Cape’s goal in the 63rd minute was just the second of her career (against Iowa State in 2019). The score came off just her fifth shot attempt of the season.

POSTSEASON HISTORY
The Hawkeyes will be making their NCAA Tournament appearance in school history. It will be the third time Iowa will face its opening round opponent on its home turf.
• The Hawkeyes fell at Notre Dame, 4-1, during the 2013 season and lost 1-0 at Kansas last season.
• Five of the current Hawkeyes started the game in Lawrence — Samantha Cary, Sara Wheaton, Josie Durr, Samantha Tawharu and Gianna Gourley. Hailey Rydber, Skylar Alward and Jenny Cape all entered as reserves.

CAROLINA ON THEIR MINDS
With its Big Ten Tournament Championship, Iowa clinched the conference’s automatic bid to the NCAA Tournament. Hosted in Cary, North Carolina, the tournament will consist of six single-elimination rounds, with the first round kicking off on April 27 and the tournament final taking place on May 17.
• The Hawkeyes are set to face Campbell, who earned an automatic bid after defeating No. 24 High Point, 4-3, last Friday to capture the program’s second Big South Championship title since 1993.
• Iowa is making its second consecutive appearance at the event and third in program history.

PENN STATE SUPERLATIVES
• Iowa’s 1-0 win at No. 4 Penn State in the Big Ten Tournament semifinal was the team’s first ever in University Park. The Hawkeyes were 0-12 in Happy Valley heading into the postseason.
• The win is Iowa’s third all-time over the Nittany Lions and the first since 2013.
• Fourth-ranked Penn State is the highest ranked opponent Iowa has defeated in program history. The Hawkeyes beat No. 7 Michigan in the 2013 Big Ten Tournament.
• Iowa held the Nittany Lions’ high-powered offense scoreless for the first time this season. The Hawkeyes limited Penn State to one goal over 180 minutes in two games.

RIDING THE STARTERS
The Hawkeyes utilized just three subs during each of their final two outings at the Big Ten Tournament. Natalie Massa, Gianna Gourley, and Olivia Hellweg are the only subs who checked in for Iowa in their games against Penn State and Wisconsin. Massa and Gourley combined for 28 minutes against the Badgers, while Hellweg and Massa played 41 total minutes against Penn State.
• The Hawkeyes played without starter Samantha Cary in the Big Ten Tournament final after she was issued two yellow cards in the semifinal win over Penn State.

MEIKE “POSTSEASON” INGLES
Freshman forward Meike Ingles attempted 20 shots without scoring a goal during the Hawkeyes’ regular season slate. In the postseason, Ingles has three goals — all game-winners — on 13 shots across four victories.
• Ingles had the golden goal in Iowa’s 2-1 overtime win against the Fighting Illini, she scored 62 seconds into the game in a 2-0 triumph over Minnesota, and she found the net for the third time early in the second half in Happy Valley.
• The Michigan native also notched an assist against Wisconsin and was named the Big Ten Tournament Most Outstanding Offensive Player. 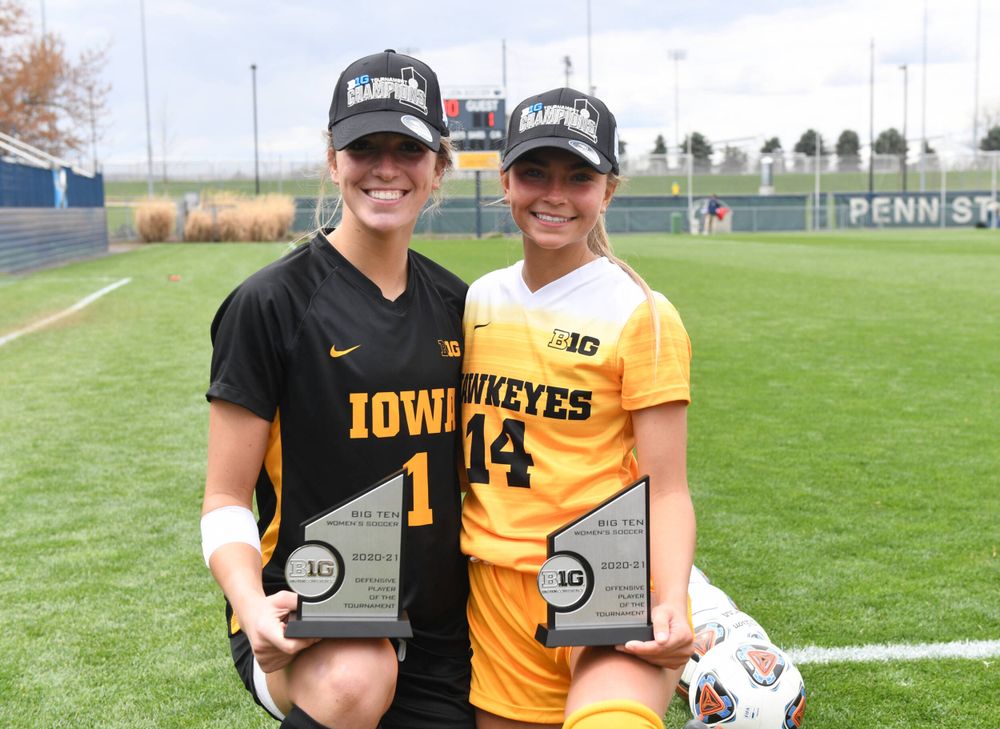 ENNEKING AT GOALKEEPER
Freshman goalkeeper Macy Enneking has tallied 45 saves across eight games this season, including six wins and five shutouts. Enneking leads the Big Ten in save percentage (.938) and goals against average (.395).
• Five of those saves came in Iowa’s win over Wisconsin to lead the Hawkeyes to their first Big Ten title. Enneking previously had a career-high nine saves in Iowa’s 1-0 shutout victory over No. 4 Penn State on April 15 in the semifinals of the Big Ten Tournament. The freshman received Most Outstanding Defensive Player honors for her standout performance at the conference tournament.
• Enneking has given up just three goals in 776 minutes of game time this season, holding opponents to one score or fewer in each of her eight starts. The Hilliard, Ohio, native has made six or more saves in four of her eight starts.
• Enneking was selected as a unanimous Big Ten All-Freshman team selection — the only unanimous honoree. It is the second straight year a Hawkeye was honored and Enneking is the first Iowa goalkeeper to earn the distinction since Emily Moran in 2008. She was also selected as the Big Ten Freshman of the Week on March 22.

GOAL YOU VERY MUCH
After not finding the back of the net in the first six games, six different Hawkeyes have scored over the final nine. Freshman Meike Ingles leads the team with three strikes and junior Samantha Tawharu has scored twice.

FRESHMEN STRONG
Six Hawkeye freshmen have started games this season. Rielee Fetty has started a freshman-high 14 contests, while Meike Ingles and Aleisha Ganief have 12 starts each. Enneking made her first career start at Maryland and has been in goal the past eight contests, while Maggie Johnston (6) Jalyn Mosley (3) also were among the starting 11 before going down with injuries.

GETTING CHANCES
The Hawkeyes have out-shot their opponents in seven of 15 games this season. Junior Hailey Rydberg (36) and freshman Meike Ingles (33) lead the way in shot attempts, taking 45 percent of the team’s shots.

FRESH HAWKEYES
A year after having one of the most veteran teams in the nation with 14 seniors in 2019, the Hawkeyes have one of the youngest. Iowa has only one senior on the 2021 spring roster in Diane Senkowski. Eighteen of the 28 players on the roster are underclassmen.

SCOUTING THE CAMELS
• Campbell enters the NCAA Tournament on a six-game winning streak. The Camels are 8-3-1 and qualified for the event by winning the program’s second-ever Big South Tournament title.
• The Camels have scored an impressive 26 goals in 12 games this season. Campbell has registered 30 assists for a total of 82 points. The Camels are proficient on the defensive side of the ball, as well, shutting out half of their opponents.
• The team avenged its only two conference losses during the Big South Tournament; their other loss came to NC State in the season opener.
• Campbell had seven players earn a spot on the 2020-21 All-Big South teams.
• Junior forward Jessica Donald leads the Camels with five goals and 13 points on the season.
• Freshman midfielder Cazzi Norgren played the most minutes on the team (901 total), starting all 10 games. Norgren has scored once and had two assists this year; Norgren is a native of Cary, North Carolina, which is the host of this year’s NCAA Tournament.

SERIES HISTORY
• Tuesday’s game will be the first meeting between the two schools.
• Iowa has never faced an opponent from the Big South Conference.

LOOKING AHEAD
The winner of Tuesday’s game will advance to the Round of 32 to face third-seeded UCLA on April 30 in Buies Creek.