All For 1 in the Throws Family

IOWA CITY, Iowa — You don’t have to have your nose pressed to the glass to see the family culture that exists inside the University of Iowa track and field throws program. Jordan Johnson could see it as a senior in high school. Serena Brown saw it as an All-American in the SEC.

The men support the women. The women push the men. The men are inspired by what the women have accomplished as individuals. The women want what the men have been able to do as a team.

Collectively, the throws group is family. More specifically, it is a family hungry for championships.

“The biggest thing is that the athletes buy in,” said Eric Werskey, Iowa’s fourth-year throws coach. “The men and women build off one another and it helps create that dynamic and culture that we are a strong group and we’re going to do what we can to push our teammates to be at the top of the podium.”

Johnson was a high school senior when Iowa won the Big Ten outdoor title in 2019. The men’s throwers were shutout of the scoring during Iowa’s title run that year. That wasn’t the case three months ago when the Hawkeyes won the Big Ten indoor title, and with the fourth-best conference mark in discus, Johnson doesn’t expect the group to be shutout in 2021.

“The last time we won the outdoor championship, we didn’t score a single point in throws,” Johnson said. “Now we have guys in every event that can score a lot of points. We want to be main contributors to the team winning another title.” 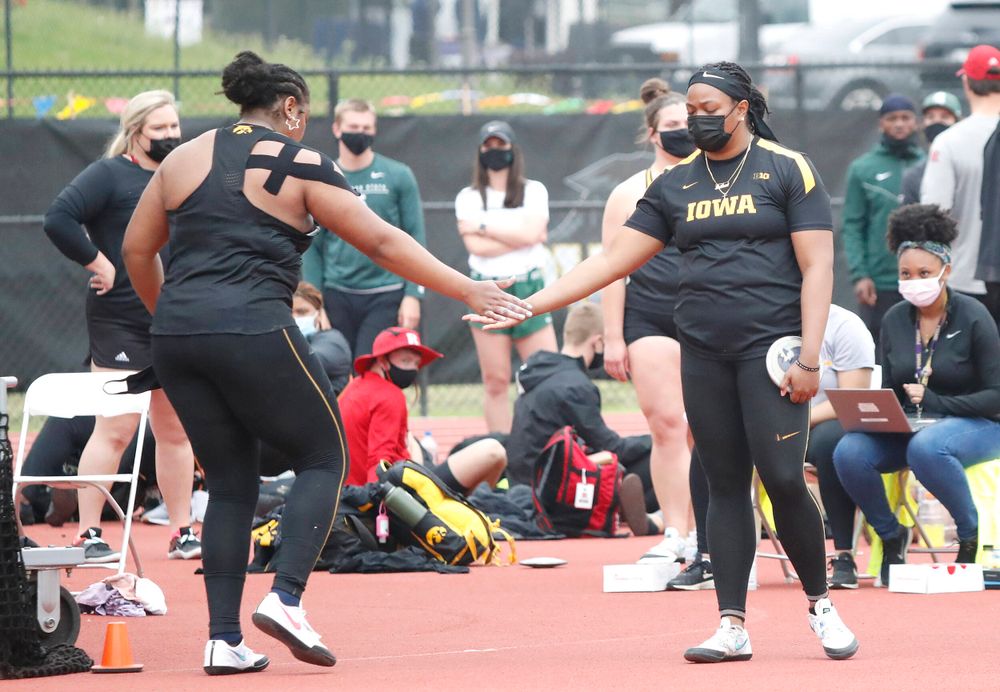 The women are in pursuit of the first conference team title in program history. Iowa has placed in the top three in four of the last five conference meets, which means they’re knocking on the door. Now, with the No. 1 discus, No. 2 shot and No. 8 hammer group in the country, there may be enough holes in the door for the Hawkeyes to walk on through.

“Discus looks good. The women’s shot put is looking good. Oh my gosh, the women’s hammer, the girls are working so hard, I get goosebumps thinking about it,” said Brown. “I’ve only been here a year and the growth that I have seen personally and athletically with the girls, it is just exciting to be part of that and watch them grow.”

To get to the top, the men and women will need to lean on each other.

Johnson said he is inspired by the athleticism and work ethic of Laulauga Tasauga, the defending NCAA discus champion and a five-time Big Ten gold medalist.

“It is clear that there is everyone at the same level, and then there is Lagi. She is on a different level than everyone else in the country,” Johnson said.

Brown says the women look at what the men have been able to do and are “quite frankly a little jealous of the boys” and their team rings.

“It would mean so much if I was able to help Lagi and Nia (Britt) and all of the girls get a Big Ten team (championship) ring,” Brown said. “Lagi has a case full of rings individually, but it means more when you can get it with other people. Anything I can do to help, I will.”

Werskey believes Iowa has the right people leading the charge. Those people seemingly agree. The family culture is what led Johnson to Iowa City. The people inside the family was the attraction for Brown.

“To be a part of a team like this and to be able to help people achieve their goals and dreams and push each other, that’s gold for me,” said Brown.

The Big Ten Championships begin Friday and conclude Sunday in Champaign, Illinois. The three-day event is streamed live and available for free on BTN Plus.