CHAMPAIGN, Ill. —The University of Iowa men’s track and field team captured the 2021 Big Ten Outdoor Championships title with a school record 127.5 points, besting second place Michigan by 33 points. The outdoor conference title is the second straight for the Hawkeyes. Iowa won the championship in Iowa City in 2019. The Hawkeyes won both the indoor and outdoor championship in the same year for the first time since 1963.

“This coaching staff and every one of our athletes competed their butts off and I am extremely proud of our entire team,” said Iowa director of track and field Joey Woody. “This was a complete team win, just like it was during the indoor season. It’s a three-day championship, so we had to solidify our finalist the first two days. We had a really good second day and that got me feeling good going into the final championship day when we need them, and they did a tremendous job every single day.”

The Iowa women finished fourth with a total of 75 points. The Hawkeye men and women combined for 19 Big Ten Medals.

The women were led by Laulauga Tausaga’s historical performance. Tausaga started off the day for the Hawkeyes bringing home gold in the discus throw with a season’s best mark of 62.09 meters. She became the first Hawkeye in program history to win four outdoor Big Ten titles.

“Lagi is the ultimate competitor,” Woody said. “I don’t know too many people that can compete like she does. Every time she steps in the ring, she has a chance to win in the shot put, discus, hammer, weight throw, whatever it is. She is just a tremendous athlete and unbelievable competitor. To be able to come in here and win four-straight years when the target is on your back says a lot about your character. She has big goals. She expects to be a national champ again and repeat there. She expects to make the Olympic team and make the Olympic final and make the podium. She is gunning for a medal and I think she has a really good shot to do that.”

Serena Brown backed up Tausaga in discus, finishing second with a mark of 56.62 meters, and Dallyssa Huggins joined Tausaga in the women’s winners circle, bringing home the gold medal in the high jump with a career best mark of 1.79 meters.

The men grabbed 33 points in the hurdles between three competitors. Jaylan McConico brought home the championship in the 110 hurdles with a career best of 13.23. This time is not only a school record, besting that of Aaron Mallett from 2017, but tied the Big Ten Championship meet record. Jamal Britt took the silver medal with a time of 13.60. Britt later brought home the title in the 400 hurdles with his second career best in as many days, finishing with a time of 49.69. Austin Lietz finished fifth with a career best time of 50.93.

Iowa started grabbing points by the chunk with a run of silver medals, opening the day with a 400-meter relay that placed runner-up in 39.67.

Paige Magee backed up her school-record time in the prelims with a fourth-place finish in the finals of the 110 hurdles in 13.28. Myreanna Bebe took fifth in a career best time of 13.37. Bebe is now ranked third all-time in program history. Jenny Kimbro scored two points for the Hawkeyes, finishing seventh with a time of 13.64. Kimbro completed her busy weekend with a seventh-place finish in the 400 hurdles. Mariel Bruxvoort finished sixth in the 400 hurdles with a career best of 59.11, a time that ranks fifth all-time in program history.

“All I told them today is we just have to go out and focus on ourselves and compete for each other,” said Woody. “Compete and focus on ourselves. If we do that, we are going to be very happy at the end of the day and they definitely did that today. We saw tremendous performances all across the board.”

The Hawkeyes return to the track May 27-29 in College Station, Texas, at the NCAA Western Regional Championships.

“We have the NCAA first round in two weeks down at Texas A&M. In four weeks, we have the NCAA finals and then we have the Olympic Trials, so we have a long season ahead of us,” said Woody. “We are in a good spot going into the NCAA postseason. We just have to keep our heads straight and get our athletes to the start line and feeling good.” 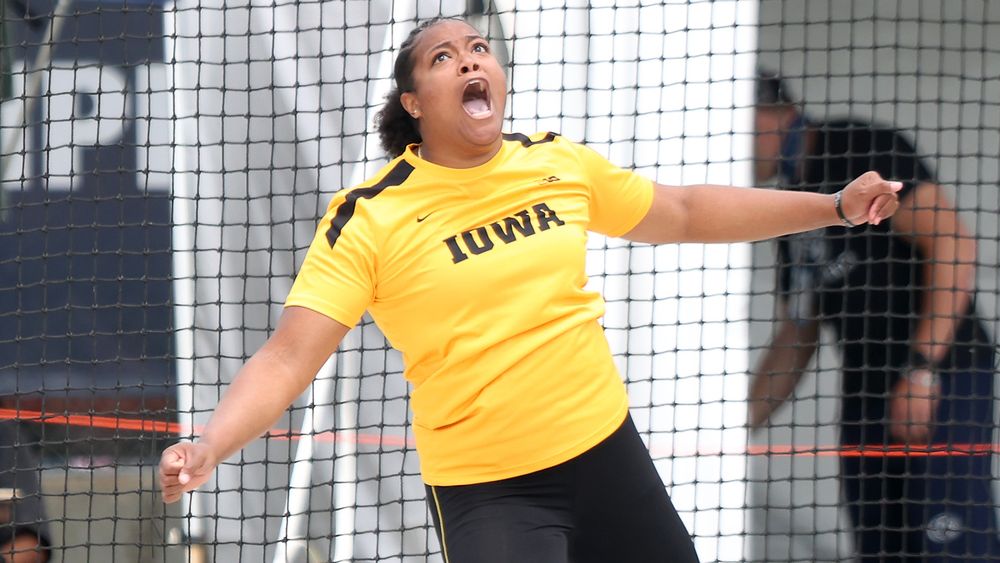