If there is anything that sticks out about the University of Iowa track and field program this season it should be the comprehensiveness of its success. Of the six coaches on staff, all six are represented this week with at least one student-athlete competing at the NCAA Championships.

When Joey Woody took the Hawkeye coaching baton from Larry Wieczorek in 2014, he wanted to continue fielding a complete program.

“That’s the best way to win as a team,” said Woody, who on June 4 was named Midwest Region Coach of the Year.

“It is a credit to our coaching staff because everybody is involved in the whole process of us being successful,” Woody said. “To be able to get athletes to the national meet is the next step of competing to do big things at the national meet.”

But it isn’t easy. For men’s programs, a fully funded NCAA Division I team will have 12.6 scholarships and a women’s team has 18. That means the vast majority of track scholarships are given as partial scholarships. Not only are Iowa’s coaches recruiting well, they are also developing talent.

“Our success speaks more to the development of our athletes, not just recruiting good talent and putting them out on the track,” Woody said. “For us, it is more about getting good athletes and developing them. Being able to spread the wealth across all the event groups is a sign of that.” 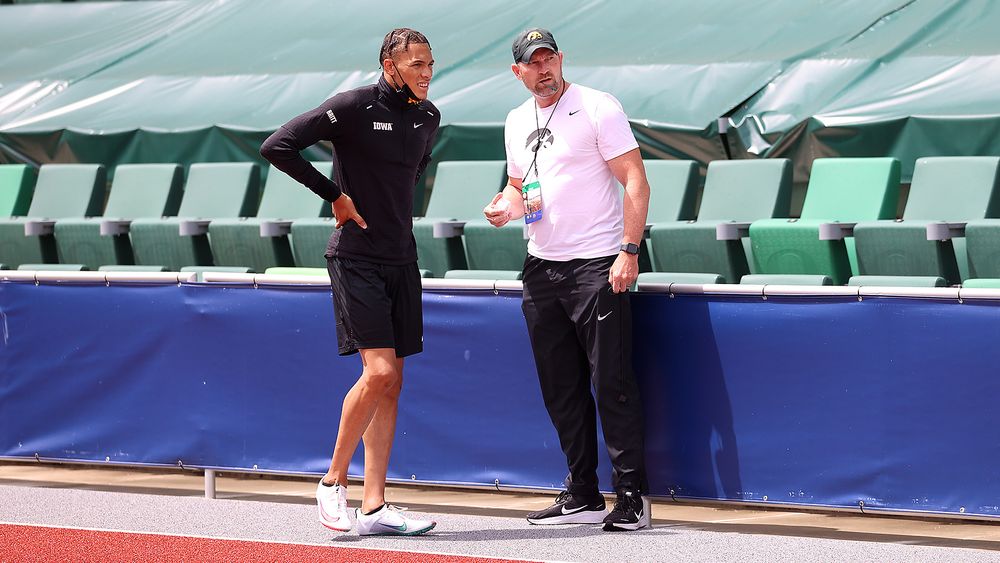 “For us, it is more about getting good athletes and developing them. Being able to spread the wealth across all the event groups is a sign of that.”

Joey Woody, University of Iowa director of track and field

It has added up to a banner year for the Hawkeyes.

“I don’t think we have had this many across all the events,” Woody said. “We have had one year a thrower and jumper, the next year we have a hurdler and a long sprinter and 4×4. This is the first year I think we have had athletes qualify in every event group.”

The Hawkeye men advanced both the 4×100 and 4×400 relays to the NCAA Championships, a goal Woody has for the women in the near future.

“The next step is getting more relays on the women’s side,” he said.

The NCAA Championships run June 9-12 at Hayward Field. The championships are streamed live at Watch ESPN. A complete schedule of events with links to live results is available HERE.