Hawkeyes Are Moving on to NCAA Finals

EUGENE, Ore. — The University of Iowa track and field team is sending Jaylan McConico, Jamal Britt and the 1,600-meter relay to the finals of the 2021 NCAA Track and Field Championships following semifinal action Wednesday at Hayward Field.

“I’m very excited about where Jaylan and Jamal are going into the high hurdle final,” said Iowa director of track and field Joey Woody. “Those guys are tuned up and ready to go.”

The 4×400 relay closed the night with a second-place finish in its heat, earning an automatic spot in Friday’s final at 9:21 p.m. The team of Austin Lietz, Antonio Woodard, Julien Gillum and Wayne Lawrence Jr. finished fourth overall with a season’s best time of 3:04.49.

“We capped things off on a very high note running a season’s best time and the fourth best in the prelims,” said Woody. “That’s the first time we’ve put that group of four together all season and they performed extremely well. That speaks volumes to the depth we have in that event area. We feel great about our chances in the final on Friday.”

The Hawkeyes also have point scoring potential in the decathlon, where Will Daniels sits in fourth place midway through the competition with 4,129 points. Daniels and teammate Austin West kicked off Day 1 of the national championships with a two-three finish in the 100 meters and then doubled down with a two-three finish in the long jump. They sat in second and fourth place after two events before West was forced to withdraw due to an injury.

“I thought Will had a very good first day in the decathlon. He’s competing very well head to head against the field and is set up very well going into Day 2,” said Woody. “Austin started very well but unfortunately had an injury that forced him to withdraw from the competition. He had a tremendous season, scoring a ton of points at our championships and advancing to two NCAA Championships. He will be back and score at this meet next year.” 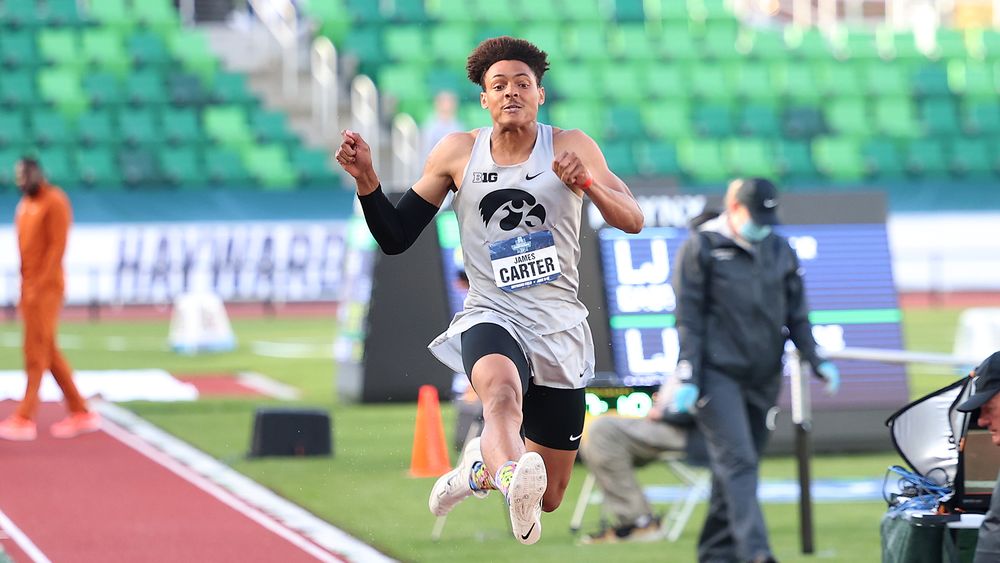 James Carter, Jr. just missed the finals of the long jump, placing 10th with a jump of 7.65 meters to earn second-team All-America honors.

“James competed very well and missed the finals by three centimeters,” said Woody. “He’s had a spectacular indoor and outdoor season and I know he will be back next year to make multiple finals at this meet.”

“We started the meet with the 4×1 relay running a season’s best and beating some very good teams to finish 14th in the country,” said Woody. “That doesn’t score points, but it shows how close we are to making that final.”

“Nate has had an amazing career and unfortunately today was not his day. He and Dan Soto took our distance program to who new heights and we will forever be grateful for what he has done here at Iowa,” said Woody.

“As all big championship meets go there were ups and downs throughout the day, but thankfully for everything that didn’t go great, we had something that went very well to match it.”

UP NEXT
Iowa returns to the track Thursday for Day 2 of the NCAA Outdoor National Championships. Will Daniels will complete the decathlon and open the day at 11:30 a.m. with the 110-meter hurdles. Laulauga Tausaga and Kat Moody will compete in the shot put at 7:40 p.m. A complete schedule of events and links to live streaming and results can be found at hawkeyesports.com/tracklive.