IOWA CITY, Iowa – The University of Iowa Athletics Department announced Wednesday the naming of Duke Slater Field at Kinnick Stadium. The naming was approved by the Board of Regents, State of Iowa.

Slater, a 6-foot-2, 210-pound tackle for the Hawkeyes from 1918-21, was the first Black student-athlete in school history to earn All-America honors. A three-time first-team All-Big Ten selection, Slater competed in football and track and field for the Hawkeyes. Iowa had a 7-0 Big Ten record in 1921 to claim the conference title and was named by more than one media outlet as national champion.

“We are proud and honored to name the Kinnick Stadium playing field as Duke Slater Field,” said Gary Barta, Henry B. and Patricia B. Tippie Director of Athletics Chair. “Much has been written about Duke’s incredible history and the boundaries he broke. With the addition of the relief statue as part of the north endzone project and his recent induction into the Pro Football Hall of Fame, this was a proper capstone to honor a remarkable Hawkeye. As the description on the relief statue states ‘His life in football and beyond was defined by triumph and relentless breaking of boundaries.’”

“We are proud and honored to name the Kinnick Stadium playing field as Duke Slater Field."

Gary Barta, Henry B. and Patricia B. Tippie Director of Athletics Chair.

Slater joined the Iowa football program after a successful prep career at Clinton (Iowa) High School. He helped Iowa to an undefeated record in 1921, including a 10-7 victory over Knute Rockne’s Notre Dame team, which ended a 20-game Irish winning streak. In four seasons, Slater helped Iowa post a 23-6-1 record.

Slater turned pro in 1922, joining the Milwaukee Badgers. After two games, he signed with the Rock Island Independents, where he played from 1922-25. Slater completed his career with the Chicago Cardinals (1926-31).

Slater starred as a two-way tackle in the NFL for 10 seasons and was the longest tenured Black player during that era. Slater played the full 60 minutes during the historic Thanksgiving Day game in 1929 when Ernie Nevers scored a single-game record 40 points, an NFL record that still stands.

Slater graduated from law school at Iowa in 1928 and passed the bar that same year while still playing in the NFL. He started a practice in Chicago and became an assistant district attorney and assistant Illinois commerce commissioner. Slater was elected Chicago’s second Black judge in 1948, and in 1960 became the first Black judge to serve on the Superior Court of Chicago. He moved to the Circuit Court of Cook County in 1964.

Slater Residence Hall, a dormitory located on the west side of the UI campus, is named after Slater. A relief of Slater throwing a key block in Iowa’s 1921 win over Notre Dame is featured outside the north end zone of Kinnick Stadium.

Permanent recognition of Duke Slater Field will be installed on the playing surface later this summer and recognition of Slater and former Hawkeye Alex Karras, also a member of the 2020 Centennial Class of the Pro Football Hall of Fame, is planned during Iowa’s game against Penn State on Saturday, Oct 9. 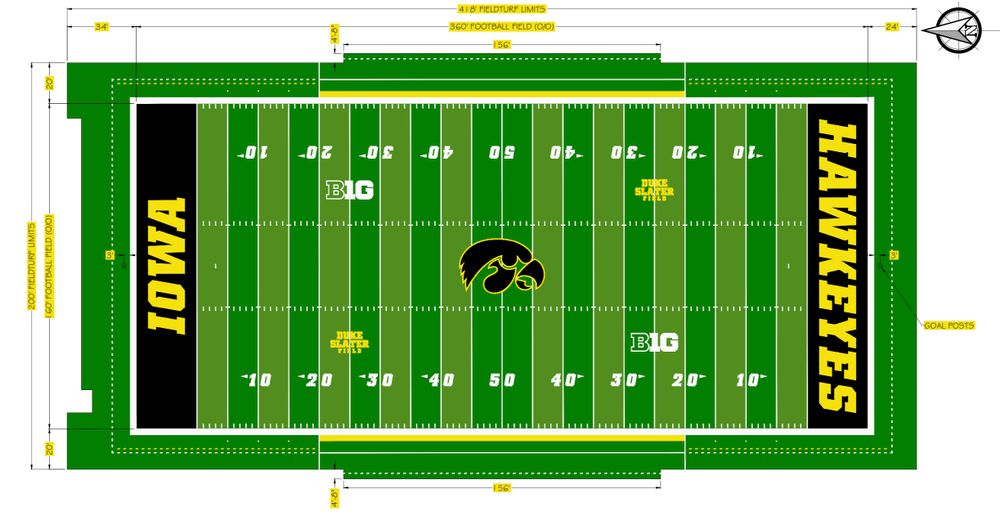