THIS WEEK
The Hawkeyes return for a two-game homestand this week. Iowa plays Maryalnd at 7 p.m. (CT) on Thursday in Iowa City. The  Hawkeyes then host Michigan State at 1 p.m. on Sunday at the Iowa Soccer Complex.

SERIES HISTORY – MARYLAND
Iowa is an even 4-4-0 all-time against Maryland. The Hawkeyes defeated the Terps 1-0 last season in College Park.

SERIES HISTORY – MICHIGAN STATE
The Hawkeyes are 8-11-5 against the Spartans, winning the most recent meeting between the two schools 3-0 in 2019.

SHARING THE WEALTH
Nine different Hawkeyes have combined for 17 goals this season. Fifth-year senior Alyssa Walker leads the way offensively with five goals and 10 points. Forward Kenzie Roling has also put up four goals for eight points of her own, while forward Courtney Powell as has scored twice. Defenders Samantha Cary, Sarah Wheaton, Natalie Massa, and Riley Burns, as well as forwards Maggie Johnston and Samantha Tawharu have each scored one goal apiece. Senior captain Hailey Rydberg has put up a team-best six assists, with freshman Addie Bundy posting the next-highest with five assists. Iowa has outshot opponents 189-90 this season.

DEFENSE WINS CHAMPIONSHIPS
The Hawkeye defense shutout opponents in six of its final 10 games last year, allowing more than one goal only a single time in that span. That success has carried over into the 2021 season, with Iowa posting four early shutouts and keeping all opponents below two scores through 11 games this fall. Redshirt junior Monica Wilhelm has started every game in goal this season, notching 29 saves while allowing just nine goals through 11 games. Wilhelm tallied a season-best seven saves against Northwestern on Sept. 19. 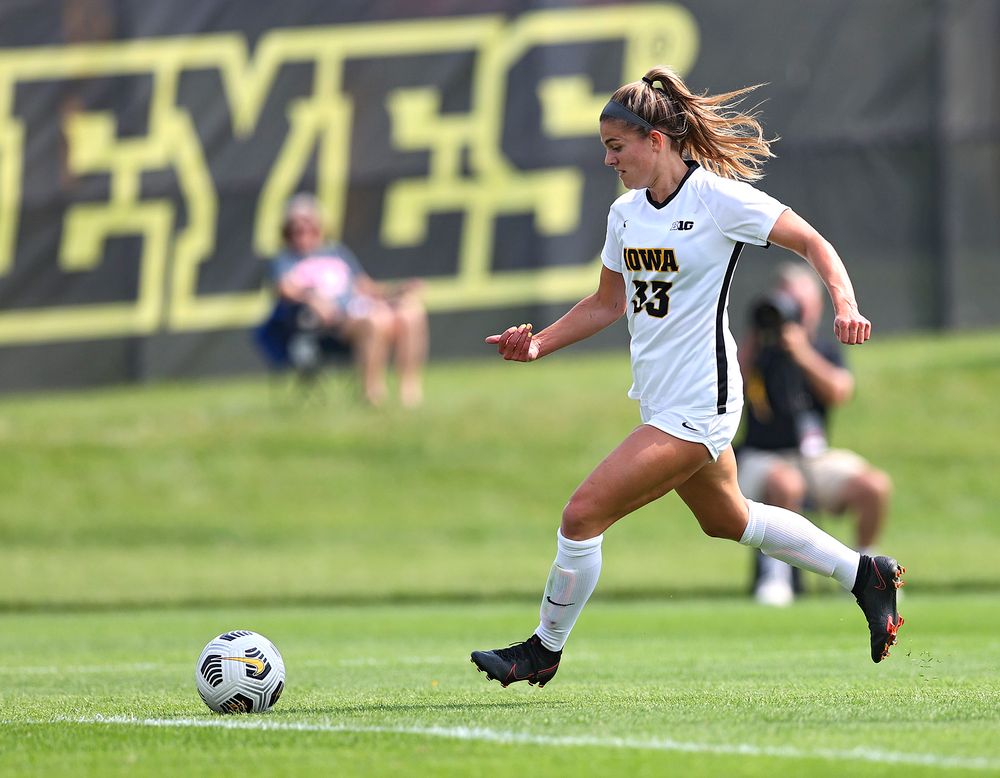 LAST WEEK
The Hawkeyes suffered two close losses in last week’s road trip to Indiana. First, Iowa fell 2-0 on the road against the Hoosiers last Thursday at Bill Armstrong Stadium. On Sunday, foward Alyssa Walker blasted in a go-ahead goal with three minutes to play at Purdue. The Boilermakers answered, though, with a score of their own in the final 60 seconds of regulation to force overtime. Purdue would go on to win with a score in the first overtime period.

Roling, a freshman from Waverly, Iowa, scored goals in each of Iowa’s wins at DePaul and St. Louis. Her first-half goal against the Blue Demons evened the score 1-1 and her first-half goal against the Billikens proved to be the game-winner in a 1-0 Hawkeye win. Including Iowa’s preseason exhibitions, Roling scored in each of the Hawkeyes’  first four competitions this season. Following her week one performance, she was named an honorable mention on TopDrawerSoccer’s Team of the Week.

Roling is the first Iowa freshman to score in consecutive matches since Oct. 3-5, 2008, when Alyssa Cosnek scored in wins over Indiana and North Dakota State (Cosnek also scored in each of Iowa’s first two matches that season, the last Hawkeye rookie to score in the team’s opening two contests).