The excitement continued for the Hawkeyes as sophomore Caitlin Clark recorded her second season and third career triple-double with 24 points, 12 assists and 10 rebounds.

Senior Monika Czinano scored the first basket for Iowa, recording six of her 19 points in the first quarter. After a rebound from Kate Martin and a finish from Czinano, Iowa took a 16-10 lead, after trailing by one, commanding the lead and recording the largest margin of victory over the Spartans since the 1993 season.

Junior Gabbie Marshall led the team in the second quarter with six points, shooting 100 percent beyond the arc. Iowa scored six points off five forced turnovers to clutch a two-point lead at the end of the quarter.

The Hawkeyes came out of halftime with momentum as McKenna Warnock recorded two of Iowa’s seven fast breaks, scoring 11 of her 21 points in the third quarter. The junior went 4-for-4 from the field, 1-for-1 from the three-point range and 2-for-2 from the free-throw line, shooting 100 percent.

“I’m so happy with our third quarter we came out of the locker room with a two-point lead, and we won that quarter 33-11,” said Coach Bluder. “I said to the team, Iowa basketball is back. We didn’t play up to our capabilities at Duke and certainly to come back and play that well, and especially in the second half today, was really gratifying and gives us more confidence going into a tough place to play at Iowa State. Our defense was really good, especially our three-point defense, which we felt like we really needed to have against Michigan State because they’re so capable.”

Iowa kept its momentum in the fourth, starting the quarter with a 12-point run to increase their lead by 36 – Iowa’s largest lead of the game. The Hawkeyes tallied four of their 10 steals in the fourth quarter and scored seven points off fast breaks.

COACH BLUDER ON HER 800TH WIN…

“It’s special being on your home court, obviously, but being able to share that with your family and the women on this team is just so much fun. I enjoy them so much and I’m very thankful that I get to be around them every day.” 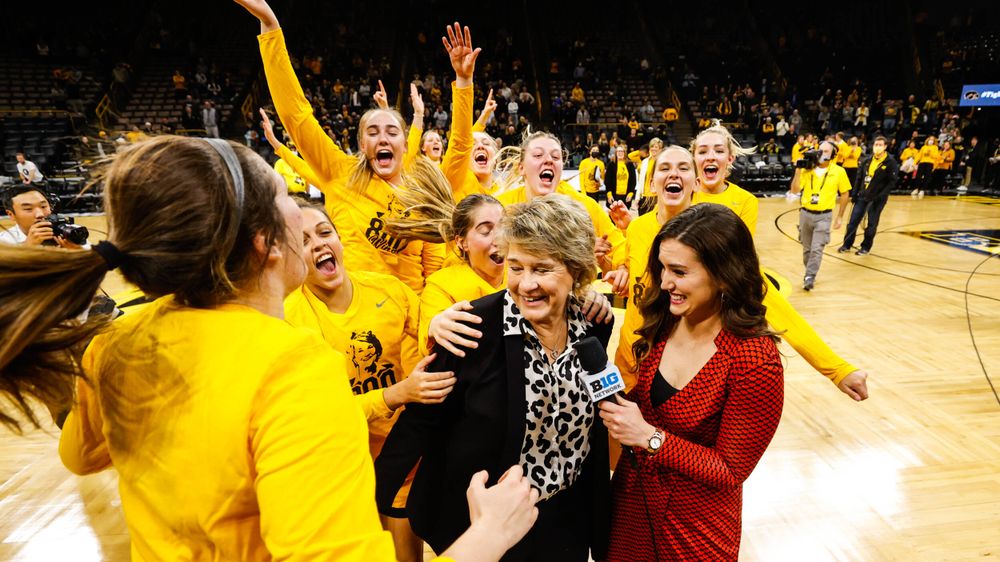 The Hawkeyes travel to Ames, Iowa, on Wednesday, Dec. 8 as they go head-to-head against No. 14 Iowa State in the Iowa Corn Cy-Hawk Series. Tip-off is set for 6 p.m. and will air on ESPNU.