EAST LANSING, MICH. – The 16th-ranked University of Iowa women’s gymnastics team set a season-high score in its 196.475-196.350 victory over No. 15 Michigan State on Saturday night in its Big Ten opener at the Jenison Field House. 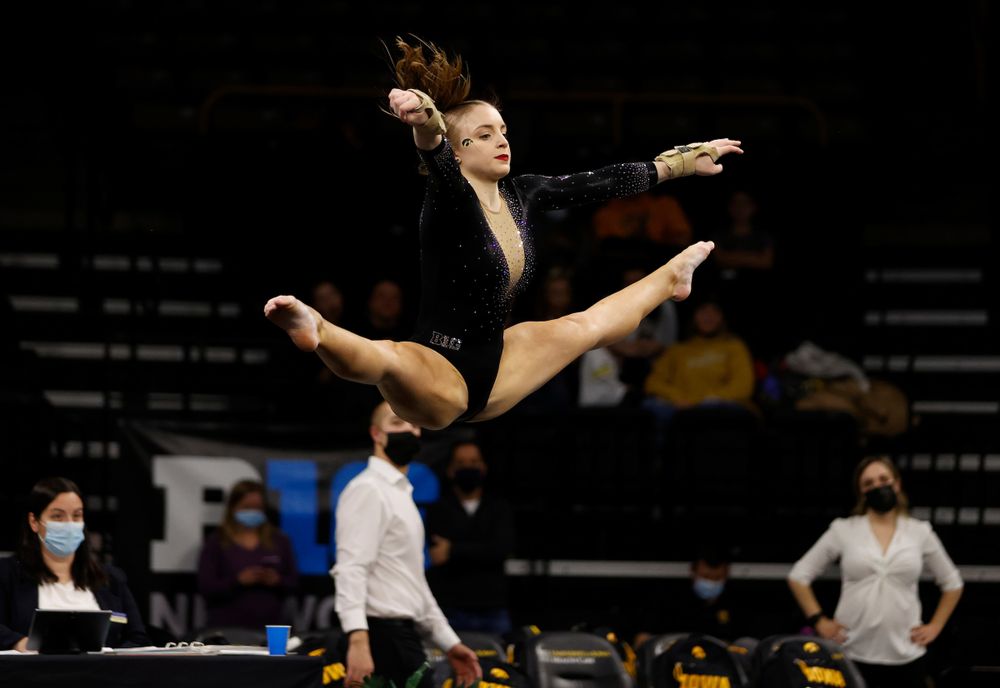 VAULT
The Hawkeyes posted a 49.025 on vault with two gymnasts finishing in the top three. Henderson scored a 9.850 to finish as the event runner-up. Guerin tied her season-high with a 9.825 to take third place and junior Linda Zivat tied for fourth with a 9.800. Sophomore Kendall Laplante set a career-high with a 9.775 to tie for seventh place with teammate Bridget Killian. Senior Alex Greenwald made her vault debut, posting a 9.675.

FLOOR
The Gymhawks tied their season-high of 49.350 on floor with two gymnasts occupying the top two spots and four either tying or setting season/career-highs. Guerin set a season-high and took the event title after posting a 9.950, which ties her for fourth-best score in school history. Henderson scored a 9.900 to tie for second. Zivat tied her career-high, posting a 9.875 for the third time to tie for fifth place. Killian scored a 9.825, and Rojas scored a 9.800 in her floor debut. Senior Allie Gilchrist made her floor debut, posting a 9.700.

BEAM
Iowa scored an overall 49.200 on beam and had three gymnasts place in the top three. Rojas set a career-high, 9.925, to not only take the event title but also tie for eighth place in school history. Killian set a career high and tied with Kaji for third place with a score of 9.875. Vance set a season-high 9.825 to take fifth place, while sophomore Aubrey Nick scored a 9.700 and Gilchrist scored a 9.075.

UP NEXT
The Hawkeyes return to Carver-Hawkeye Arena on Jan. 29 to host Nebraska. The meet is set to begin at 5 p.m. (CT) and it will be 90’s night. Tickets are available online at hawkeyesports.com