No. 22 Iowa Set for NCAA Regionals in Raleigh

THIS WEEK
The 22nd-ranked University of Iowa women’s gymnastics team will travel to Raleigh, North Carolina, to compete in the NCAA Raleigh Regional on Thursday. The meet is set to start at noon (CT) at Valvano Arena at Reynolds Coliseum. The Hawkeyes will compete in Session 2 against No. 6 LSU, No. 11 Missouri, and host NC State.
• The third session will feature No. 3 Michigan, No. 14 UCLA and Maryland along with the winner of the Towson-North Carolina dual.
• The top two teams of each session will advance to the Regional Final on Saturday. The top all-around competitors and top event specialist on each event, who are not advancing team, from each regional will receive an automatic bid to the NCAA Championships from April 14-16 in Fort Worth, Texas.

FOLLOW LIVE
• Thursday’s meet will be televised on ESPN+ – a paid subscription service — with John Roethlisberger and Alicia Quinn on the call.
• Fans can follow along via live results at hawkeyesports.com or via Twitter (@IowaGymnastics).

WHAT YOU NEED TO KNOW
• The Hawkeyes are ranked 22nd in the Road to Nationals rankings with a national qualifying score (NQS) of 196.585. Iowa was ninth following Week 1 — the second-highest ranking in program history.
• Iowa is 11th nationally on floor, 21st on vault, 27th on beam and 44 on bars heading into the NCAA Regionals.
• Senior Lauren Guerin and junior JerQuavia Henderson were named WCGA second-team All-Americans on floor. It is the second straight year the program has had multiple All-America honorees. They are the 11th and 12th All-Americans in program history.
• The Hawkeyes matched a school record with five gymnasts earning All-Big Ten recognition. JerQuavia Henderson was a first-team honoree, becoming the first GymHawk since 2017 to earn first-team recognition in consecutive seasons.
• Clair Kaji, Adeline Kenlin, Lauren Guerin and Bridget Killian all earned second-team honors. Kaji and Guerin are the second and third Hawkeyes all-time to earn four career All-Big Ten honors.
• The Hawkeyes capped a 196.950 – the third-best score in program history – to win Session 1 and take third overall at the Big Ten Championship on March 19.
• Iowa has posted three of the top six scores in school history in 2022 (196.960 at Big Tens, 196.825 at Iowa State, vs. Nebraska).
• Senior Lauren Guerin scored a 9.950 for the third time this season to share the Big Ten title on floor for a second consecutive season. It was her seventh floor title this season. Guerin is tied for ninth nationally on floor with a NQS of 9.950.
• The Hawkeyes earned three Big Ten weekly honors this season — junior JerQuavia Henderson was the Specialist of the Week on Jan. 10, Marissa Rojas garnered Freshman of the Week honors on Jan. 25 and Lauren Guerin was the Specialist of the Week on March 8.
• Head coach Larissa Libby signed a contract extention through June 2026.
• Iowa returned 15 letterwinners in 2022, including three All-Americans and four All-Big Ten selections. Iowa boasts a roster with seven seniors and 11 upperclassmen.

NOTABLES
• The Hawkeyes continue their postseason in Raleigh after posting a 196.950 at the Big Ten Championships on March 19 to win Session 1 and place third overall.
• Iowa posted its second highest floor score of the season and the program’s fourth-best score all-time with a 49.525 at the Big Ten Championships. Four gymnasts scored a 9.900 or higher with senior Lauren Guerin tying for first place after scoring a 9.950 for the third time this season.
• Four gymnasts scored above a 9.800 on beam in Columbus on March 19. Sophomore Adeline Kenlin scored a 9.900 for the third straight week to place fourth and score Iowa’s 50th 9.900 this season.
• All six gymnasts scored a 9.800 or higher on vault, with senior Bridget Killian posting a 9.875 to lead the team and tie for 10th overall.
• The Hawkeyes went 6-for-6 on bars, posting a 49.075. Junior Allyson Steffensmeier performed a 9.900 routine to tie for fifth place.
• The GymHawks scored 49.00 or higher in all four events (floor, vault, bars, and beam) for the first time all season in Columbus.
• Iowa has had nine gymnasts win event titles this season — Alex Greenwald (1), JerQuavia Henderson (12), Clair Kaji (1), Adeline Kenlin (4), Allyson Steffensmeier (2), Lauren Guerin (7), Linda Zivat (3), Marissa Rojas (1), and Bridget Killian (2).

2021 NCAA REGIONALS
• The Hawkeyes finished third at the Tuscaloosa Regional in 2021, finishing with a 197.050 — the second-highest score in program history. JerQuavia Henderson tied for the session’s individual floor title with a 9.925. 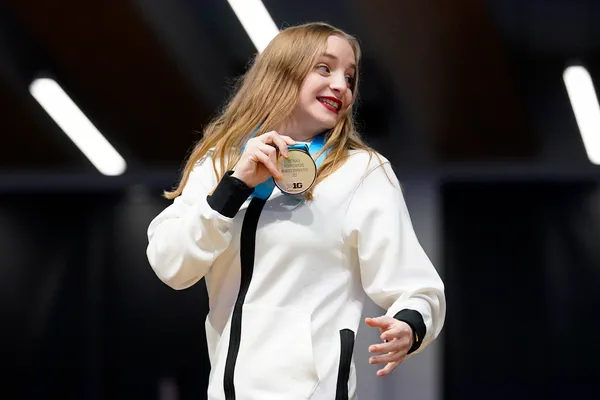 GUERIN, HENDERSON EARN WCGA ALL-AMERICAN HONORS
Senior Lauren Guerin and junior JerQuavia Henderson were named Women’s Collegiate Gymnastics Association second-team All-Americans on floor on March 24. It is the second straight year the Hawkeyes have had multiple honorees. They are the 11th and 12th All-Americans in program history.
• Guerin becomes the second Hawkeye to earn three All-America distinctions, joining Alexis Maday (2002-04). The Austin, Texas native was a second-team honoree in 2020 and a first-team selection last season.
• Henderson is the third Hawkeye to earn multiple All-America distinctions. She was a second-team selection last season.

GUERIN SHARES SECOND-CONSECUTIVE B1G FLOOR TITLE
Senior Lauren Guerin became the second Hawkeye to earn back-to-back Big Ten titles, joining Alex Maday, as she posted a 9.950 to share the floor title. The Austin, Texas, native is the 18th Big Ten champion and eighth floor champion in school history. She was also named to the Big Ten All-Championships Team.
• Guerin has earned seven first place titles and has placed in the top three 11 times this season.
• Guerin has scored 9.900 or higher in 10 of 11 meets this season, and has finished first or second on floor 11 times this season.
• The senior received one perfect 10.0 en route to 9.975 scores on floor at Iowa State on March 4 and against Penn State on Feb. 4 to tie the school record and tie for the event title.

FLOOR QUEENS
Senior Lauren Guerin and junior JerQuavia Henderson have been consistently consistent on floor this season. Guerin is tied ninth nationally with a NQS of 9.950 and has earned seven first place titles and has placed in the top three 11 times this season.
• Henderson is tied for 12th nationally with a NQS of 9.945 with five first place titles and nine top-three finishes this season. The Peoria, Illinois native has scored 9.900 or higher in 11 competitions.
• The pair both received one perfect 10.0 en route to 9.975 scores on floor at Iowa State on March 4 and against Penn State on Feb. 4 to tie the school record and tie for the event title.
• As a team, Iowa has scored 49.225 or higher in all 12 meets this season. Iowa has won or placed in the top three in every meet this season.
• Iowa set a school record on floor with a 49.650 in the comeback win over Penn State.

B1G WEEKLY HONORS
• Senior Lauren Guerin was named Big Ten Specialist of the Week on March 8 after tying for the floor title and finishing runner-up on vault in the Hawkeyes’ Iowa Corn Cy-Hawk Series victory at No. 26 Iowa State on March 4. The honor is the first of the season and her fourth career.
• Junior JerQuavia Henderson was named Big Ten Specialist of the Week on Jan. 10 after scoring a 9.925 on vault and floor in the Hawkeyes’ win over Eastern Michigan. It was her first career honor.
• Freshman Marissa Rojas earned Big Ten Freshman of the Week honors on Jan. 25 after winning her first career event title in the road win at Michigan State. The Michigan native posted an anchor score of 9.925 to take the title and she also made her floor debut, scoring a 9.800.

21 & COUNTING
Head coach Larissa Libby has led the GymHawks to 21 straight NCAA Regional appearances (either as a team or individually). The 2022 season is Libby’s 18th as Iowa’s head coach and 21st overall with the program. She is a three-time Big Ten Coach of the Year.