FINAL RANKING
The Hawkeyes finished the 2022 season ranked 15th nationally, the highest final ranking since 2004. Iowa was ranked ninth following Week 1, which was the second-highest ranking in program history.
• Iowa advanced to the NCAA Regional Final for the first time in the current format, which debuted in 2019.
• The Hawkeyes posted five of the top eight scores in program history during the season.

NCAA REGIONAL FUN
The Hawkeyes overcame a .100 deficit on the final rotation to advance to the NCAA Regional Final for the first time under the current format. Iowa defeated No. 6 LSU and NC State to advance, joining Missouri out of the first session.
• Iowa posted a 196.900 to tie the fourth-best score in program history in the NCAA Regional competition.
• The GymHawks scored a 197.075 at the NCAA Regional Final, the program’s second-highest score all-time (trailing only the 197.150 set in 2004). The 197 was just the third all-time in program history. 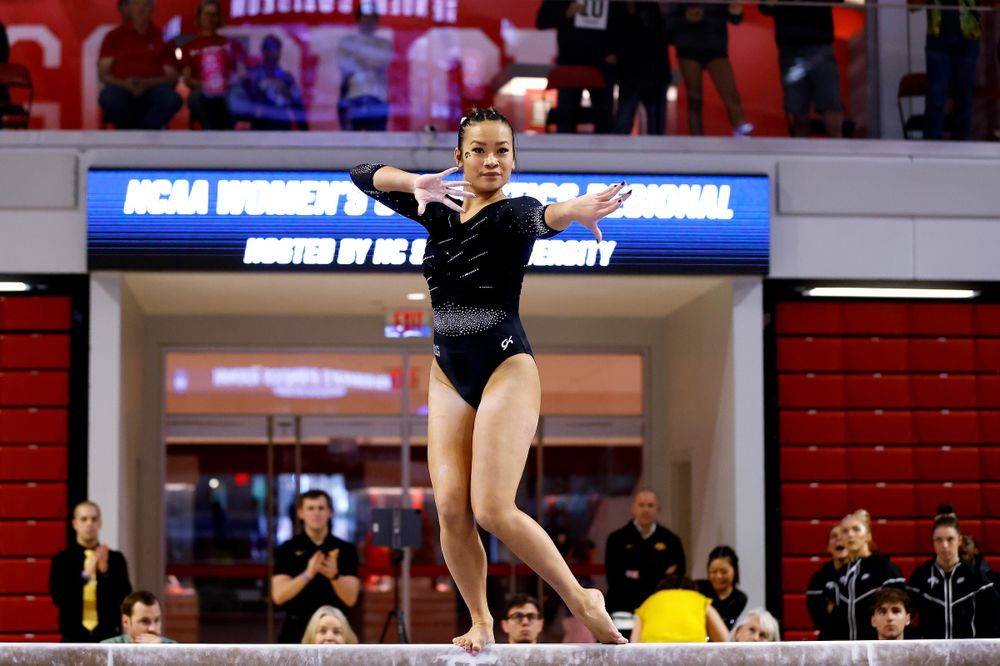 GUERIN, HENDERSON EARN WCGA ALL-AMERICAN HONORS
Senior Lauren Guerin and junior JerQuavia Henderson were named Women’s Collegiate Gymnastics Association second-team All-Americans on floor on March 24. It was the second straight year the Hawkeyes have had multiple honorees. They are the 11th and 12th All-Americans in program history.
• Guerin became the second Hawkeye to earn three All-America distinctions, joining Alexis Maday (2002-04). The Austin, Texas native was a second-team honoree in 2020 and a first-team selection last season.
• Henderson is the third Hawkeye to earn multiple All-America distinctions. She was a second-team selection last season.

GUERIN SHARES SECOND-CONSECUTIVE B1G FLOOR TITLE
Senior Lauren Guerin became the second Hawkeye to earn back-to-back Big Ten titles, joining Alex Maday, as she posted a 9.950 to share the floor title. The Austin, Texas, native is the 18th Big Ten champion and eighth floor champion in school history. She was also named to the Big Ten All-Championships Team.
• Guerin earned eight first place titles on floor and placed in the top three 12 times this season.
• Guerin scored 9.900 or higher in 13 of 14 meets this season, and finished first or second on floor 12 times this season.
• The senior received one perfect 10.0 en route to 9.975 scores on floor at Iowa State on March 4 and against Penn State on Feb. 4 to tie the school record and tie for the event title.
• Guerin shared the floor title at the NCAA Regional Final in Raleigh, finishing with a 9.950 in her final competition as a Hawkeye.

FLOOR QUEENS
Senior Lauren Guerin and junior JerQuavia Henderson were consistently consistent on floor this season. Guerin tied ninth nationally with a NQS of 9.950 and earned eight first place titles and placed in the top three 12 times during the season.
• Henderson tied for 12th nationally with a NQS of 9.945 with five first place titles and nine top-three finishes this season. The Peoria, Illinois native scored 9.900 or higher in 12 competitions.
• The pair both received one perfect 10.0 en route to 9.975 scores on floor at Iowa State on March 4 and against Penn State on Feb. 4 to tie the school record and tie for the event title.
• As a team, Iowa scored 49.225 or higher in all 14 meets this season. Iowa won or placed in the top three in all but one meet this season.
• Iowa set a school record on floor with a 49.650 in the comeback win over Penn State.

B1G WEEKLY HONORS
• Senior Lauren Guerin was named Big Ten Specialist of the Week on March 8 after tying for the floor title and finishing runner-up on vault in the Hawkeyes’ Iowa Corn Cy-Hawk Series victory at No. 26 Iowa State on March 4. The honor is the first of the season and her fourth career.
• Junior JerQuavia Henderson was named Big Ten Specialist of the Week on Jan. 10 after scoring a 9.925 on vault and floor in the Hawkeyes’ win over Eastern Michigan. It was her first career honor.
• Freshman Marissa Rojas earned Big Ten Freshman of the Week honors on Jan. 25 after winning her first career event title in the road win at Michigan State. The Michigan native posted an anchor score of 9.925 to take the title and she also made her floor debut, scoring a 9.800.

KEY NOTES
• The Hawkeyes capped a 196.950 – the third-best score in program history – to win Session 1 and take third overall at the Big Ten Championship on March 19.
• The Hawkeyes logged 64 scores of 9.900 or higher during the 2021-22 season. JerQuavia Henderson led the team with 17 9.900 or higher scores while eight other GymHawks had at least one, including Lauren Geurin and Adeline Kenlin both scoring 14 9.900s or higher.
• The Hawkeyes earned three Big Ten weekly honors this season — junior JerQuavia Henderson was the Specialist of the Week on Jan. 10, Marissa Rojas garnered Freshman of the Week honors on Jan. 25 and Lauren Guerin was the Specialist of the Week on March 8.

21 & COUNTING
Head coach Larissa Libby has led the GymHawks to 21 straight NCAA Regional appearances (either as a team or individually). The 2022 season is Libby’s 18th as Iowa’s head coach and 21st overall with the program. She is a three-time Big Ten Coach of the Year.