THIS WEEK
University of Iowa women’s swimming and diving heads to Minneapolis to take on Minnesota for the Hawkeyes’ second Big Ten meet on Friday, Nov. 11. Events are set to begin at 5 p.m. (CT) at the Jean K. Freeman Aquatic Center.

FOLLOW LIVE
• Live results for the meet will be available on hawkeyesports.com (via the schedule page) and Meet Mobile.
• Fans can also follow the Hawkeyes on Twitter/IowaSwimDive for live meet updates.
• The meet will be live streamed on B1G+ (subscription required).

WHAT YOU NEED TO KNOW
• Iowa kicked off the 2022-23 season with a 192-107 victory against UNI.
• The Hawkeyes enter the season returning seven athletes and welcoming 14 newcomers, including three transfers.
• Amongst the returners are junior divers Sarah Ballard and Claire Hartley and sophomore Makayla Hughbanks, who all qualified to compete in last season’s NCAA Zone D Diving Championships.

HIGHLIGHTING HUGHBANKS
Sophomore Makayla Hughbanks posted career best and zone-qualifying scores off both the 1-meter (288.15) and 3-meter (301.25) springboards in Iowa’s Big Ten opening meet against Nebraska, taking home first place in both events. Hugbanks also was victorious in the season-opening matchup with UNI in the 3-meter dive. 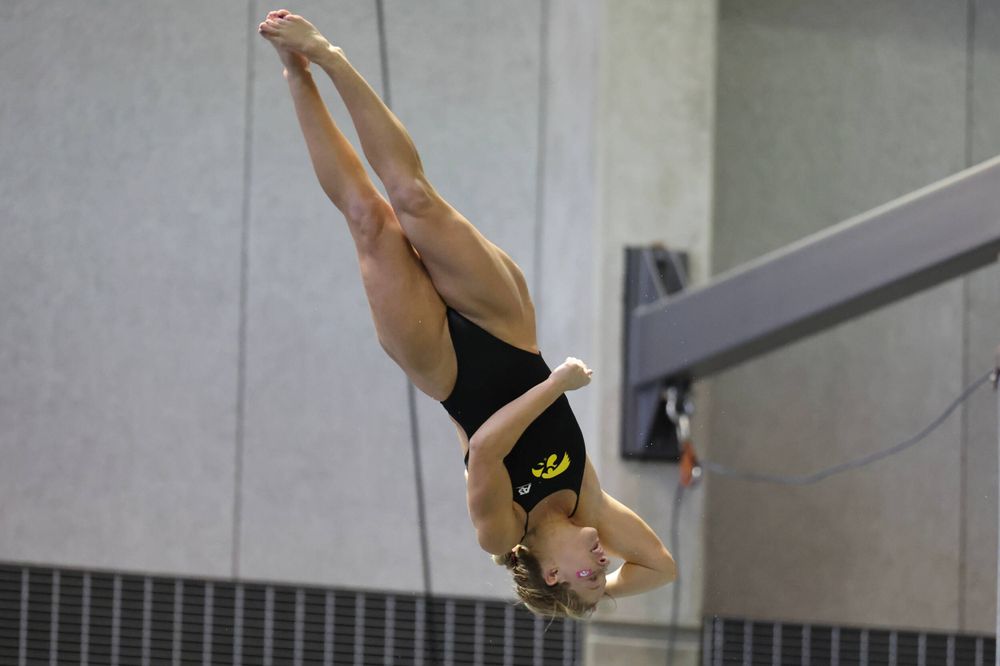 READY FOR RELAYS
The Hawkeyes bring back four swimmers, seniors Kennedy Gilbertson and Aleksandra Olesiak and juniors Maddie Black and Anna Pfeiffer, who led the team in all five relay squads during the 2021-22 season. Gilbertson was a part of four top teams, while Olesiak and Pfeiffer competed on three respective quartets.

THRIVING NEWCOMERS
Iowa has had twelve individual wins amongst its newcoming freshmen and transfers. Denison University transfer Alix O’Brien and freshman Scarlet Martin have combined for half of those victories, each coming away with three wins against UNI. Both the TCU graudate transfer Sheridan Shreiber and freshman Sabina Kupcova also have added multiple wins as well.

REPPING SLOVAKIA
Freshman and Levice, Slovakia, native Sabina Kupcova traveled to the IU Natatorium in Indianapolis to compete in the FINA World Cup. Kupcova raced in the 400 free, 200 free, and 200 individual medley for a chance to qualify for the FINA World Championships.

VETERAN PRESENCE
Senior Kennedy Gilbertson took home gold in the 50 free and 100 back against Nebraska, and also won the 100 back against UNI in the season-opener. Gilbertson also contributed to Iowa’s winning 200 medley (1:45.34) and 400 free (3:29.89) relay quartets against UNI, each of which sitting atop the Hawkeyes’ relay leaderboards on the season. Senior Aleksandra Olesiak also has a 2022-23 individual victory under her belt. The Colorado native posted first place in 200 back against UNI.

UP NEXT
Iowa comes home to host the Hawkeye Invitational on Dec. 1-3. Each day will consist of two sessions, starting at 10 a.m. and 5 p.m. (CT). Live results will be available via MeetMobile and a live stream will be on B1G+ (subscription required).