The Hawkeyes outgained the Badgers, 52-51, on the ground. The Hawkeyes forced three Wisconsin turnovers, and held a 33:37-26:23 advantage in time of possession.

Senior Spencer Petras was 14-for-23 throwing for 94 yards. Senior Sam LaPorta led the team with five receptions for 48 yards. Freshman Kaleb Johnson had 57 yards on 22 carries and a touchdown.

Defensively senior Jack Campbell led the team with 11 tackles (six solo) and sophomore Cooper DeJean had 10 tackles (seven solo) and an interception returned for a touchdown. Deontae Craig had 1.5 sacks for the Hawkeyes to go along with a blocked punt.

“I told the team, we’ve talked about November football, and for me it was a classic example of November football in our conference. Tough conditions weather-wise, and a couple things we really thought coming into the game, we’d have to play tough because Wisconsin is a really tough option. Playing clean football is huge for us and huge for them, and it’s been that way historically in this series, and it’s been that way for both teams really this year, if you look back in the stats for both teams.

Then the other thing is you have to make plays when they do present themselves, and our guys did a good job of that. It wasn’t easy, wasn’t clean, but overall did a really nice job. Just really proud of our players for getting the victory, proud of them for getting the trophy back and having that in our building for a while.

Defense played really well. Good job stopping the run. Outside of a bust we had in the coverage, pretty good job on pass defense, as well. That was good to see.

Had some ups and downs, but more ups on special teams. Obviously, the blocked punt was a big play in the game, and then really the sequence where we were able to kill the ball down on their 1-yard line, give them a long field and then Cooper followed it up with a punt return and then we were able to finish that drive off, that was a really big swing in the game.

Offensively, we have a lot of work to do still. I was kind of disappointed up front. It didn’t look real good for the most part, but a couple positives there when we did get the ball inside the red zone. We finished, put the ball in the end zone instead of field goals, so that was a positive, and then the end of the game, to hold the ball and make them burn their timeouts, I’m not sure I saw that coming, so that was encouraging, too.

They’re a good group. They need more experience, more work, and we’ll get back to work on Monday with them.

Those guys don’t give up, so we’ll be okay there. 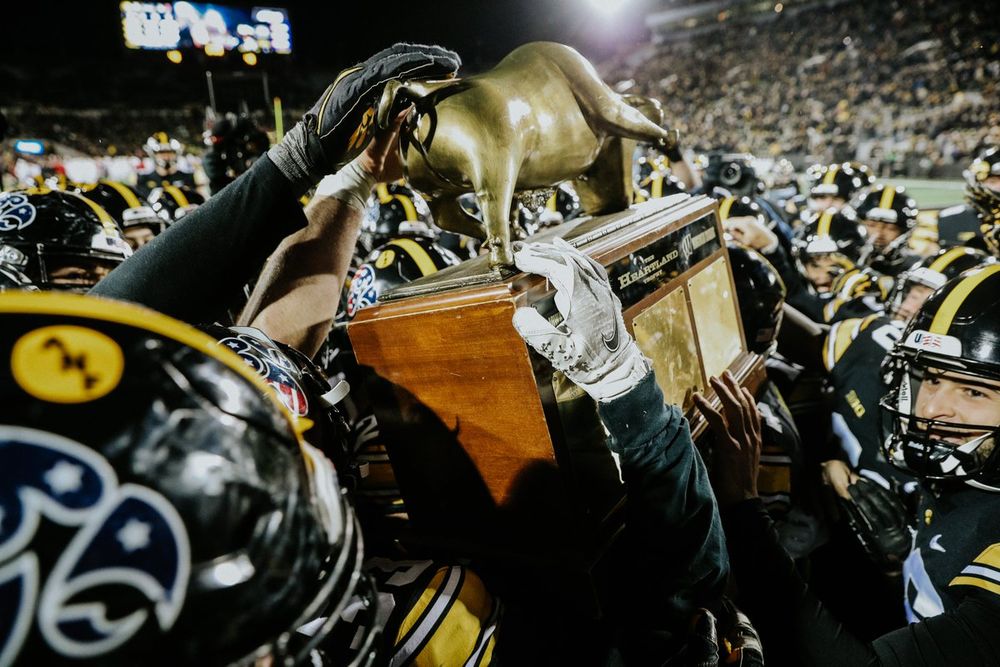 Moss The Boss with an interception! 😎@R_moss5 x @HawkeyeFootball pic.twitter.com/4woxyNnYvg

The Hawkeyes return to action Nov. 19, traveling to Minneapolis to face Minnesota in a battle for the Floyd of Rosedale. The game time has yet to be announced.