Campbell (Cedar Falls, Iowa) earns the honor for the second consecutive season. He has been named first-team All-America by Walter Camp and the Football Writers Association of America (FWAA). He was named Nagurski-Wooden Big Ten Defensive Player of the Year and Butkus-Fitzgerald Big Ten Linebacker of the Year and he earned first-team All-Big Ten honors for the second consecutive season. Campbell was also recognized with the Iron Hawk Award.

Campbell received the William V. Campbell Trophy, presented by the National Football Foundation, and was named the recipient of the Butkus Award, awarded annually to the top linebacker in the nation.

Campbell was the leader of Iowa’s defense throughout the season. He has totaled 118 tackles, which rank second in the Big Ten and tied for 13th nationally. The Cedar Falls, Iowa, native also recorded two interceptions, one recovered fumble and one forced fumble, along with 3.5 tackles for loss. He has 295 career tackles to rank 19th in program history.

LaPorta (Highland, Ill.) was named the Kwalick-Clark Big Ten Tight End of the Year and a first-team All-Big Ten selection. He was one of three finalists for the John Mackey Award, which goes to the top tight end in the nation. 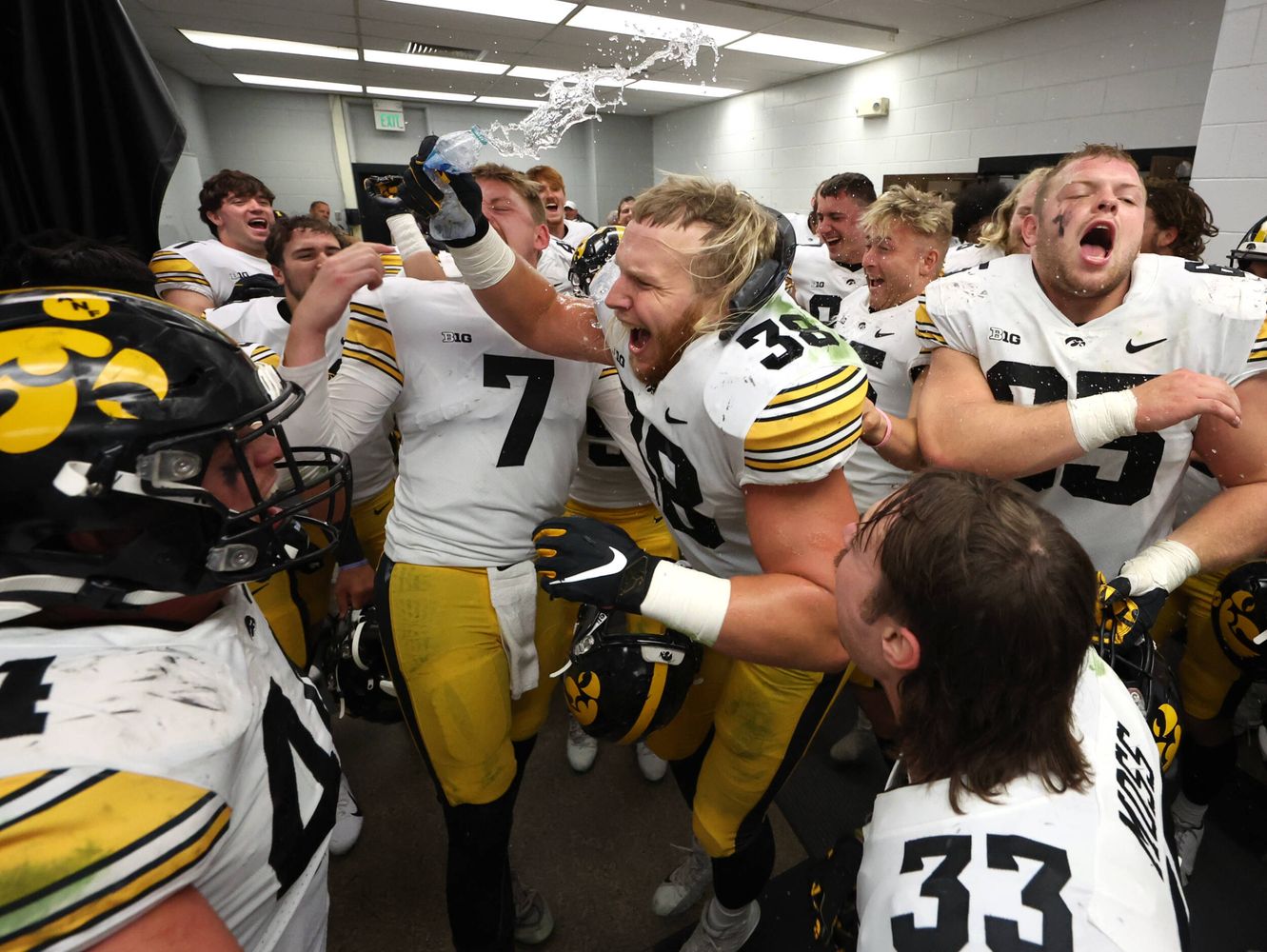 Five team captains were named, including LaPorta on offense, Campbell and senior defensive backs Kaevon Merriweather and Riley Moss on defense, and Taylor on special teams.

Merriweather, a native of Belleville, Michigan, started all 12 games at strong safety, recording 47 tackles and three interceptions. He earned honorable mention All-Big Ten honors and was the Big Ten Sportsmanship Award honoree. He was named Big Ten Defensive Player of the Week for his play in Iowa’s win at Rutgers.

Moss is a native of Ankeny, Iowa, who started every game at cornerback. Moss was named first-team All-Big Ten by league coaches. He is tied for ninth in career interceptions (11), with three of the interceptions being returned for touchdowns.

Taylor, a native of Melbourne, Australia, earned first-team All-America recognition from the FWAA. He was a first-team All-Big Ten selection by the conference media. Taylor handled all punting duties throughout the season, averaging 45.1 yards on 74 punts, with a long of 70 yards. Taylor has placed 32 punts inside the 20 with just 11 touchbacks. He has 22 punts of 50 yards or more, while opponents are averaging just 3.7 yards on 18 returns. In three seasons, Taylor has averaged 45.3 yards on 194 punts, with 89 punts inside the 20 (45.8 percent) and 58 punts of 50 yards or more.

The Brett Greenwood Award was shared by senior fullback Monte Pottebaum on offense and senior end Joe Evans on defense. Established in 2011, the Greenwood Award also honors former Hawkeyes, one year at a time, for each season Kirk Ferentz has coached the Hawkeyes. Greenwood, a former defensive back who lettered from 2007-10, was recognized as the former player.

Senior offensive lineman Matt Fagan received the Forest Evashevski Academic Achievement Award. Fagan has earned Academic All-Big Ten honors each of the past four seasons. He has earned multiple President’s List and Dean’s List honors throughout his career. A health management and policy major, Fagan began his Hawkeye career as a walk-on before earning a scholarship. 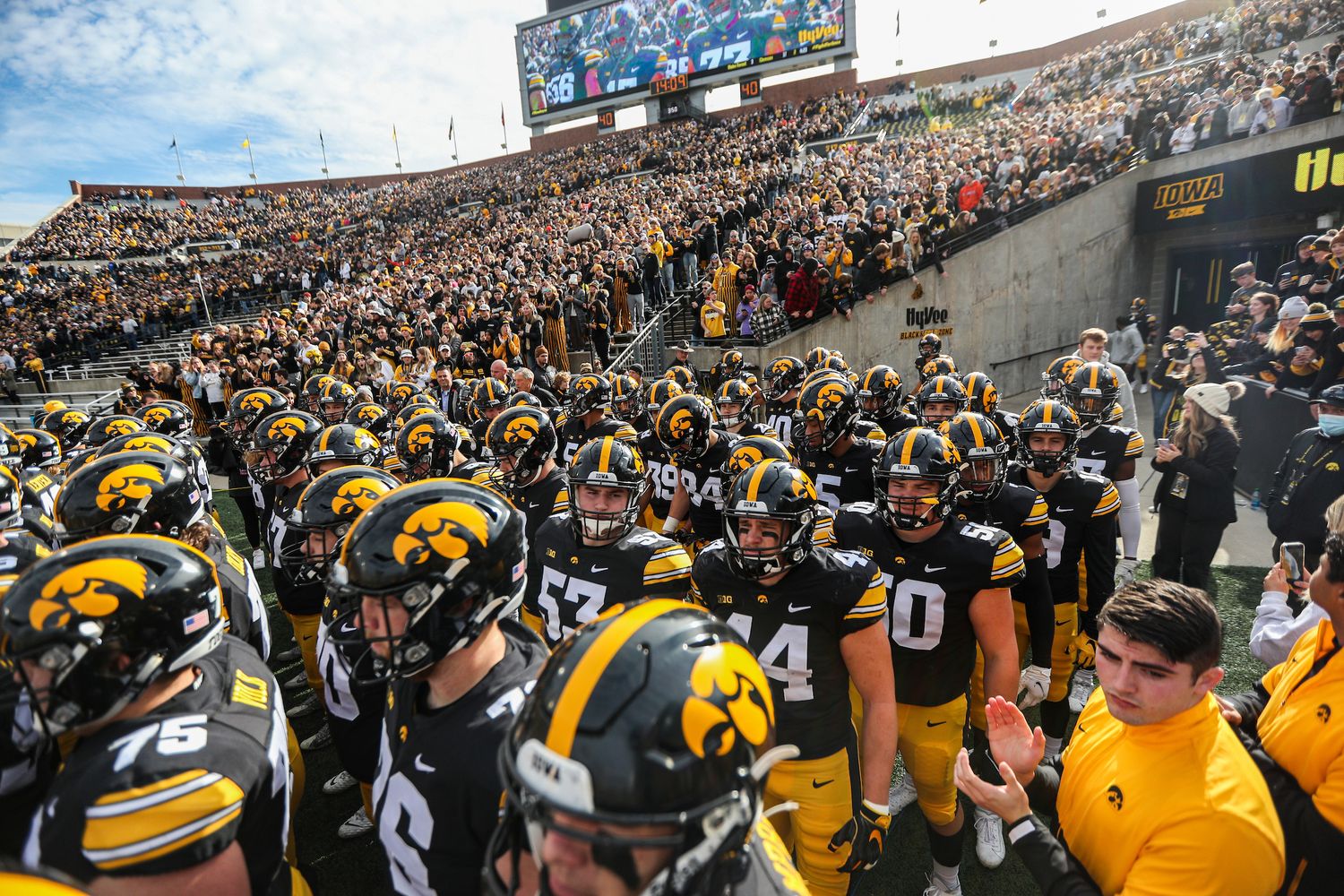 The Reggie Roby Special Teams Award was shared by Taylor as specialist, and sophomore defensive back Cooper DeJean, who was recognized for his overall play. DeJean earned first-team All-Big Ten honors from league media and second-team recognition from coaches. He recorded 68 tackles and four interceptions. Taking over punt return duties late in the season, he averaged 17.6 yards on seven punt returns.

Stevens took over the field goal duties early in the season and led the Hawkeyes in scoring with 69 points. He connected on 16-of-18 field attempts to set an Iowa freshman record for made field goals. His career-long of 54 yards ranks seventh-best in program history. He made all 21 PAT attempts and handled all kickoff duties. Stevens was named second-team Freshman All-America by College Football News.

Johnson earned honorable mention recognition from both coaches and media. He set a freshman rushing record with 762 yards, leading the team with six touchdowns. He rushed for over 100 yards in three games while also averaging 25 yards on 13 kickoff returns. He was honorable mention Freshman All-America by College Football News.

Sophomore wide receiver Diante Vines was presented the Comeback Player of the Year Award. A native of Danbury, Conn., Vines suffered an injury in preseason training camp that forced him to miss the first six games of the season. He returned to play in the final six games, recording eight receptions for 71 yards.

The Bump Elliott Appreciation Award was presented to staff members Greg Morris, Kevin Foor and Kelly Koch. The trio are long-time members of the athletics equipment staff, working with the Iowa football program in all phases of equipment and uniform management.

The 2022 Distinguished Service Award was presented to Barbara Burke. Burke, who joined the Iowa administrative staff in 2016, serves as deputy director of athletics, chief operating officer, and senior women’s administrator. Burke has announced her retirement following the 2022-23 academic year.

The Player Appreciation Award was presented to Brad Heinrichs, a four-year letterman with the Iowa men’s golf program. Heinrich serves as CEO of The Swarm Collective, a non-profit organized to exclusively enable and empower Iowa student-athletes in amplifying their NIL opportunities by contributing their time and diversity of talents through charitable work with non-profits, being active while giving back to Iowa communities, and providing mentorship to the future generation of leaders.