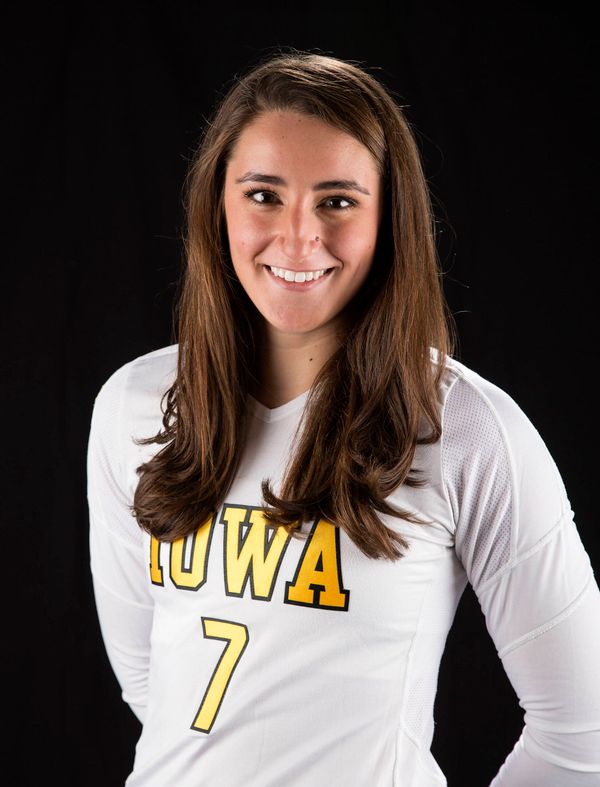 2014 as a Senior… Played in 27 matches with 15 starts… appeared in all but four matches of her career (125-of-129)… appeared in 423-of-466 sets in her career… closes her career ninth all-time at Iowa in kills with 1,279… named to the Texas A&M Invitational all-tournament team after leading Iowa in kills against UTSA (15) on Aug. 29 and Tulane (10) on Aug. 30 and reaching the double-digit kill mark in all three matches… named to the Residence Inn Challenge all-tournament team after helping Iowa to a 2-1 record at Arizona State… posted a season-high 19 kills in Iowa’s win over Idaho State on Sept. 6… recorded a double-double in consecutive matches against North Dakota (18 kills, 10 digs) on Sept. 12 and against Florida International (15 kills, 10 digs) on Sept. 13… came off the the bench at Ohio State on Nov. 19 and recorded seven kills, hit .308 and served up an ace… Academic All-Big Ten… Big Ten Sportsmanship Award recipient… letterwinner.

High School… 2010 PrepVolleyball.com High School All-American… named to the 2010-11 Under Armour All-American Second Team… 2010-11 Gatorade Michigan Volleyball Player of the Year… named a top ten candidate for Michiga’s Miss Volleyball in 2010, having earned All-Catholic and All-Region honors her senior season… selected to the USA Junior National Championships 17 All-Tournament Team and was named an AAU All-American in 2010… earned all-league, all-county, all-region and all-state honors while leading Marina to the 2009 Michigan State Championships… led Marian to state runner-up finishes in 2007 and 2008, earning all-state and all-region honors.. in 2010, she was named Wendy’s Player of the Week and Sunkist Player of the Week on separate occasions… named to the 2008 USA High Performance Regional Team in 2008 and teamed with fellow recruit Erin Leppek to win the USA Junior National Championships while competing for the Michigan Elite in 2010.