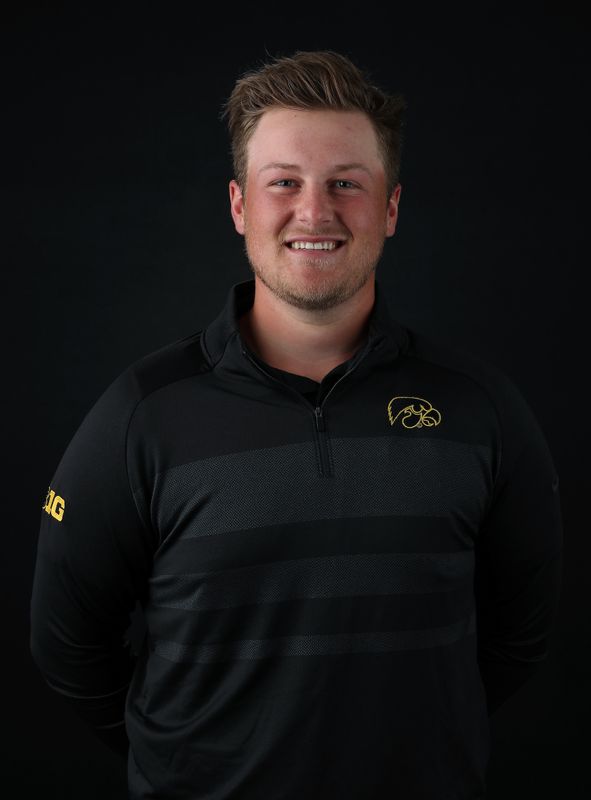 Spring 2020 — Unanimous All-Big Ten First Team selection… named to Division I PING All-Midwest Regional Team… competed in all three tournaments… led Iowa in rounds at or below par (4) and 18-hole stroke average (71.2)… finished 3-1-0 at the Big Ten Match Play Championships… tied for 24th at the Puerto Rico Classic, carding a three-round total of 214 (-2)… recorded his 11th career top-10 finish at the Colleton River Collegiate, tying for seventh with a 54-hole score of 213 (-3)… his three-round total (213) at the Colleton River Collegiate ties for the 12th lowest score in program history… his 12 birdies tied for the fourth highest total among all competitors at the Colleton River Collegiate… season canceled by Big Ten Conference and NCAA on March 12, due to concerns of coronavirus (COVID-19)… letterwinner.

Fall 2019 — Competed in all four tournaments… recorded his 10th career top-10 finish at the Gopher Invitational, tying for a season-best eighth with a 54-hole total an even-par 213… fired season-best 18-hole rounds (69) at the Gopher Invitational and Golfweek Conference Challenge… Iowa’s top finisher in first three events, finishing 19th or better in three of four fall tournaments… recorded two top-20 finishes and one top-10 finish… led Iowa in rounds at or below par (7) and 18-hole stroke average (71.8)… All-Big Ten Preseason Honoree.

Spring 2019 — Named the Men’s Big Ten Golfer of the Year… named to Division I PING All-Midwest Regional Team… unanimous All-Big Ten First Team honoree… earned Les Bolstad Award, leading Big Ten with a stroke average of 70.81… competed in all six events… recorded career bests for 18-holes (63), 54-holes (199), and finish (T1) at the Hawkeye Invitational… his 54-hole score of 199 at the Hawkeye Invitational set a program record… his 18-hole score of 63 at the Hawkeye Invitational is the second lowest in school history, while his final round score of 64 ties third lowest score… named Big Ten Golfer of the Week for his performance at the Hawkeye Invitational… earned the best individual finish for Iowa at the Colleton River Collegiate, finishing second with the eighth lowest 54-hole score in program history of 209 (-7)… tied for 24th at the Big Ten Championships with a three-round total of 223 (-13)… carded a 218 (+5) at NCAA Regionals to tie for 25th… led Iowa with a stroke average of 71.27, a low round of 63, and eight rounds at or below par… letterwinner.

Spring 2018 — Named to Division I PING All-Midwest Regional Team… All-Big Ten Second Team selection … tied for 24th at NCAA Regionals as an individual at seven-over-par (220)… competed in eight events… Iowa’s top finisher in four of six stroke-play events… finished 31st or better in every spring tournament, including top-five finishes at the Southern Intercollegiate and Hawkeye Invitational… finished four-under-par at the Hawkeye Invitational to place second… tied for 18th at the Big Ten Championships… recorded six top-25 finishes… averaged a team-best 71.88 strokes per round, which is the fourth lowest in Hawkeye history since the 1991-92 season… fired an 18-hole low of 67 in the second round of the Southern Intercollegiate… recorded seven rounds at or below par… letterwinner.

Fall 2017 — Competed in all five Hawkeye events… recorded two top-five finishes at Golfweek Conference Challenge (2nd) and Windon Memorial Classic (T5)… at both tournaments he recorded 18-hole season-lows of 68 (-2) and 54-hole career bests of 208 (-8)… averaged a team-best 71.47 strokes per round… posted six rounds at or below par… top-Hawkeye finisher in two tournaments.

Spring 2017 — Competed in seven events… averaged 75.10 strokes-per-round… carded four rounds at or below par… posted a season and career low 66 (-4) at the Big Ten Championship… finished tied for second at the Chechesse Creek Club Dual against Michigan State posting a 71 (+1)… finished with a 2-1-1 record at the Big Ten Match Play to open the season… letterwinner.

Fall 2016 –Competed in three tournaments… averaging 73.78 strokes per round, posting three rounds at or below par… led the Hawkeyes at the Paintbrush Intercollegiate finishing in the top-20, carding a 218 (+2).

High School –Four-year letterwinner at Creighton Prep… helped lead the Junior Jays to three state titles… placed second in the state tournament in 2015 and 2016 and finished third in 2014… garnered all-state recognition from 2014-16… three-time Nebraska Junior Amateur Player of the Year (2014, 2015, 2016) and was ranked No. 26 in the class of 2016 by National Junior Golf Scoreboard… was the No. 1 recruit in the state of Nebraska… two-time Nebraska Junior Amateur Champion (2014, 2015).