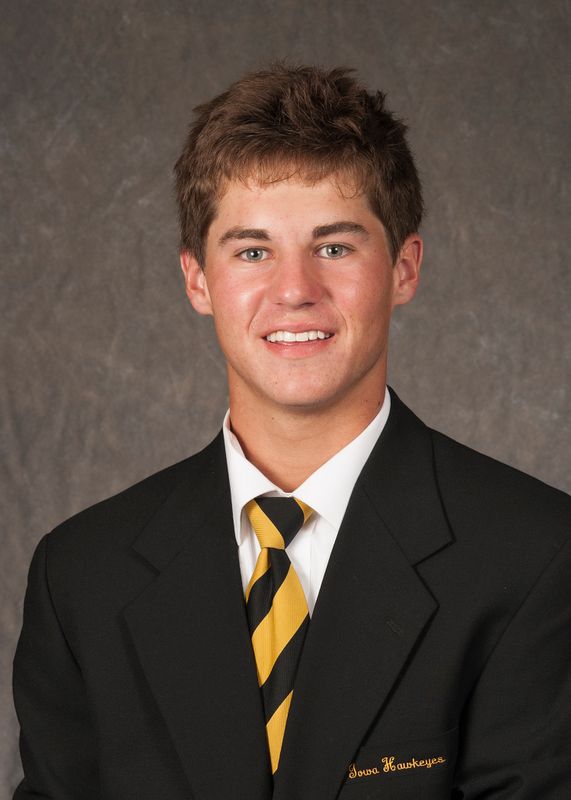 Spring 2017 – Big Ten Sportsmanship Award honoree… competed in every event for the Hawkeyes… averaged 72.31 strokes-per-round – lowest on the team… carded eight rounds at or below par… posted a season-best 68 (-3) at the Mason Rudolph Championship… finished fourth at the Hawkeye Invitational after firing a 54-hole total of 211(-5)… Iowa’s top finisher at three tournaments, with three top 10 finishes… finished tied for third at Robert Kepler Invitational carding a 218 (+5; 75, 70, 73)… led the Hawkeyes at the NCAA Baton Rouge Regional, tying for 35th at 226 (+10; 75, 76, 75)… letterwinner.

Fall 2016 — Competed in all five tournaments, recording a scoring average of 75.40 strokes per round… posted two rounds at or below par, carding his lowest round of 71 during the second round of the Paintbrush  Invitational, helping the Hawkeyes to their season best finish of fifth place… tied for 42nd place at the Golfweek Conference Challenge with a three-round total of 226 (+10), his best finish of the fall.

Spring 2016 — Named to Division I PING All-Midwest Regional Team… played in every event, averaging 73 strokes per round, while finishing at or below par in eight rounds… Iowa’s top finisher in each of the last three events, notching three top 20 finishes… compiled a 1-2-1 record at the Big Ten Match Play Championships… tied for 70th at the Southwestern Jones Invitational, carding a 234 (+18)… Iowa’s top finisher at the Schenkel Invitational, firing a two-under-par 214 (71, 75, 68)… tied for 29th at the ASU Thunderbird Invitational at 217 (+4)… helped the Hawkeyes to a 2nd place finish at the Hawkeye-GRE Invite, carding a 215 (-1) to tie for 10th individually… led the Hawkeyes at the Big Ten Championships, finishing fourth at six-under-par 210 (70, 67, 73) — his best finish and lowest 54-hole score of the year… named to Big Ten All-Championships Team… led Iowa at NCAA Regionals, tying for 11th at 224 (+8; 74, 78, 72)… letterwinner.

Fall 2015 — Competed in all four tournaments, compiling an average of 72.95 strokes per round, which tied for a team best… recorded two top-10 finishes, including a 4th place finish at the David Toms Intercollegiate… posted a team high five rounds at or below par… tied for 39th place at the Gopher Invitational, carding a 225 (+12)… helped the Hawkeyes to a to a team title and the programs fifth best 54-hole team score at the GolfWeek Conference Challenge after posting his best 54-hole score of the season, a six-under-par 210 — he finished tied for seventh individually… recorded his best round of the fall in the second round of the GolfWeek Conference Challenge with a 66 (-6), which also tied for the team’s lowest round of the fall… Iowa’s top finisher at the David Toms Intercollegiate, shooting even-par 216 to finish fourth… tied for 50th at the U.S. Collegiate Championship, posting an eight-over-par 224.

Spring 2015 — Big Ten Champion and first-team All-Big Ten honoree… named to the Division I PING All-Midwest Regional Team… crowned co-champion at the 2015 Big Ten Tournament, marking the third time in program history a Hawkeye has accomplished the feat and first since 1992 (Brad Klapprott)… also recorded the best 18-hole score of his career and the lowest round at the three-day event with a seven-under-par 65 in the opening round on his way to a four-round total of 284 (-4)… competed in five tournaments, leading the Hawkeyes in three of them… averaged 71 strokes per round to lead all Iowa golfers — finished the 2014-15 season averaging 71.17 strokes per round; the second-best average in program history… compiled a 3-1-0 record at the Big Ten Match Play Championships to lead Iowa to a third-place finish… tied for 65th place at the Schenkel Invitational, carding a five-over-par 221… finished in a tie for 19th place at the ASU Thunderbird Invitational after recording a 231 (+3)… led Iowa to a third-place finish at the Hawkeye-GRE Invitational, firing a six-under-par 210 to finish tied for fourth… Iowa’s top finisher at the NCAA Yale Regional, carding a two-under-par 208 to tie for 11th… letterwinner.

Fall 2014 — Competed in all five tournaments, leading the Hawkeyes in four of them… posted a team-best 71.4 stroke average over 14 rounds, finishing at or below par 10 times… finished inside the top 10 twice and inside the top 20 three times… reached as high as 49th in Golfweek’s collegiate individual rankings… led Iowa to a third place finish at the Golfweek Conference Challenge, shooting a one-under-par 215 to tie for fifth place… finished tied for fourth place, a career-high, at the Windon Memorial Classic after recording a career-best 54-hole score of 209 (-1)… carded back-to-back rounds of 72 (E) at the Rod Myers Invitational to tie with fellow Hawkeye Raymond Knoll for 13th place individually at 144 (E)… paced the way for the Hawkeyes at the U.S. Collegiate Championship, finishing tied for 11th place individually after registering a four-under-par 212 (69-71-72)… tied for 16th place at the Royal Oaks Intercollegiate with a three-round total of 219 (+6)… recorded a career-low 68 on 18 holes at both the Windon Memorial Classic and the Royal Oaks Intercollegiate.

High School — Ranked first in the state of Nebraska and 24th in the country for the class of 2013 on the National Junior Golf Scoreboard… qualified for the U.S. Junior Amateur after winning the Nebraska qualifier (75-72)… placed second in the PGA Junior Series at Arbor Links (76-70-71)… placed fifth in the Nebraska Men’s Amateur (76-71-70-71)… placed 17th at the Junior PGA National Championships (74-72-73-72)… won the Nebraska Class A State High School Championship in 2012 (69-73) as a junior… placed 12th in the Class A state championship in 2011 as a sophomore… helped lead team to state championship appearance as a freshman.