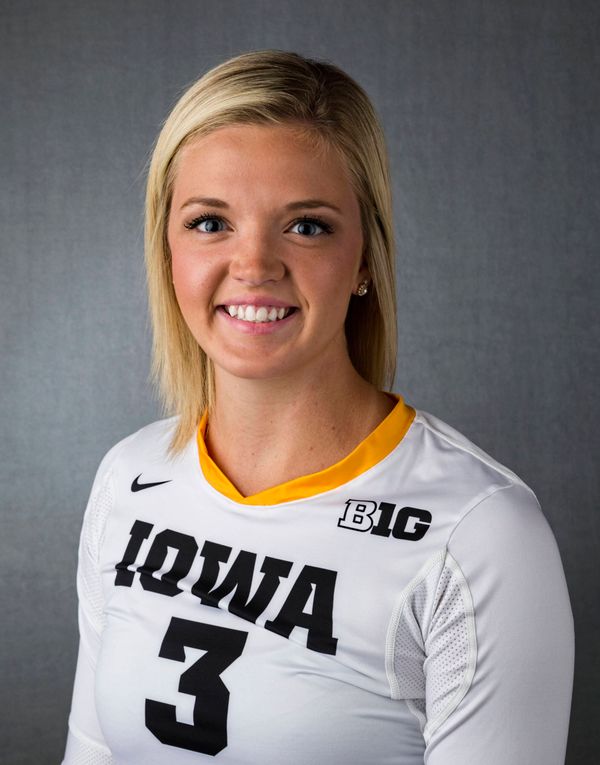 2015 as a Senior… Appeared in five matches… recorded a block against South Dakota State on Aug. 29… recorded two kills against Gardner-Webb on Sept. 18… saw action against Northwestern on Nov. 21 and Michigan State on Nov. 28… Academic All-Big Ten.

2014 as a Junior… Appeared in five matches for Iowa… first appeared in Iowa’s win over Tulane on Aug. 30 and recorded two block assists in the match… saw time as a right side in every match at the 2014 SDSU Challenge… recorded a season-high two kills at South Dakota State on Sept. 13… letterwinner.

High School… Gatorade Player of the Year in 2011… recorded 430 kills, 141 digs, 56 blocks, 48 assists and 32 service aces while posting a hitting percentage of .397 and a kill percentage of .522 during her senior season… two-time Class AA First Team All-State selection… concluded her prep volleyball career with 1,095 kills… holds the school record for kills in a season… first-team all-conference selection in 2010 and 2011… named to the South Dakota state all-tournament team following her sophomore and junior seasons… nominated as South Dakota’s Gatorade Player of the Year in 2010.