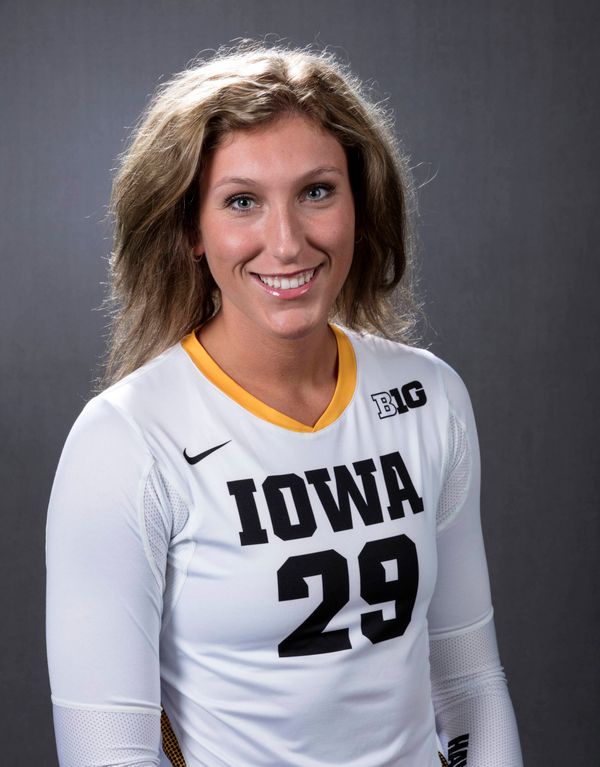 Hawk Items… One of five Hawkeyes to start every match and play in every set in 2015.

2014 as a Freshman… Appeared in all 31 matches with 14 starts… one of seven to play in every match… led Iowa in kills (11) in the opener at Texas A&M on Aug. 29… had her second-straight double-digit kill total (12) against UTSA on Aug. 29… named to the Texas A&M Invitational all-tournament team… recorded the first solo blocks of her career with one against UAB and one against Idaho State on Sept. 6… matched her career-high with five blocks at Arizona State on Sept. 7… posted a career-high 13 kills against Eastern Illinois on Sept. 12 and matched it the next day against Florida International on Sept. 13… posted career-highs with a .353 attack percentage at South Dakota State and three digs against Florida International on Sept. 13… also matched her career-high with a solo block against Florida International… named to the 2014 SDSU Challenge all-tournament team after helping Iowa to a 4-0 record and tournament championship… reached double figures at Michigan on Oct. 10 with 10 kills… set career-highs with 16 kills and 34 attacks in Iowa’s first Big Ten win of the season over Northwestern on Oct. 18… led Iowa with 10 kills at Wisconsin on Oct. 22… matched her career-high with a solo block at Rutgers on Nov. 1… letterwinner.