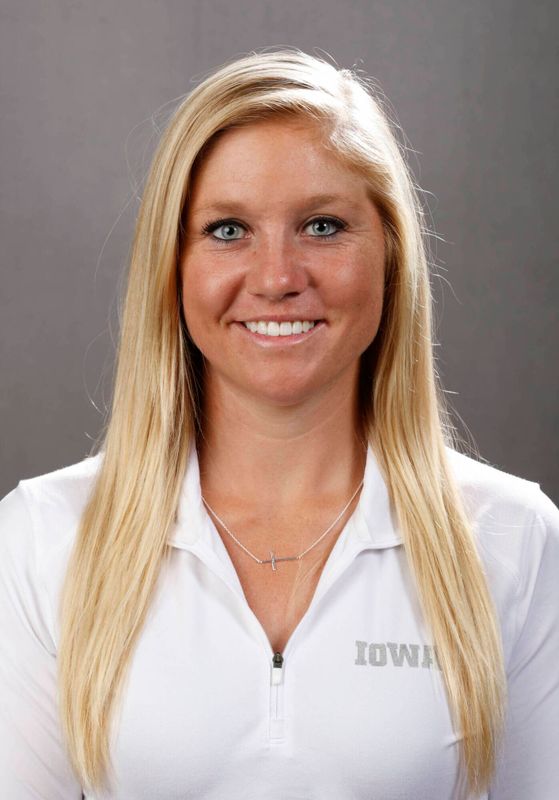 Spring 2016… competed in six tournaments… carded a three round score of 216 (E) to tie for 18th overall and lead Iowa to a ninth place finish at the Westbrook Spring Invitational… Led Iowa at the Edwin Watts Kiawah Island Classic with a 225 (+9), hitting a 75 on all three days to tie for 28th… tied for 17th with a 231 (+15) at the Entrada Classic…Led Iowa at the Texas Tech Red Raider Invitational, tying for fourth with a three round score of 216 (E)… Tied for 11th place at the Lady Buckeye Invitational, carding a 224 (+8)… Placed 21st overall at the Big Ten Championships in Indianapolis, Indiana, notching a 217 (+1) three round score to help Iowa place ninth in the tournament.

Spring 2015… Competed in all six competitions… shot a third round 68 (-4) at the Westbrook Spring Invitational, tying the Iowa women’s golf record for second lowest 18-hole score all-time… registered a 76.5 scoring average, the second best scoring average on the team… was the team’s top finisher at the Big Ten Championships with a three round 226, including rounds of 77, 78 and 71… letterwinner.

2013-14… Competed in every tournament, including 34 rounds… posted a 77.12 stroke average (2,619 strokes)… led the Hawkeyes at four events… recorded two top-20 and one top-10 finish, including the Dick McGuire Invitational (T18), Challenge at Onion Creek (T11), and Rainy Day Shootout (T8)… fired a 70 at the Westbrook Invite to establish her season best 18-hole performance… carded a 156 and a 219, respectively, at the Challenge at Onion Creek to set season best 36-hole and 54-hole performances.

High School… Named the Senior Girls Golf Athlete of the Year by the National High School Coaches Association (2013)… featured in the July 29 (2013) issue of Sports Illustrated — one of six athletes highlighted in ‘Faces in the Crowd,’ a weekly feature highlighting amateur athletes around the nation… qualified for the 38th PGA Junior Championship at Trump National Golf Course in Washington, D.C. (2013)… carded a 36-hole score of 147 (72-75) to finish first in the section championship and qualify for the PGA Junior Championship for the second-straight year… won her fourth-straight individual state title in 2013, becoming the second player in state history to capture four-consecutive titles, and the first to do so in over 50 years… finished eight strokes ahead of the second-place finisher, leading Charles City High School to its second state championship in the last three years… also led Charles City to a runner-up finish at state as a junior… claimed individual conference and district titles as a freshman and junior, along with a district title and conference runner-up finish as a sophomore… the 2010 IWGA Junior Player of the Year qualified for the PGA Junior Championship in the summer of 2012… led Team Iowa to Four State Junior Girls Golf championship in 2012, earning medalist honors… was the only player to shoot under par and only the 10th native Iowan to medal at the event since 1969… also lettered in volleyball and basketball… led her high school volleyball team to a state championship as a senior… two-time first team all-state selection in volleyball, including first team honors as a senior… two-time first team all-conference selection in volleyball… National Honor Society member.

Personal… Daughter of Julie and Mark Sindlinger…mother ran track at Northern Iowa…father lettered in football (1983-86) and wrestling (1985-88) at Iowa…father was the starting center for the 1985 Big Ten championship and Rose Bowl football team…he was also a two-time Big Ten champion and All-American in wrestling…has two younger sisters, Jamie and Jodie…pre-business major.