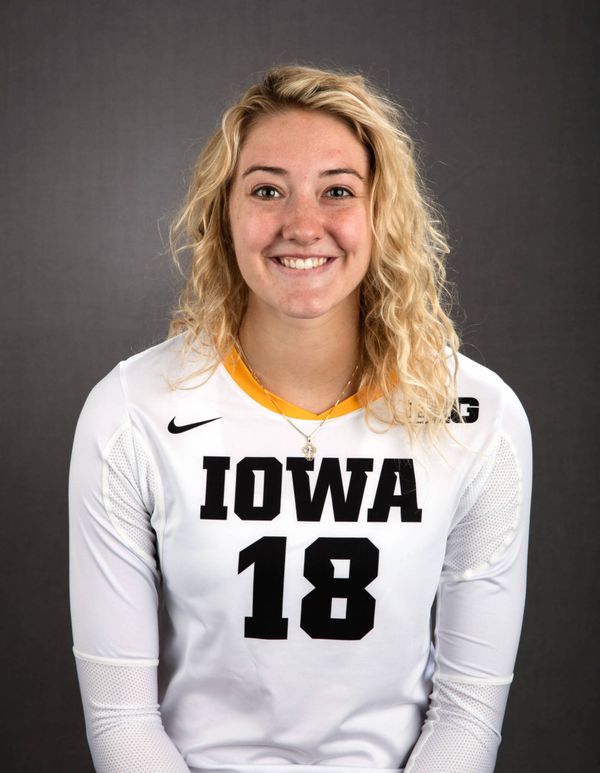 2016 as a Senior… Appeared in all 32 matches…  recorded 1,087 career kills to land at No. 15 in program history… led the team with 288 kills over 100 sets for 2.88 kills per set… registered 27 blocks and 29 digs… amassed 170 kills during league play… tallied 17 kills against No. 14 Michigan State on Nov. 26… racked up seven kills against No. 1 Nebraska on Nov. 19… collected five kills and a career-high .833 attacking percentage against Rutgers (Nov. 16)… had nine kills at No. 11 Penn State on Nov. 5… posted 10 kills in Iowa’s win over No. 24 Illinois… garnered 10 kills and earned her 1,000th career kill against No. 4 Wisconsin on Oct. 21… amassed 12 kills and had a .346 hitting percentage against No. 3 Minnesota on Oct. 22… racked up nine kills in Iowa’s win at Maryland on Oct. 14…  recorded 11 kills in Iowa’s upset win over No. 17 Purdue… led the team with 14 kills in Iowa’s win at Northwestern… posted a team-high 13 kills and registered two blocks against Michigan… led the team with eight kills against Michigan State… hit .381 with 11 kills against South Dakota on Sept. 17… amassed a team-high 11 kills against NDSU… named the MVP of the Hawkeye Classic — second MVP honor in as many weeks… posted a team-high 15 kills against Arizona State on Sept. 2… led team in kills in 3-0 win vs. DePaul (14) and 4-1 win at Northern Illinois (16)… named Northern Illinois Invitational Tournament MVP.

High School… Named first team all-state by the Des Moines Register, IGCA all-district, honorable mention all-state and to the all-tournament team as a senior… named second team all-conference as a junior… helped Bishop Heelan to four-straight conference titles, three-straight state runner-up finishes and the state semifinals as a senior… Also earned letters in basketball and track… Four-year member of the Silver Honor Roll… competed at nationals in 2012 and 2013 with the Nebraska Impact club team… placed second at the Northern Lights Tournament in 2013 with her club team.

Personal… Born on Oct. 14, 1994… parents are Patrick and Deborah Brobst… has a brother, Christian, and a sister, Claire… mother, Deborah, played volleyball and basketball at Briar Cliff University… history major.