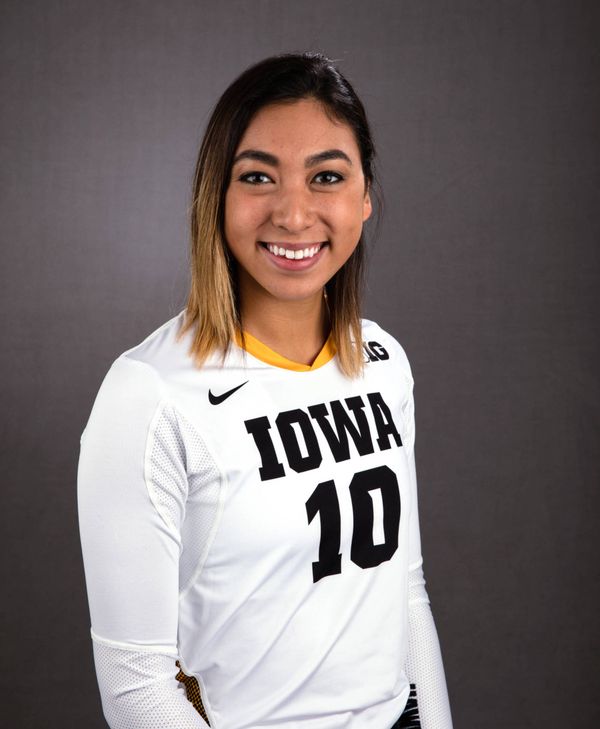 Hawk Items… Joined the Hawkeyes in the spring with two years of eligibility remaining… transferred after two seasons at Missouri… ranks eighth on Iowa’s all-time career assists list with 1,247… one of five Hawkeyes to start every match and appear in every set in 2015… led the team in assists in all 33 matches… named All-Big Ten honorable mention as a senior (first Hawkeye since 2001).

2016 as a Senior… Appeared in all 32 matches as Iowa’s setter… one of just eight in program history to achieve 2,000 or more assists… amassed recorded 2,459 career assists to rank No. 7 in program history… tallied two matches with 60 or-more assists, 13 contests with 40-or more assists and 22 matches with 30-or-more assists… selected honorable mention All-Big Ten, first Hawkeye since 2001 to earn this recognition… had 1,212 assists, 227 digs and 38 assists… one of five players to play all 110 sets… tallied 774 assists in Big Ten action… registered 33 assists against No. 3 Wisconsin on Nov. 23… amassed 42 assists against No. 14 Michigan State on Nov. 26… recorded a double-double against No. 1 Nebraska on Nov. 19 with 23 assists and 10 digs… collected 49 assists in win over Rutgers on Nov. 16…  racked up three kills  and a .500 attacking percentage against Rutgers… tallied 42 assists at Purdue on Nov. 12… also had two kills and a .667 attacking percentage at Purdue… collected 28 assists at No. 1 Nebraska on Nov. 9… racked up 25 assists at No. 11 Penn State on Nov. 5… tied a personal-best five kills and had a .833 attacking percntage at Rutgers on Nov. 4… amassed 32 assists at Rutgers… set a career-high with 65 assists in Iowa’s win over No. 24 Illinois… racked up 47 assists, four kills and seven digs against Northwestern… paced the team with 38 assists and had nine digs against No. 4 Wisconsin… had 64 assists and earned 2,000th career assist against No. 3 Minnesota on Oct. 21… recorded third double-double in a row and fourth of the season with 10 digs against Minnesota… had 20 assists and 14 digs at No. 19 Ohio State on Oct. 15… amassed a personal-best 18 digs in Iowa’s win at Maryland on Oct. 14… chipped in 37 assists at Maryland… tallied a season-high 48 assists in Iowa’s upset win over No. 17 Purdue… registered 45 assists and helped three Hawkeyes to double digits in kills in Iowa’s win at Northwestern… posted first double-double of the season with 32 assists and 10 digs against Maryland… recorded 47 assists, three kills, four digs, an ace, and a block against Michigan… named the 2016 Iowa Invitational MVP… dished out 43 assists and recorded six digs in Iowa’s win over South Dakota… matched career-high with five kills against Lamar… posted a season-high 47 assists to help the Hawkeyes to a 3-0 win against Arizona State on Sept. 2… led team in assists in 3-1 win over Loyola-Chicago on Aug. 27 (43), 3-0 win over DePaul on Aug. 27 (30) and 3-0 win over Northern Illinois on Aug. 28 (43).

2014 as a Sophomore at Missouri… Appeared in every match (33) and every set (128) as a setter at Missouri in a 6-2 offensive scheme… led the team with 718 assists and 5.61 assists per set… second on the team in service aces with 22 (0.17 per set) and third in digs with 264 (2.06 per set)… led the Tigers in assists in 22-of-33 matches… posted 14 total double-doubles in assists and digs over the course of the season and recorded a double-double in seven consecutive contests… guided the Tigers to a 16-17 overall record and a 7-11 mark in SEC play… Missouri earned a No. 15 ranking in the AVCA Division I Coaches Top 25 Preseason Poll.

2013 as a Freshman at Missouri… Appeared as a defensive specialist in all 36 matches and 117 sets… helped the Tigers to a 35-1 overall record and a perfect 18-0 mark in SEC play… Missouri made it to the NCAA Second Round… opened NCAA Tournament action with a 3-0 sweep of IUPUI before falling to No. 19 Purdue 3-1 in the second round… fifth on the team in digs with 214 (1.83 per set)… served up 25 service aces (0.21 per set), good for fifth on the team… served up a career-high 4 service aces in the Tigers’ win over Austin Peay.

High School… Three-time all-state selection and team captain at Iolani High School… lettered all four years… guided Iolani to a third place state finish in 2011… four-time IHL all-league selection… member of the Aloha Region High Performance Team in Fort Lauderdale, Florida… earned the James H. Pott Award, awarded to the high school senior athlete who best exemplifies the standards or personal excellence and sportsmanship for teammates and school… named to the 2012 PrepVolleyball.com Honorable Mention High School All-American Team… earned two varsity letters in basketball, helping the team to two top 3 finishes at the state championship… competed as a high jumper in track… member of the Athletics Leadership Council and Student Council… also served as Iolani Family Fair Chair and Family Fair Advisor, a delegate in the International Women’s Leadership Conference in 2009, an Admission Orientation Guide, and the Homecoming Chair in 2010… named to the Haedmaster’s List from 2010-13… played club volleyball for the Imi Iki Volleyball Club that finished fifth at the Junior Olympic Championship in Dallas, Texas, and four event titles… also played with USA Volleyball at the A1 competitions in 2010 and 2011, and was a member of the 2011 UCA Volleyball Holiday Camp in Colorado Springs.