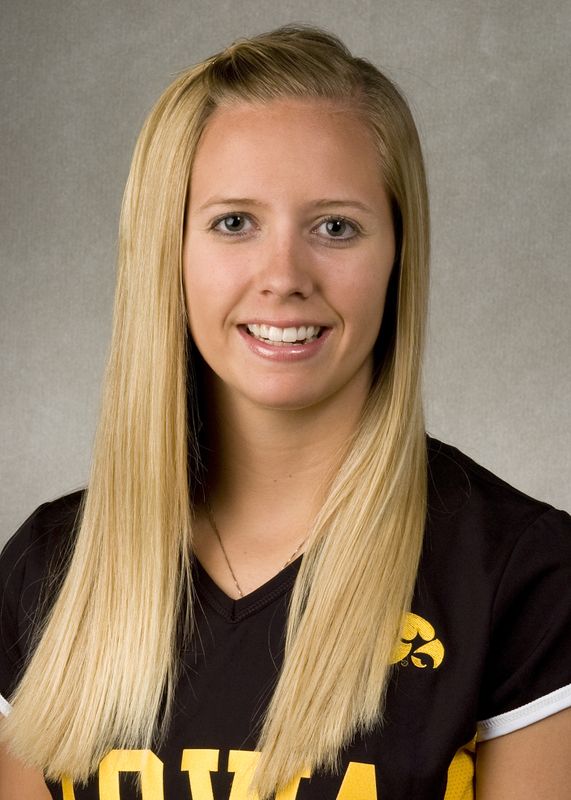 2006 as a Freshman… Saw action in 31 matches, including 10 starts, and 88 games… named Most Improved and received the Coach’s Award… averaged 2.15 kills per game and 2.45 kills per game in conference play… her first career attempt was a game-winning kill in the season opener against Drake (Aug. 25)… had a season-high 16 kills on 51 attempts vs. Eastern Michigan (Sept. 16)… recorded 13 kills and a .423 attack percentage against Indiana (Oct. 6)… posted 14 kills against Purdue (Oct. 7)… had seven kills and a season-high 13 digs against Wisconsin (Oct. 21)… recorded seven kills and 12 digs against Minnesota (Oct. 20)… registered 12 kills, three digs and four blocks against Northwestern (Nov. 4).

High School… Iowa Class 2A Player of the Year as a senior… two-time Elite and first team all-state selection… led her Aplington-Parkersburg team to the 2005 Class 2A State Championship… captain of the all-tournament team… three time first team all-district and all-conference… conference MVP as a junior and co-MVP as a senior… Prep Volleyball All-American nominee as a senior… two-time academic all-conference… set records for most digs in a season (410), kills in a season (420) and highest kill efficiency as a junior… led Aplington-Parkersburg HS to Class 2A runner-up finish as a junior and was named to the all-tournament team after leading the Class 2A tournament in kills and kill efficiency… 2005 Class 1A Doubles Champions in tennis… runner up in 2006 as a senior… three-time conference singles champion… four-time conference doubles champions… four-year honor roll member.