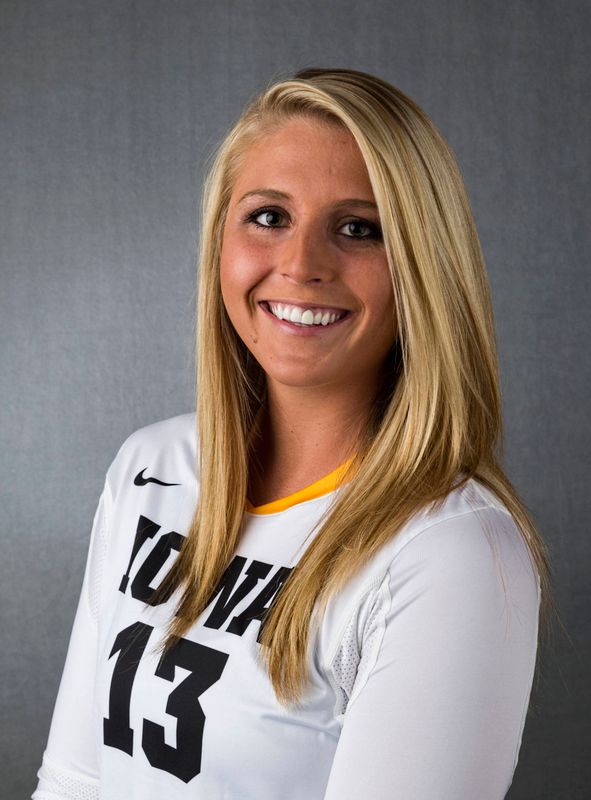 2015 as a Senior… Appeared in every match (33) and every set (115)… broke Iowa’s career attack percentage record with a career mark of .294 — 16 points higher than the previous record… led the team in attack percentage (.333), blocks (90), and blocks per set average (0.78)… posted double digits in kills eight times… recorded a then career-high 11 kills against Northern Illinois on Aug. 30… notched a career-high 14 digs against American on Sept. 6… tallied 11 kills in Iowa’s 3-0 win over Milwaukee on Sept. 11… recorded 12 kills and four blocks against Texas A&M on Sept. 12… named to the Comfort Suites Challenge all-tournament team… posted 10 kills against Coastal Carolina on Sept. 18… matched her career-high with two solo blocks against Coastal Carolina on Sept. 18… was named to the Holiday Inn Hawkeye Challenge all-tournament team… led the Hawkeyes with 10 kills and a .421 attack percentage against Ohio State on Oct. 2… registered 10 kills against Michigan on Oct. 7… posted six kills and two blocks against Michigan State on Oct. 10… led the team with eight kills against Illinois on Oct. 16… tied her career-high with three digs against Northwestern on Oct. 18… led the team with 11 digs against No. 9 Minnesota on Oct. 24 — seven of her 11 kills came in the third set… recorded eight kills, two blocks, and a career-high three digs against Maryland on Oct. 30… posted seven kills and three blocks in Iowa’s win over Rutgers on Oct. 31… hit .364 with six kills in Iowa’s win at Indiana on Nov. 4… recorded nine kills with a .412 hitting percentage against Purdue on Nov. 7… posted six kills and a block against Penn State on Nov. 11… registered nine kills, a .368 attack percentage, three digs, and a pair of blocks against Ohio State on Nov. 18… recorded two kills and a season-high six blocks against Northwestern on Nov. 21… led the team with a .375 attack percentage against Maryland on Nov. 25… Academic All-Big Ten.

2014 as a Junior… Started every match (31) and appeared in 105-of-106 sets as a middle blocker… one of three to start every match… led the team in total blocks (103) and blocks per set (0.98) with eight solo stuffs and 95 block assists on the year… set an Iowa record for blocks in a four set match with nine against UTSA on Aug. 29… posted seven blocks against Tulane on Aug. 30… hit .429 against UTSA with nine blocks on Aug. 29… posted a career-high .714 hitting percentage in Iowa’s win over UAB on Sept. 6… recorded a career-high seven kills and a .600 attack percentage at South Dakota State on Sept. 13… led the Hawkeyes in blocks with four at Iowa State on Sept. 20… posted four block assists at Nebraska on Sept. 24… matched her career-high with one solo block against Nebraska on Sept. 27… matched her career-high with two digs at Michigan State on Oct. 11… set a new career-high with nine blocks and matched career-highs with one solo block and one assist against Illinois on Oct. 15… led Iowa with four blocks in its first Big Ten win over Northwestern on Oct. 18… matched her career-high with a solo block at Wisconsin on Oct. 22… led Iowa with five blocks in its wins over Maryland on Oct. 31 and Rutgers on Nov. 1… matched career-highs with one assist and one solo block at Maryland on Oct. 31 and matched them again against Purdue on Nov. 8 and Indiana on Nov. 5… posted six kills and hit .556 to lead Iowa at Penn State on Nov. 12… matched career-highs with seven kills and 15 total attacks in Iowa’s 3-2 win over Maryland on Nov. 26… letterwinner.

At Wisconsin-Green Bay… Played for the Phoenix as a freshman and sophomore… appeared in four matches as a freshman… appeared in every set (111) of her sophomore campaign… compiled 2.59 kills (2.33 per set) with a .283 attack percentage and led the team with 96 total blocks (10 solo, 86 assists) in 2013.