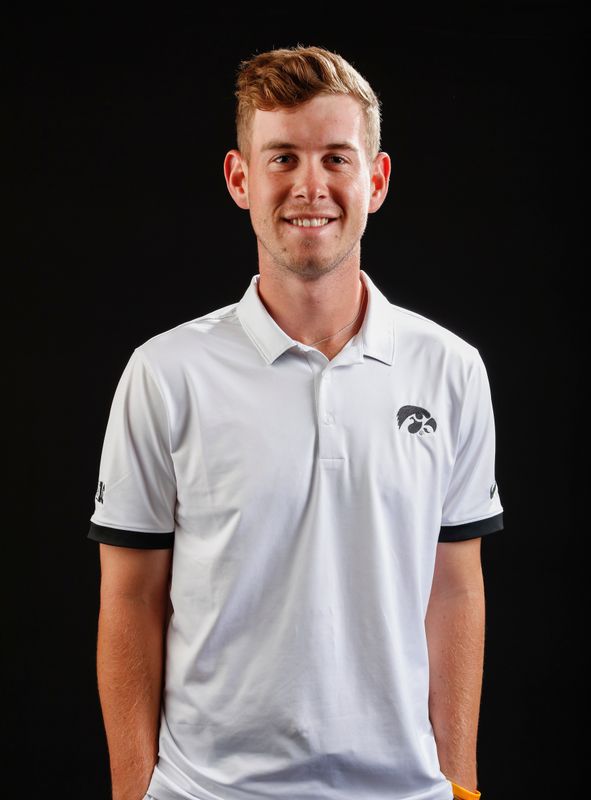 Spring 2017 – Second-team All-Big Ten honoree… named to Division I PING All-Midwest Regional Team for third straight year… competed in every event for the Hawkeyes… averaged 72.94 strokes-per-round on the season… posted eight rounds at or below par with four top-20 and three top-10 finishes for the year… fired a season low 66 (-5) at the Mason Rudolph Championship, while tying his career-low 18-hole record… claimed medalist honors at the Chechesse Creek Club Dual against Michigan State posting an even-par 70… finished tied for eighth at the Schenkel Invitational after carding a 54-hole total of 211 (-5)… finished with a 3-0-1 record at the Big Ten Match Play to open the season… letterwinner.

Spring 2016 — Named to Division I PING All-Midwest Regional Team for second straight year… competed in every event for the Hawkeyes, averaging a team-best 72.11 strokes per round… led the Hawkeyes with 10 rounds of at or below par golf in the spring… led Iowa with four top 20 finishes in the spring, including a fifth place finish at the Big Ten Championships, where he shot a four-under-par 212… went 1-3-0 at the Big Ten Match Play Championships… tied for 17th at the Southwestern Jones Invitational with a 217 (+1)… Iowa’s top finisher at the Schenkel Invitational, tying for 37th at 214 (-2)… carded a 54-hole 212 (-1) to tie for 14th at the ASU Thunderbird Invitational… tied for 13th at the Hawkeye-GRE Invitational with an even-par 216, helping Iowa to a second place finish… named to the Big Ten All-Championships Team after taking sixth place and helping Iowa to a second place finish… fired a 227 (+11) at NCAA Regionals, tying for 22nd place… letterwinner.

Fall 2015 —Competed in all four tournaments, recording an average of 74.33 strokes per round — the second best on the team… his four rounds at or below par tied for the second most on the team… posted two top-20 finishes and was Iowa’s top individual finisher in two events… led the Hawkeyes at the Gopher Invitational, finishing tied for 14th a seven-over-par 220… claimed co-medalist honors at the GolfWeek Conference Challenge with a 54-hole total of 205 (-11; 66, 67, 72) — the lowest three-round total in program history; the title was the first of Knoll’s collegiate career… named Big Ten Conference Co-Golfer of the Week following performance at the GolfWeek Conference Challenge… tied for 39th at the David Toms Intercollegiate, carding a 231 (+15)… fired a 236 (+20) to finish 89th at the U.S. Collegiate Championship.

Spring 2015 — Second-team All-Big Ten honoree… named to the Division I PING All-Midwest Regional Team… averaged 72.63 strokes per round in five tournaments… second on the team in top-20 finishes (six), while posting the third most rounds at or below par (7)… recorded a 1-1-2 record at the Big Ten Match Play Championships… tied for 54th at the Schenkel Invitational, carding a 219 (+3)… Iowa’s top finisher at the ASU Thunderbird Invitational (T-14th) after notching the lowest 54-hole score of his career with a two-over-par 212… also recorded his best round of 18 in the second round with a 68… tied for 23rd at the Hawkeye-GRE Invitational, carding a three-over-par 219… tallied a 299 (+11) at the Big Ten Championships to finish tied for 26th… recorded a three-over-par 213 at NCAA Regionals, tying for 25th… matched his season-best 18-hole score of 68 in the second round… letterwinner.

Fall 2014 — Competed in all five tournaments, averaging 72.3 strokes per round (14 total)… finished inside the top 20 at all five tournaments… tallied a five-over-par 221 (74-74-73) at the Golfweek Conference Challenge to finish tied for 13th individually, a season-best… recorded a 71 (+1) in three-straight rounds at the Windon Memorial Classic, matching his career-best 54-hole score of 213 (+3) to tie for 17th place… shot an even 144 (71, 73) at the Rod Myers Invitational, finishing tied for 13th with fellow Hawkeye teammate Carson Schaake… posted rounds of 73, 71, and 71 at the U.S. Collegiate Championship to finishing tied for 19th individually at one-under-par 215… tallied a 219 (+6) at the Royal Oaks Intercollegiate to finish tied for 16th on the individual leaderboard.

High School — Ranked first in the state of Illinois and 37th in the country for the class 2013 in the AJGA Polo Golf Rankings… Won the AJGA Boyne Highlands Championship (76-68-68)… won the 2012 Illinois Junior Amateur (71-67-72)… qualified for the U.S. Junior Amateur after winning the Illinois qualifier (70-73)… won the MAJGT Windy City Open (71-66)… won the PJGT John Deere Classic (70-74)… placed 13th at the Illinois Class 3A Championship as a freshman… placed fifth in the state tournament as a sophomore… placed third in the state tournament as a junior… Led Naperville North to an undefeated record in conference play over four years… Won individual Conference Championship Tournament title as a sophomore and a senior… Named Conference MVP or Co-MVP as a sophomore, junior and senior… Owns all Dupage Valley Conference individual scoring records… Won five individual titles during senior season at Naperville North with a scoring average of 68.75… Shot a course record score of 64 at State Regional tournament as a sophomore… Named Naperville North’s Athlete of the Year as a senior.