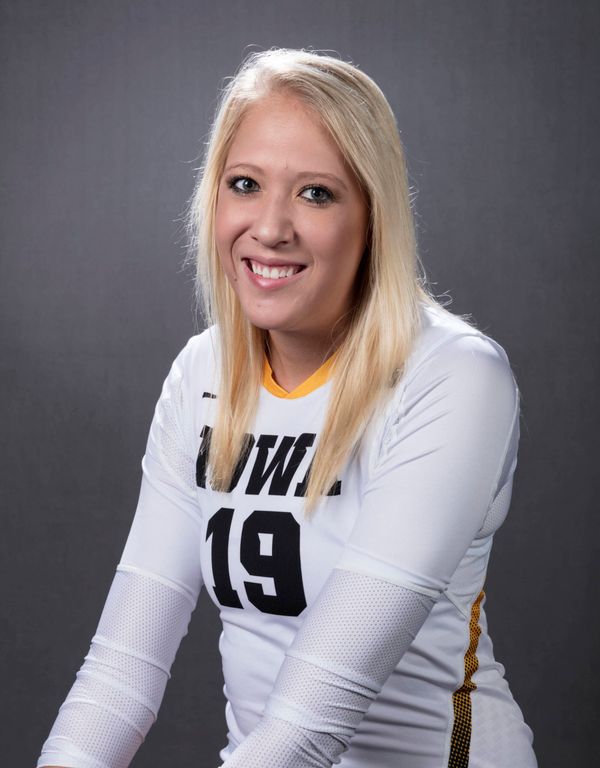 2017 as a Redshirt Junior… Appeared in 17 matches… had 33 kills and 11 blocks… registered 16 kills, eight blocks, two digs, and two assists in Big Ten play…  recorded a kill and two blocks at Maryland on Nov. 17… had second career assist against No. 22 Purdue on Nov. 5… recorded four kills and a block at No. 6 Minnesota on Oct. 15… had three blocks and a kill against No. 3 Minnesota on Sept. 30… recorded five kills against NIU on Sept. 8… recorded six kills, all in the fourth set, against Indiana State on Sept. 2… had four kills and a block against Wright State on Aug. 25.

2014 as a Freshman… Appeared in 28 matches this season with four starts… recorded eight kills and a .583 attack percentage in Iowa’s first win over UTSA on Aug. 29… has hit .400 or above in 10-of-31 matches… recorded a career-high two solo blocks and matched her career-high in total blocks in Iowa’s win over Idaho State on Sept. 6… had a career-high 18 attempts against North Dakota on Sept. 12… posted her the first digs of her career against North Daktoa on Sept. 12 and Florida International on Sept. 13… set career-highs with nine kills and five blocks against Illinois on Oct. 15… set a career-highs with 26 attacks and two digs against Northwestern on Oct. 18… started the first matches of her career at Wisconsin on Oct. 22 and at Minnesota on Oct. 25… posted a career-high three digs at Minnesota on Oct. 25… matched her career-high with nine kills in Iowa’s win over Maryland on Oct. 31 and set a new career-high with 11 kills the next night in the team’s win at Rutgers on Nov. 1… reached double-figures in kills for the second-straight match with 10 against Indiana on Nov. 5… reached double figures in kills with 10 against Wisconsin on Nov. 15 and led the team with a .556 attack percentage… started the season finale against Michigan State, tallying five kills… letterwinner.