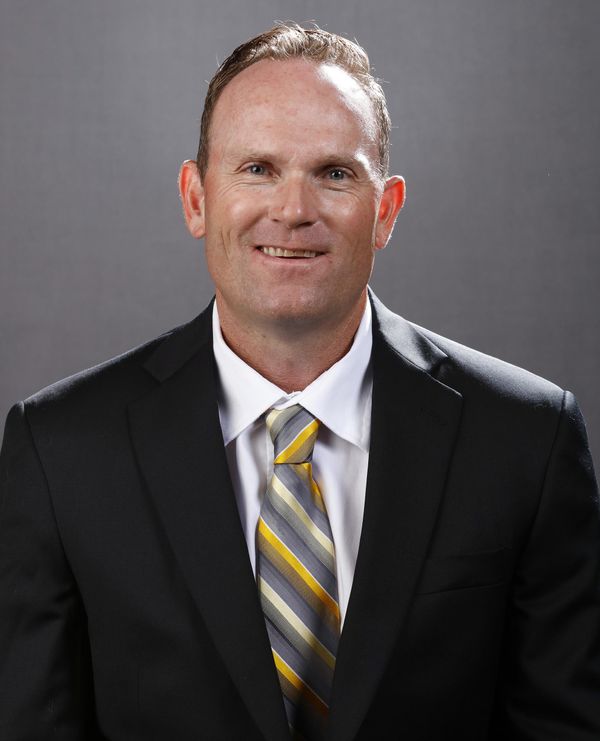 Iowa City native and World Champion runner Joey Woody was named UI director of track and field/cross country in July 2014. He is a four-time Big Ten Coach of the Year and a six-time USTFCCCA Regional Coach of the Year.

In 2022, Woody was named Big Ten Indoor Coach of the Year and USTFCCCA Midwest Region Indoor Coach of the Year. The Hawkeyes broke a total of 10 school records during the indoor season. The Hawkeye men defended their indoor conference title, scoring 117 points to edge Ohio State by 15 points. The Iowa men were led by Big Ten titles in the 600 meters from Jenoah McKiver, the men’s 4×400-meter relay and eight additional medalists. The women finished sixth (59 points) and were led by 60-meter school-record holder LaSarah Hargrove who finished runner up in the 200 meters and third in the 60 meters. The men’s team qualified a program-record number of entries to the NCAA Indoor Championships and had the second most qualifiers in the country, finishing tied for 18th with 14 points. McKiver was the indoor 400-meter NCAA runner up and was named B1G and USTFCCCA Midwest Region Men’s Track Athlete of the Year. In addition to McKiver, Chadrick Richards and Wayne Lawrence earned First Team All-America honors in the 400 meters. Tyler Lienau also finished as a First Team All-American in weight throw. For the women, Mariel Bruxvoort, Tesa Roberts, Payton Wensel and Mallory King earned first-team All-America honors in the 4×400-meter relay. During the outdoor season, the Hawkeyes broke an additional 10 school records. The men won the first Drake Relays Cup for Iowa since 2018 and James Carter, Jr. became the first university division men’s athlete to sweep the horizontal jumps at the Drake Relays in 16 years. The Hawkeye men finished as B1G runners-up (103 points). Julien Gillum became the third-consecutive Hawkeye 400-meter hurdler to claim the Big Ten Title in the event (Jamal Britt – 2021, Chris Douglas – 2019). Iowa’s women replicated their output from the indoor Big Ten meet, scoring 59 points and finishing sixth. Amanda Howe broke her own school record in the hammer throw to win a Big Ten title. Iowa’s men qualified 28 entries to the NCAA West Region prelims – the third-most in the NCAA. From there, they advanced 10 entries to the NCAA Championships. Under Woody, the men qualified a 4×100-meter relay team to the NCAA Final site for the ninth-consecutive season. Only Arkansas and Florida have an active streak as long. In addition, the Hawkeyes qualified a 4×400-meter relay team for the fifth-straight season and a 110m hurdler for the seventh-consecutive year – every year of the Woody era. The men tallied 10 All-America honors (seven First Team), including Austin West (decathlon), Nik Curtiss (shot put), Jordan Johnson (discus) and the men’s 4×400 relay of Everett Steward, Chadrick Richards, Spencer Gudgel and Julien Gillum. The women qualified 18 entries to the NCAA West Prelims and five entries to the NCAA Championships, notching seven All-America honors.

In 2020, the men’s team placed second at the Big Ten Indoor Championships. This is the highest finish for the men’s team since 1963. Iowa had six individual champions, Wayne Lawrence (200M, 400M, 1,600-meter relay), Laulauga Tausaga (weight throw), Jaylan McConico (60-meter hurdles), Raymund Clarke (1,600-meter relay), Antonio Woodard (1,600-meter relay), DeJuan Frye (1,600-meter relay). The 1,600-meter relay broke the school record at the conference meet. Iowa had a total of seven record broken during the indoor season. Wayne Lawrence and Laulauga Tausaga were both name Big Ten Athlete of the Championships and Big Ten Indoor Athletes of the Year. This is the first time Iowa has received this honor for the men’s track team and women’s field. Tausaga earned Midwest Regional Athlete for the second-straight year. Tausaga also was named to the 2020 Bowerman Preseason Watchlist – the first ever Hawkeye to receive this honor. The Hawkeyes were set to have 9 athletes in 8 events at the NCAA Indoor Championships.

In 2014, the men’s 400-meter relay won the Big Ten championship for the second consecutive year. Operating with four new members, the relay broke the school record for the second straight season (39.19), and ran to a sixth-place finish and All-America honors at the NCAA Outdoor Championships.

Woody helped coach Iowa to three Big Ten titles and saw the Hawkeyes break eight school records in 2011. The men’s indoor 1,600-meter relay of Patrick Richards, Ethan Holmes, Sowinski and Steven Willey won its first conference championship since 1984. Woody led Justin Austin to four school records and a 200-meter outdoor conference championship. Austin’s 2011 performance earned him Big Ten Track Athlete of the Year and Big Ten Track Athlete of the Championships honors. He is just the fourth Hawkeye in school history to earn either honor, and he repeated the effort by sweeping both awards in 2013. Woody also helped Holmes qualify for three events at the NCAA Outdoor Championships. Holmes was a member of Iowa’s mile relay, and was the only NCAA student-athlete to qualify for both the 110- and 400-meter hurdles.