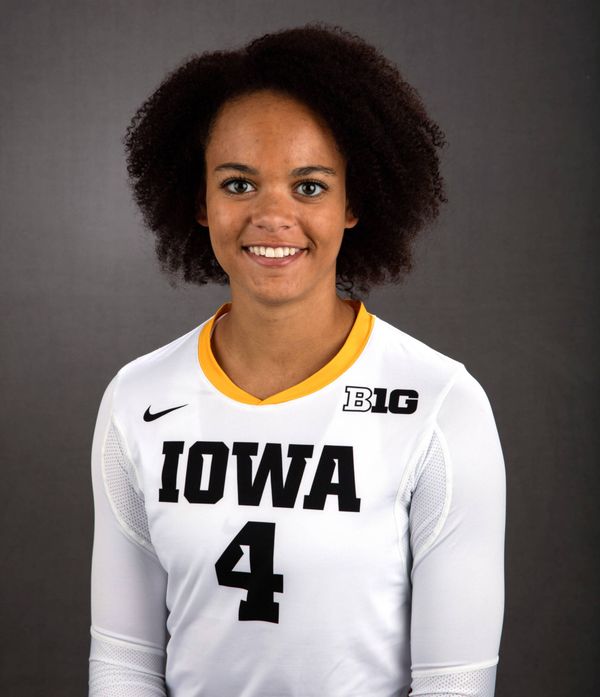 Hawk Items… Transferred to Iowa after two seasons at Tennessee… one of five Hawkeyes to start every match (33) and appear in every set (115) in 2015… led the team with 32 service aces and a 0.28 aces per set average.

2014 as a Sophomore at Tennessee… Played in all 32 matches with 29 starts… led the Lady Vols in kills six times, including three of the final four matches of the season… posted a career-high 18 kills on two occasions, once against Missouri on Nov. 7 and again against South Carolina on Nov. 19… posted a career-high .423 hitting percentage at Coastal Carolina on Sept. 13… compiled a career-high six blocks twice during the season, once at Mississippi State on Oct. 17 and again against Missouri on Nov. 7… fourth on the team in kills (168), kills per set (1.75) and service aces (11).

2013 as a Freshman at Tennessee… Started all 32 matches for the Lady Vols… posted 292 kills, 121 digs, 44 blocks and five service aces… led the team in kills (292) and total attacks (972)… reached double digits in kills in 12 matches… earned consecutive double-doubles against Jacksonville State on Sept. 21 (12 kills and 17 digs) and Coastal Carolina on Sept. 21 (10 kills and 10 digs)… named to the Cincinnati All-Tournament Team after leading all players in the tournament with 72 kills… posted 14 kills and hit a team-high .316 in Tennessee’s sweep of Cincinnati on Aug. 30… compiled 10 kills and four blocks in the first match of her career against Morehead State on Aug. 30.

High School… Four-year letterwinner and team captain at Arlington High School… ranked No. 31 in the 2013 class by PrepVolleyball.com… member of the USA Junior National Team… named to Volleyball Magazine’s Girls’ Fab 50 list, which recognizes the top 50 seniors in the country… AVCA Under Armour All-American Watch List… named Lonestar Volleyball Second Team All-Texas as a senior after leading the Lady Colts to a 36-13 record… named District 4-5A Middle Blocker of the Year as a junior… earned Texas Sportswriters Association All-State Team and Lonestar Volleyball All-Texas Honorable Mention recognition… finished her career with 1,179 kills and 472 blocks and led Arlington to area, bi-district and district championships in 2011 and 2012… also a two-year letterwinner in track and field as a high jumper… played club volleyball for Dallas Summit.