University of Iowa Athletics
Henry B. and Patricia B. Tippie Director of Athletics Chair 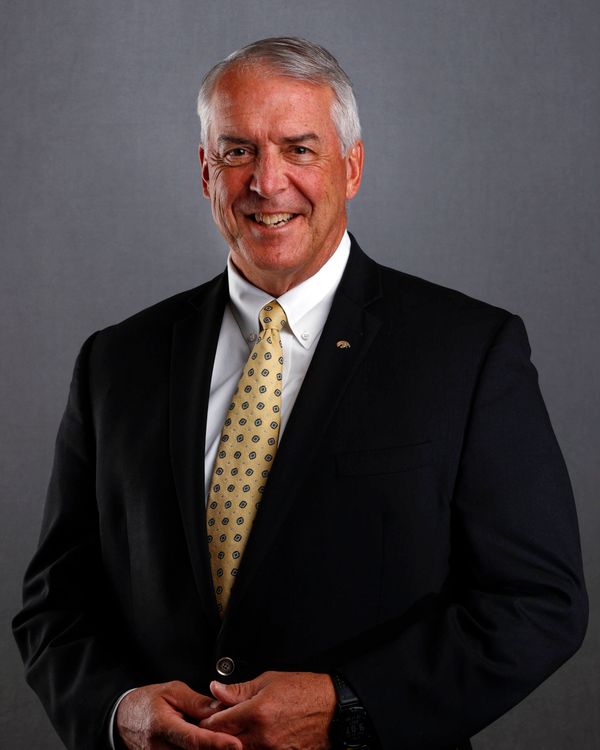 Gary Barta is in his 16th year as the director of athletics at the University of Iowa, where he occupies the Henry B. and Patricia B. Tippie Director of Athletics Chair. The position was endowed in 2017 by the Tippies, longtime supporters of the University of Iowa and Hawkeye Athletics. Henry B. Tippie earned his UI degree in 1949 and was presented with an honorary degree in 2009.

Barta is in his third year as a member of the College Football Playoff (CFP) Selection Committee, serving his second year as committee chairman in 2021. He was appointed to the selection committee by the CFP Management Committee in February, 2019 and is serving a three-year term.

Despite the disruption of college athletics forced by the COVID-19 pandemic during the 2020-21 academic year, Iowa Athletics enjoyed a banner year of success across the board. Iowa earned its highest finish in the IMG Learfield College Director’s Cup since 1997.

Football: After narrow four and one point losses to open the season, Iowa football won six straight games to post an overall 6-2 record, all in Big Ten play. The Hawkeyes were set to face Missouri in the Music City Bowl in late December before that event was canceled due to COVID-19.
Head coach Kirk Ferentz has earned 168 career victories at Iowa, becoming the winningest football coach in school history. Iowa’s win at Penn State was victory No. 100 in Big Ten play for Ferentz, who led his team to trophy game wins over Minnesota, Nebraska, and Wisconsin.
Two Hawkeye players were named Player of the Year at their position in the Big Ten Conference, including unanimous consensus All-American defensive tackle Daviyon Nixon.

Men’s Basketball: Iowa was nationally ranked inside the top 15 all season, ascending as high as No. 3. Iowa earned a No. 2 seed in the NCAA Tournament, matching the highest seed in program history. Iowa’s 14 conference wins are the most in Big Ten play since 1987. The Hawkeyes won eight games against AP Top 25 opponents.
Individually, center Luka Garza was the consensus national Player of the Year and first-team All-American. Garza became Iowa’s all-time scoring leader with 2,306 points, which ranks seventh most in Big Ten history. Garza is the fifth Hawkeye under head coach Fran McCaffery to earn first-team All-Big Ten honors in the last eight seasons. McCaffery has guided Iowa to 20 wins or more in seven of the past nine seasons and upper-division Big Ten finishes eight of the past nine years.

Women’s Basketball: Head coach Lisa Bluder’s team posted a 20-10 overall record and an 11-8 mark in the Big Ten in 2020-21. Iowa made its 26th NCAA Tournament appearance, advancing to the program’s eighth Sweet 16. Freshman Caitlin Clark was named the Big Ten Freshman of the Year, consensus national Co-Freshman of the Year, consensus All-American, and Dawn Staley Award winner. Clark and junior Monika Czinano were first-team All-Big Ten selections. Bluder and her staff led Iowa to its 12th 20-win season over the last 14 seasons and 14th in Bluder’s tenure.
Field Hockey: Iowa advanced to the NCAA Final Four for the 12th time in program history, as Coach Lisa Cellucci was named Big Ten Conference Coach of the Year. Junior Anthe Nijziel was named Big Ten Player of the Year, Big Ten Defensive Player of the Year, and earned All-Big Ten honors. Seniors Ellie Holley and Maddy Murphy also earned All-Big Ten recognition. Holley and Nijziel were named to the NCAA All-Tournament team and the trio were name All-Americans. Fifteen Hawkeyes were named to the Division I National Academic Squad – the most in program history.
Soccer: The women’s soccer team won the Big Ten Conference Tournament for the first time in school history, defeating each of the top three seeds. The Hawkeyes earned the automatic bid to the NCAA Championships, and defeated Campbell, 1-0, in the first round for their first-ever NCAA tournament victory.

Track & Field: The Iowa men’s track and field team won both the indoor and outdoor Big Ten Conference titles. The outdoor squad ended the season with a 12th place finish at the NCAA Championships, Iowa’s highest finish since 1967. Jaylan McConico was named Big Ten Athlete of the Year for outdoor track and head coach Joey Woody was named Big Ten and USTFCCCA Regional Coach of the Year in both the indoor and outdoor seasons. In women’s track, Laulauga Tausaga became a seven-time All-American and was runner-up at the NCAA Championships in discus. Track and field athlete Marissa Mueller was awarded a 2021 Rhodes Scholar, becoming just the second female ever at Iowa to earn that distinction.
Men’s Tennis: The Hawkeyes were led by individual accomplishments; Kareem Allaf became the program’s all-time wins leader with 164 combined singles and double victories and Will Davies tied the school’s all-time doubles benchmark with 71 victories. The doubles team of Oliver Okonkwo and Davies were ranked as high as No. 2 nationally, the highest ranking by a doubles team in school history. They became the seventh doubles team in program history to qualify for the NCAA Championships.

Women’s Tennis: Freshman Alexa Noel led the Hawkeyes to a fourth place finish in the Big Ten. Noel was named the Big Ten’s Player of the Year and Freshman of the Year. Noel won her first 24 matches of the season before falling in the second round of the NCAA Championships. Noel earned first-team All-America honors while being ranked as high as 13th nationally. She is the first All-American in program history.

Women’s Gymnastics: Women’s gymnastics posted a perfect 8-0 record to win its first Big Ten Conference regular season championship, while once again advancing to the NCAA Championships. The Hawkeyes posted four of the top nine scores in program history and highest national ranking, moving as high as No. 7 in the nation. Head coach Larissa Libby earned Big Ten Coach of the Year honors, while Adeline Kenlin was named conference Freshman of the Year and three gymnasts earned first or second-team All-America honors.

Men’s Golf: Head coach Tyler Stith was named Big Ten Conference Coach of the Year after leading Iowa to a second place finish at the conference championships and Big Ten Match Play event. Iowa fell one stroke short at the spring championships while being led by individual champion Mac McClear. Senior Alex Schaake was voted Big Ten Co-Player of the Year for the second time (2019), and earned honorable mention All-America distinction by GolfWeek, while Schaake and McClear were each named first-team All-Big Ten and All-Midwest Region.

Barta’s involvement in the UI campus and the greater Iowa City community extends beyond his position as director of the UI’s Intercollegiate Athletics programs. He is a member of the President’s Cabinet, comprised of vice presidents and other campus leaders who provide counsel to the UI’s president.

Barta remains active at the conference and national levels. He currently serves on the CFP Selection Committee and has been named chair in 2021 for a second consecutive year. Barta is a member of the LEAD1 Board of Directors and just completed a multi-year term on the NCAA Division I Council. He is regularly involved in National Association of Collegiate Directors of Athletics (NACDA) events and activities.

From a state and local community standpoint, Barta has been a regular participant in numerous Chamber and Convention & Visitors Bureau initiatives during his tenure. He is a long-standing member of the UI Partnership for Alcohol Safety Committee and participated for several years on the United Way of Johnson and Washington Counties’ Board of Directors, including a term as chair. Barta also serves on the Iowa Sports Foundation Board of Directors.

Barta earned a Bachelor of Science degree in mass communication and broadcast journalism from North Dakota State in 1987. He was an option quarterback for Bison football squads that won the Division II NCAA National Championship in 1983, 1985, and 1986.