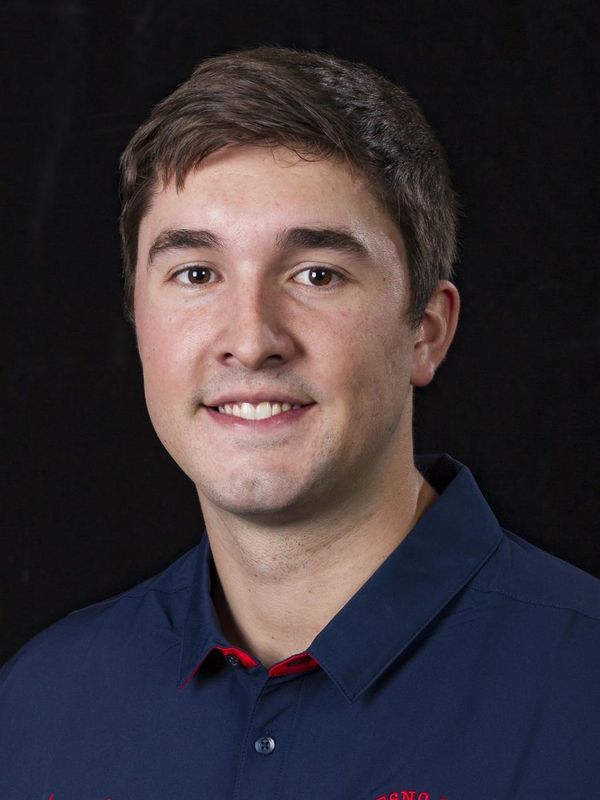 Dylan Chmura is in his third year as a graduate assistant coach with the Iowa football program. He assists with the Hawkeye offensive line after joining the staff prior to 2019 spring practice.

Iowa’s offense in 2020 led the Big Ten in red zone offense (0.917), ranked second in scoring (31.8) and third in fewest tackles for loss allowed (5.1). The Hawkeyes scored at least 25 points in all six wins in 2020. Sophomore center Tyler Linderbaum and senior tackle Alaric Jackson earned first-team All-Big Ten honors, while senior Cole Banwart was a second team selection. Linderbaum was one of three finalists for the Rimington Trophy. Linderbaum and Jackson each earned first and second-team All-America honors from media outlets.

Iowa’s efficient offense in 2019 featured junior tackle Tristan Wirfs, the Big Ten’s Rimington-Pace Offensive Lineman of the Year. Wirfs earned first-team All-America honors from as many as three national outlets. Jackson earned third-team All-Big Ten honors and Linderbaum was named honorable mention All-Big Ten. Wirfs declared for the 2020 NFL Draft following his junior season and was the 13th player selected in the first round of the draft. Wirfs started every game in his rookie season at right tackle for Tampa, including the 2021 Super Bowl.

Iowa ranked third in the Big Ten in fewest sacks allowed in 2019 (1.8), led the league in red zone offense, ranked second in fourth down conversions and fourth in time of possession.

Chmura joined the Hawkeye program from Fresno State, where he worked with the offensive line in 2017 and 2018. Fresno State won the 2017 Hawaii Bowl in posting a 10-4 overall record. Fresno State had the biggest won-loss turnaround in college football after having won just one game in 2016.

In 2017, Fresno State had all starting members of the offensive line earn all-conference recognition. The Bulldogs ranked among national leaders in sacks allowed and tackles for loss while averaging 27.1 points and 380 yards total offense per game.

In 2016, Chmura joined the Michigan State staff as a student coach, foregoing two seasons of eligibility in respect to multiple concussions suffered. He assisted with the Spartan offensive line and tight ends, as well as the long snappers on special teams.

Chmura played as a tight end and long snapper at Michigan State (2013-16). He was a two-year letterman and was a part of Big Ten championship teams in 2013 and 2015. The Spartans won the 2014 Rose Bowl and 2015 Cotton Bowl, while also participating in the 2016 College Football Playoffs.

The Waukesha, Wisconsin, native (Waukesha West High School) joined MSU as one of the nation’s top tight end recruits — ranked by MaxPreps.com (No. 24) and Rivals.com (No. 35). His father, Mark Chmura, played tight end at Boston College and spent seven years with the NFL’s Green Bay Packers (1993-99).