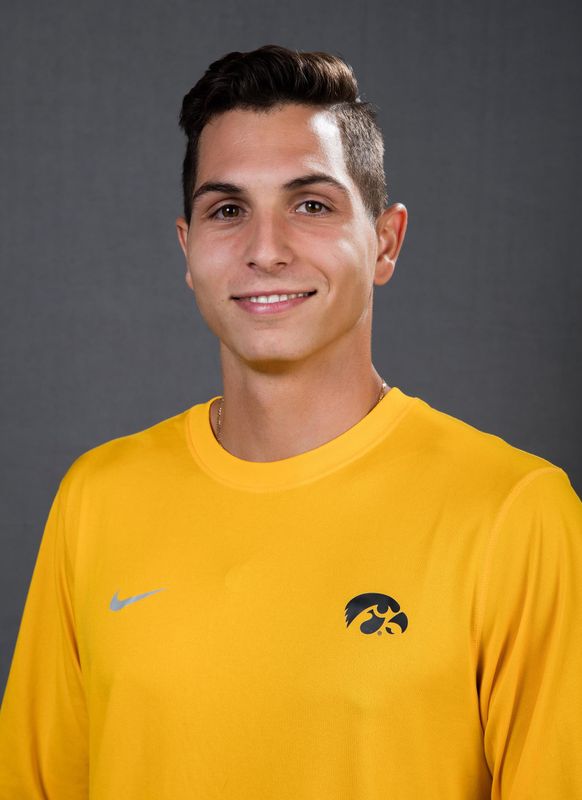 Vince Smurro is in his fifth season as an assistant coach with the University of Iowa women’s gymnastics team.

During his four years in Iowa City, Smurro has guided the Hawkeyes to four straight NCAA Regionals.  He has coached one All-American and 10 All-Big Ten selections, including four first-teamers.

During the 2020 season, the Hawkeyes climbed as high as No. 25 in the national rankings before the season was cancelled because of the global coronavirus pandemic.  Lauren Guerin earned second-team All-America and first-team All-Big Ten honors at season’s end.

In 2019, Smurro helped the GymHawks to a No. 31 national ranking and Big Five session victory. Iowa defeated Arizona in the opening round of the Corvallis Regional behind a 49.200 floor score, but bowed out of the regional in the second round. An influx of young talent  provided a spark for the team.  Junior Clair Kaji garnered first-team All-Big Ten honors, while senior Nicole Chow and Guerin were second-team selections.

During the 2018 season, Smurro helped the team to a No. 33 national ranking and a 13 win season. The GymHawks finished sixth at the NCAA Regional in Minneapolis, Minn. with a total of 195.050. Iowa recorded a season-high 196.400 at the Big Ten Championships to finish fourth overall. Charlotte Sullivan was named to the All-Championship Team for the first time in her career. Smurro coached Sullivan, Nicole Chow, and Melissa Zurawski to season bests on the uneven bars with scores of 9.900. Sullivan at SEMO, Chow at the Big Five Meet, and Zurawski at the Big Ten Championships.

During this first season at Iowa, Smurro helped lead the team to a No. 18 national ranking and an overall record of 25-11, with a conference mark of 13-5. At the Big Ten Championships, the GymHawks finished third and recorded the best championship score in program history with a 196.725. Smurro helped the team to qualify for the Champaign NCAA Regional, where they finished third with a score of 196.050. At the NCAA Regionals, the GymHawks set the school record on beam with a rotation score of 49.600 — shattering the previous record of 49.425. Freshman Clair Kaji and senior Angel Metcalf finished on top of the podium in the event with season-bests of 9.950, which led them to advance to the NCAA Championships. Metcalf competed in the all-around (39.3100), while Kaji appeared as a specialist on beam (9.8625).

The GymHawks complied a vast list of awards throughout the season. A record five gymnasts — seniors Mollie Drenth and Angel Metcalf, juniors Lanie Snyder and Melissa Zurawski, and freshman Clair Kaji — earned All-Big Ten honors. Drenth, Metcalf and Snyder were also named to the All-Championship Team. Zurawski was named Big Ten Gymnast of the Week on Jan. 30, while Kaji and freshman Charlotte Sullivan each garnered Big Ten Freshman of the Week honors twice. Outside the gymnasium, nine GymHawks were named to the All-Big Ten Academic Team — the most to receive this honor since 2010.

Before coming to Iowa, Smurro spent two years as an assistant coach at Central Michigan. The Manasquan, New Jersey, native helped the Chippewas to a 19th-place finish in the final 2015 NCAA rankings, assisting and spotting athletes on vault, bars, and floor. Smurro guided Central Michigan to a first-place finish during the regular season and at the MAC Tournament. He also served as the Chippewas recruiting organizer, travel plan administrator, community service coordinator, and social media manager.

Smurro boasts an impressive collegiate resume. He was a USAG All-American on the high bar in 2010 and the parallel bars in 2011 with the College of William and Mary.

After transferring to Illinois in 2011, Smurro helped the Illini to NCAA and Big Ten Team titles in 2012. In 2013, Smurro finished 10th at the NCAA Championships on floor, recording the third-highest floor score in school history. He also helped the team to a sixth-place finish at the 2013 NCAA Championships.

A two-time College Gymnastics Association First Team Academic All-American, Smurro earned his bachelor’s degree interdisciplinary health at Illinois in 2013. He received his master’s degree in sports administration from Central Michigan in May, 2016.