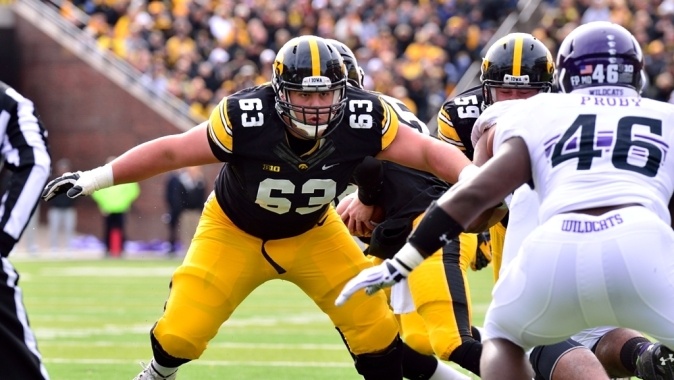 IOWA CITY, Iowa — University of Iowa center Austin Blythe has been named to the 2014 Rimington Trophy Watch List. The Rimington Trophy is presented annually to the most outstanding center in NCAA Division I college football.

As a sophomore last season, Blythe started all 13 games at center and garnered honorable mention All-Big Ten honors. On 10 separate occasions, Blythe played every offensive down as Iowa posted an 8-5 record after competing in the 2014 Outback Bowl.

Behind Blythe and the offensive line, the Hawkeye rushing attack opened the 2013 season on a high note, reaching the 200-yard mark in five straight games. That same unit was also crucial to the Hawkeye passing game, which accounted for 2,383 yards and 18 touchdowns. The Hawkeyes allowed just 15 sacks, the fewest in the Big Ten.

Since its inception, the Rimington Trophy has raised over $2.5 million for the cystic fibrosis community. The 15-year old award is overseen by the Boomer Esiason Foundation, which is committed to finding a cure for cystic fibrosis and has raised over $100 million in CF Research. Past recipients of the Rimington Trophy have included Bryan Stork (Florida State), Barrett Jones (Alabama) and David Molk (Michigan).

Blythe and the Hawkeyes will open the 2014 season by hosting Northern Iowa on Aug. 30 inside Kinnick Stadium. Tickets are available for purchase by contacting the UI Athletics Ticket Office at (800) IA-HAWKS, or online at hawkeyesports.com.

For more information on the Rimington Trophy visit: rimingtontrophy.com .