Michelle Edwards: 'My Time at Iowa was Amazing' 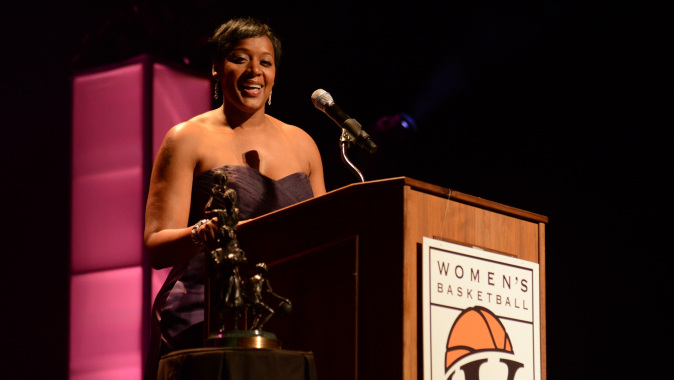 IOWA CITY, Iowa — Former University of Iowa All-American and Women’s Basketball Hall of Fame inductee Michelle Edwards looks back fondly on her career as a Hawkeye.

“The first word that comes to mind is amazing, but I don’t think it’s fair to sum it up in one word,” said Edwards. “Simply because when I went there, I went there to just play basketball. I didn’t go there to do all the great things we did. I wanted to play, win, have fun, and get an education, and it worked out for all of us.”

Edwards is one of the most decorated players in Iowa women’s basketball history.

In June, she became one of the most decorated players in women’s basketball history when she was inducted into the Women’s Basketball Hall of Fame.

“When I reflect on my coaching staff and my teammates, we had something special back then,” said Edwards, currently working as the director of basketball operations at Rutgers. “That is a lot of wins and a small amount of losses in four years.”

As a senior, Edwards led Iowa to its first ever national No. 1 ranking, along with a record of 29-2 overall and 17-1 in the Big Ten. The three-time first-team All-Big Ten selection is the only Hawkeye to have her jersey retired (No. 30).

“I remember Iowa’s academic standards were higher than the NCAA’s,” said Edwards on what she recalled from her days in Iowa City. “The reputation of a Big Ten institution academically, and the fans were great; so supportive. Of course with Dr. (Christine) Grant at the helm, I actually mentioned her in my speech along with coach Stringer and (associate athletics director) Paula Jantz. What a great group.”

Upon graduation, Edwards — inducted into the University of Iowa Athletics Hall of Fame in 2000 — played professionally in Italy for nine seasons before joining the WNBA during its inaugural year in 1997. She then spent three seasons with the Cleveland Rockers and two seasons with the Seattle Storm.

A native of Boston, Massachusetts, it took some convincing for Edwards to visit Iowa City during the recruiting process. Like many UI student-athletes though, upon arrival in the Hawkeye State, she knew it was the school for her.

“First of all, I had no idea where Iowa was,” she said. “When coach Stringer came to visit me in Boston she asked me to pull out a map and that’s when I learned where Iowa was. She got me to visit.

“When I did, people were naturally friendly and seemed to truly care about student-athletes, which happened to be on my checklist of things that were important to me. I wanted to play at a great academic institution, play for a coach that I believed in and would allow me to win championships, and play the best and travel. All of those things encompass the University of Iowa.”

If she had to do it all over again?

“I was sitting with some other players from my time and we were all saying if we had to do it again, would we go back to the same institution? I told them I would definitely go back to Iowa today,” said Edwards. “No regrets at all.”