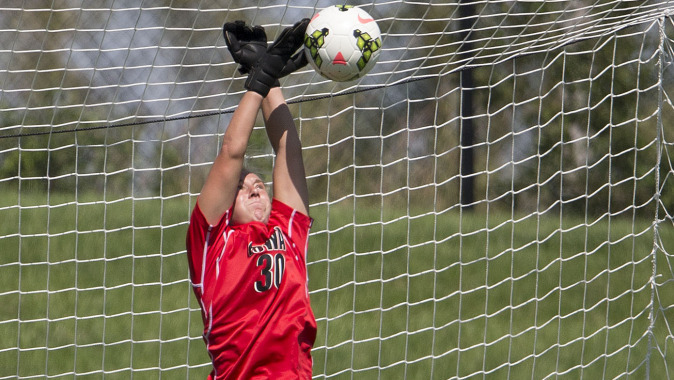 THE MATCH-UP
The University of Iowa soccer team heads to Ames, Iowa, to face Iowa State in the first Iowa Corn Cy-Hawk Series matchup of the season Friday night. The game will begin at 7:30 p.m. (CT) at the Cyclone Sports Complex. The Hawkeyes follow with a road trip to Fort Collins, Colorado, facing Colorado State at `The Lagoon’ on Sunday at 2:30 p.m. (CT).

Friday’s game can be viewed via a live web stream at www.cyclones.com via a pay-for watch service.

QUICK HITTERS
? Iowa has opened the season with a 4-0 start for the fourth-straight season. The Hawkeyes shutout their first three opponents before surrendering a pair of goals Sept. 1 against Butler. The three shutouts are tied for the Big Ten lead.
? Iowa is one of five teams remaining unbeaten in the Big Ten Conference, along with Wisconsin, Michigan State, Penn State, and Rutgers.
? The Hawkeyes have won 30-straight regular season nonconference games. Iowa went 8-0 in nonleague games in 2011 and 2013 and 9-0 in 2012.
? Iowa is out-shooting its opponents, 76-39, in four games this season, which includes a 39-14 advantage in shots on goal.
? Senior goalkeeper Kiley Beck is tied for the Big Ten lead with three shutouts. She is also tops in the conference in goals against average (0.00) and save percentage (1.000).
? Senior Cloe Lacasse is second in the Big Ten in goals (5) and points (11). Lacasse has scored at least one goal in each of the last three contests.

IOWA STATE VS. IOWA — THE SERIES
The Hawkeyes have won the last six meetings in the series with Iowa State, pushing its advantage to 9-5-2 all-time. Iowa has shut out the Cyclones on six different occasions, including a 3-0 victory last season in Iowa City.

COLORADO STATE VS. IOWA — THE SERIES
Sunday’s contest marks the first meeting between the two schools.

GOING HOME Iowa will have a pair of players returning to their hometowns this weekend. Freshman Katharine Woodruff returns to Ames, Iowa, when the Hawkeyes face Iowa State, while junior Hannah Clark heads home Sunday when Iowa faces Colorado State in Fort Collins.

LAST GAME
The Hawkeyes held off a late push from Butler to earn a 3-2 victory on Sept. 1 at the Iowa Soccer Complex. Seniors Cloe Lacasse and Melanie Pickert and freshman Aubree Larson each scored goals to help Iowa pick up its fourth-straight victory.

Cloe Lacasse…
? has scored in three-straight contests for the Hawkeyes, including a pair of two-goal games — the seventh and eighth of her UI career.
? moved into second place in school history in goals and points in Iowa’s 3-0 win over Fresno State. Lacasse currently has 36 goals and 93 points for her career.
? has five goals and one assist for 11 points in 2014. As a junior, she had six goals and seven assists in 23 games.
? is second in the Big Ten in goals (5), points (11), and shots (23).
? is in a six-way tie for second nationally in goals scored.

BECK SHINES IN GOAL
After playing five games total in her first three seasons, senior Kiley Beck has posted three shutouts in Iowa’s first four contests. Beck has a spotless 0.00 goals against average and a 1.000 saves percentage in 330:24 minutes, where she has made nine saves.
? Beck posted her first career shutout and victory in her first career start in the season opening double overtime victory at Northern Iowa on Aug. 23. She followed with her second and third shutout, leading Iowa to wins over Illinois-Chicago and Fresno State.

NEWCOMERS SHINE
– Freshman Katharine Woodruff got the Hawkeyes on the scoreboard in 2014 when she netted the game-winning goal in the 1-0 double-overtime win at Northern Iowa on Sept. 22.
– Freshman Aubree Larson tallied a pair of assists in Iowa’s 4-0 win at Illinois-Chicago on Aug. 24, and she has scored goals in consecutive games, putting her in a tie for second on the team.
– Natalie Krygier, a transfer from Connecticut, leads the team with three assists. The sophomore registered a pair of assists in Iowa’s 3-0 victory over Fresno State on Aug. 29.

BROWN: A CONSTANT
Senior Caitlin Brown is the only Iowa player to log every minute of game action this season. The defender has played every minute for the past 39 games dating back to the 2012 season — a streak of 3,629 minutes.

IOWA NINTH IN REGIONAL RANKINGS
Iowa fell to ninth in the latest Great Lakes Region poll, released by the NSCAA on Sept. 2. The Hawkeyes debuted in the rankings at No. 7. Big Ten schools occupy the top nine spots in the 10-team rankings.

NONCONFERENCE DOMINANCE
Iowa hasn’t lost a regular season non-league game since the 2010 season. The Hawkeyes have compiled a 30-1 nonconference record during the stretch with the only blemish coming at No. 23 Notre Dame in last year’s NCAA Tournament.

SENIOR EXPERIENCE
Senior Melanie Pickert has started all 68 games of her Iowa career, while fellow seniors Caitlin Brown and Cloe Lacasse have started 67-of-68 games as Hawkeyes.

B1G IN THE POLLS
Penn State, Michigan, and Wisconsin are ranked in the latest NSCAA Top 25 poll of the 2014 season. The Nittany Lions are ranked No. 8, the Wolverines came in at No. 10, and the Badgers were voted 19th. Ohio State, Nebraska, and Rutgers are all receiving votes.