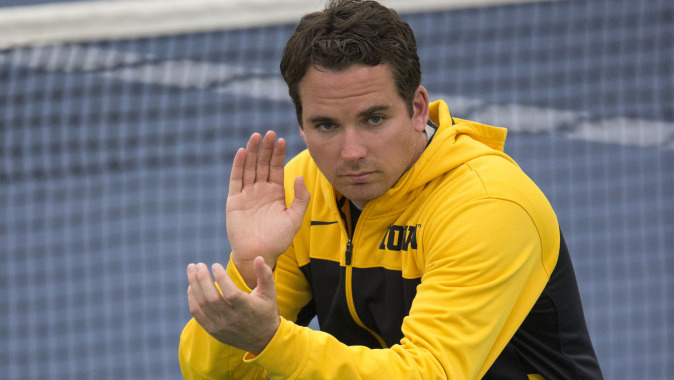 “I am honored to have the support of Coach Houghton, Jane Meyer, and Gary Barta to serve as interim head coach and look forward to building on the momentum we’ve created over the past year,” said Wilson.

“I was recruited by coach Houghton 13 years ago and was drawn to visiting Iowa because of his passion for the Hawkeyes and his affable personality,” added Wilson. “He has been a friend and mentor to me over the past 13 years and I cannot thank him enough.”

In his first season with the UI men’s tennis program, Wilson made an immediate impact, helping the program secure a pair of five-star recruits in Joey Silverstein (Great Neck, N.Y.) and Jake Jacoby (Little Rock, Ark.).

“I am thrilled that Ross has been named interim head coach, excited for both him and our program,” said Houghton. “He was given many `head coaching’ responsibilities last year as an assistant and handled them flawlessly. I am confident that Ross can be not only a good coach, but a great coach.”

Wilson was a standout at national power Ohio State from 2002-06. He was a two-time NCAA All-American and three-time ITA national doubles champion. Wilson broke the Buckeyes’ overall career wins record, career doubles wins record and single season doubles wins record in 2006. He was part of the only doubles tandem in the history of college tennis to ever win back-to-back ITA National Indoor titles (2005 and 2006) and was part of the No. 1 ranked doubles team in the nation those seasons.

Following his collegiate playing career in Columbus, Wilson played two years on the USTA Pro Circuit in 2007 and 2008, winning three ITF Pro Circuit titles. Wilson also coached at the professional level as the personal coach of Sharon Fichman, who was ranked among the top 100 women in the world on the WTA tour.

Wilson helped guide San Diego to an 18-10 overall mark and a 6-2 conference mark in 2013, as the team made its third-straight appearance in the NCAA Tournament. Wilson coached four Toreros to all-conference honors, as San Diego climbed as high as No. 26 in the ITA rankings.

Prior to joining the staff at San Diego, Wilson served as the men’s and women’s assistant coach at Kenyon College from 2010-2012. He helped guide the men’s team to their first NCAA Division III Tournament finals appearance in program history in 2012, while also helping lead the team to a No. 2 final ITA national ranking — the highest in program history. Wilson was named the 2012 ITA National Assistant Coach of the Year and the ITA Central Region Assistant Coach of the Year. He coached three singles All-Americans at Kenyon, one doubles All-American team and an NCAA Tournament singles semifinalist.