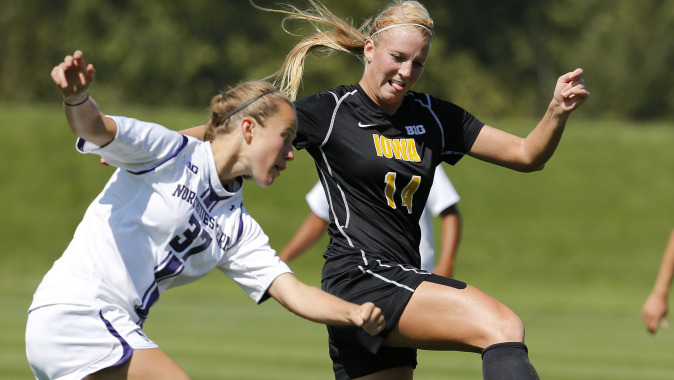 THE MATCH-UP
The 16th-ranked University of Iowa soccer team faces Minnesota at 7 p.m. (CT) on Saturday at Elizabeth Lyle Robbie Stadium in Minneapolis.

ON THE WEB
Iowa soccer fans can follow Saturday’s contest via live stats (GameTracker) on hawkeyesports.com. Click on the “GT” link found on both the front page and the soccer schedule page to access the live stats feed. Fans can also follow @HawkeyeSoccer for live in-game updates.

QUICK HITTERS
? At 2-0 in Big Ten play, Iowa is off to its best start in league competition since the 2007 season. A win at Minnesota would give the Hawkeyes their best Big Ten start in program history.
? Iowa made its debut in the Soccer America rankings, coming in at No. 16 on Sept. 16. It is the first time the Hawkeyes have been ranked since the 2012 season. Iowa is receiving votes in the NSCAA rankings.
? Iowa has a Big Ten-leading six shutouts in eight games this season, three apiece by Kiley Beck and Hannah Clark. Clark is riding a streak of three-consecutive shutouts and a streak of 273:13 scoreless minutes.
? Senior Cloe Lacasse is tied for the Big Ten lead with 18 points and is second with seven goals and 37 shots.
? Iowa has used six diff erent starting lineups in eight games this season. Senior Marissa Hurt made her first career start Sept. 14 against Northwestern.

SCOUTING MINNESOTA
The Golden Gophers are 4-4-0 overall and 1-1-0 in Big Ten play after splitting a pair of overtime matches to open Big Ten play. Minnesota dropped a 2-1 decision at Michigan before rebounding to down Michigan State, 1-0, on Sept. 14. The Gophers have scored 19 goals in eight matches this season, but 10 came in the season opener at Stetson (W, 10-0). Simone Kolander leads the team with 14 points (four goals, six assists), while Sydney Squires has 10 points (four goals, two assists). Nine diff erent Minnesota players have scored this season. Tarah Hobbs has played all but 90 minutes in goal, posting a 1.24 goals against average with 36 saves. Hobbs has four shutouts in seven starts.

MINNESOTA VS. IOWA — THE SERIES
? Minnesota leads Iowa in the all-time series with a record of 10-3-4 against the Hawkeyes.
? Three of the last four contests between the two schools have ended in ties, including the previous two meetings in Minneapolis in 2012 and 2013.
? Iowa last defeated Minnesota in 2007, downing the Gophers in Minneapolis, 1-0, to clinch a berth in the Big Ten Tournament.

LAST GAME
Iowa posted its third-straight shutout, blanking Northwestern, 1-0, on Sept. 14. The Hawkeyes lone goal came in rare form as sophomore Corey Burns bent a corner kick past the Wildcat defense and into the back of the net. The goal was the first of Burns’ career. Junior Hannah Clark tallied three saves in the contest, anchoring an Iowa defense that held Northwestern to 10 shots.

IOWA RANKED 16TH BY SOCCER AMERICA
The Hawkeyes broke into the Soccer America rankings for the first time since the 2012 season when they were ranked 16th in the poll released Sept. 16. Iowa is 1-of-4 Big Ten teams in the rankings.

Iowa is also receiving votes in the NSCAA Top-25 poll that was released Sept. 16.

IOWA FIFTH IN REGIONAL RANKINGS
After falling out of the NSCAA Great Lakes Region rankings last week, the Hawkeyes jumped to fifth in the poll released Sept. 16.

HONORS ALL-AROUND
? Senior Melanie Pickert and sophomore Corey Burns were named to Top Drawer Soccer’s Team of the Week on Sept. 16 after leading Iowa to a pair of shutout victories over Illinois and Northwestern.
? Pickert was also named CS 360’s National Primetime Player of the Week.
? Junior Hannah Clark was tabbed as the Big Ten Conference Player of the Week by College Sports Madness. She made a combined seven saves in a pair of shutouts over Illinois and Northwestern.

CLARK APPROACHING RECORD
With her three-straight shutouts, junior Hannah Clark has pushed her career total to 14, which is one off from tying Emily Moran for the most shutouts in program history (15). Clark is currently riding a scoreless streak of 273:13 minutes.

STELLAR DEFENSE
If you don’t shoot, you can’t score. Iowa’s defense has allowed four or fewer shots on goal in 7-of-8 games this season, and the Hawkeyes have allowed fewer than 10 shots in three contests.

HAWKEYES DISTRIBUTING
Iowa has tallied 15 assists through eight games this year, which puts it in the upper half of the Big Ten Conference in sixth place. Five different Hawkeyes have at least two assists this season with senior Cloe Lacasse leading the team with four.

NEWCOMERS SHINE
– Freshman Katharine Woodruff got the Hawkeyes on the scoreboard in 2014 when she netted the game-winning goal in the 1-0 double-overtime win at Northern Iowa on Sept. 22.
– Natalie Krygier, a transfer from Connecticut, is tied for second on the team with three assists. The sophomore registered a pair of assists in Iowa’s 3-0 victory over Fresno State on Aug. 29.

BROWN: A CONSTANT
Senior Caitlin Brown is the only Iowa player to log every minute of game action this season. The defender has played every minute for the past 42 games dating back to the 2012 season — a streak of 3,989 minutes.

SENIOR EXPERIENCE
Senior Melanie Pickert has started all 72 games of her Iowa career, while fellow seniors Caitlin Brown and Cloe Lacasse have started 71-of-72 games as Hawkeyes.

B1G IN THE POLLS
Penn State, Wisconsin, and Illinois are ranked in the latest NSCAA Top 25 poll of the 2014 season. The Nittany Lions are ranked No. 8, the Badgers follow at No. 9, and llinois checks in at No. 22. Michigan, Rutgers, and Iowa are all receiving votes.

NEXT UP
The Hawkeyes return to action Sept. 25, hosting Maryland at 2:30 p.m. (CT) at the Iowa Soccer Complex. The game will be televised live on BTN.