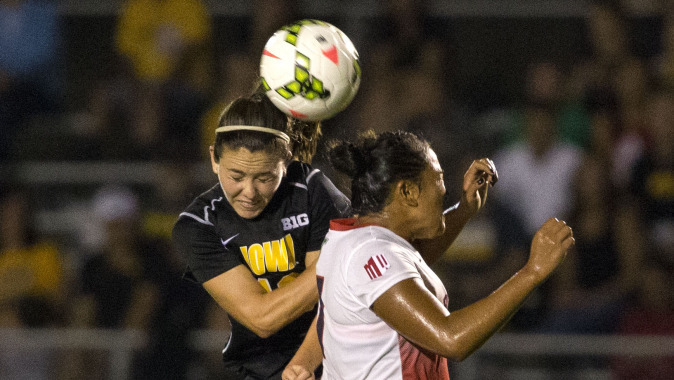 THE MATCH-UP The University of Iowa soccer team returns to Iowa City after three-straight road games to host Indiana and Purdue in its final home stand of the season. The Hawkeyes square off with the Hoosiers on Friday at 7 p.m. (CT) at the Iowa Soccer Complex before facing the Boilermakers on Sunday at 1 p.m. Friday is Senior Night.

WATCH LIVE
Fans can watch Friday and Sunday’s games live on BTN Plus on BTN2Go. The subsciption-based service can be accessed on www.btn2go.com.

PROMOTIONS
Friday night’s contest against Indiana is being billed as a “Pink Out”. Fans are encouraged to wear pink in support of breast cancer awareness and the first 100 fans in attendance will receive free pink poms. It’s also Senior Day. Nine Hawkeye seniors will be honored before the game. Following the game, there will be a full fireworks show. Sunday’s matchup with Purdue is “Fan Appreciation Day”. Fans can register to win a team-autographed Iowa soccer ball.

QUICK HITTERS
? Iowa is tied for second in the Big Ten with nine shutouts in 14 games this season, six by Hannah Clark and three by Kiley Beck.
? Iowa is outscoring opponents by a margin of 21-10 and is outshooting opposing teams, 200-173, through 14 games this season.
? Senior Cloe Lacasse is tied for eighth in the Big Ten in goals (7), fifth in points (18), and third in shots (59).
? Among active players in the NCAA, Lacasse ranks ninth in career points (100), 14th in career goals (38), and 17th in career assists (24).
? Senior Melanie Pickert is tied for second in the conference with three game-winning goals.
? Iowa has used 10 different starting lineups in 14 games this season.

SCOUTING INDIANA
At 5-9-1 overall and 1-7-1 in conference play, the Hoosiers are looking for their first win since a 1-0 overtime victory at Northwestern on Sept. 21. Since Big Ten play began, Indiana has played four overtime games. Jessie Bujouves leads the Hoosiers with five goals scored. Sophomores Marissa Borschke and Molly Pittman are the only two Hoosiers to log every minute of game action this season with 1,415 minutes each.

INDIANA VS. IOWA — THE SERIES
? The Hawkeyes lead the all-time series over the Hoosiers, 9-8-0.
? Iowa has won three-straight games against Indiana. The Hawkeyes won last year’s meeting in Bloomington, 2-1.
? Iowa has shutout Indiana in seven of its nine victories.

SCOUTING PURDUE
The Boilermakers bring a 6-8-1 overall record into Iowa City and a 2-7-0 mark in conference play. Purdue is currently riding a six-game losing streak after falling to Michigan State at home, 2-0, on Oct. 11. Sixteen-year head coach Robert Klatte and the Boilermakers are 2-3-1 on the road. Purdue’s offensive attack is led by Maddy Williams who has scored five goals and recorded five assists.

PURDUE VS. IOWA — THE SERIES
? The Hawkeyes and Boilermakers are dead even in the all-time series, with each school posting six wins. The two schools have tied three times.
? Iowa has won three of its last four matches against Purdue, including a 2-0 shutout victory in Iowa City last season.
? The Hawkeyes and Boilermakers have gone into overtime on six different occasions, with four of those going into double overtime.

LAST GAME
The University of Iowa soccer team battled through two overtime periods to post a scoreless draw against 12th?-ranked Wisconsin on Oct. 8. Iowa’s Hannah Clark added to her impressive resume, tallying six saves on her way to her sixth shutout of the year and 17th of her career. The shutout marks only the second time the Badger’s haven’t scored in a game this season.

IN SEARCH OF WIN NO. 10
With its next victory, Iowa will post its 10th win for the fourth-consecutive season — extending the longest stretch in program history. The Hawkeyes won 13 games in 2011, 12 in 2012 and a school-record 15 games last season.

Cloe Lacasse…
? has scored in four contests this season, including three two-goal games, pushing her career total to 10 as a Hawkeye.
? tallied her 100th career point in Iowa’s 2-0 victory over Illinois on Sept. 11, assisting on Nicole Urban’s strike. Lacasse is the second player in Iowa history to reach the 100-point mark.
? currently ranks second in Iowa history with 38 goals and 100 points. Sarah Lynch is the record holder with 112 points and 46 goals.
? has seven goals and four assists for 18 points in 2014. As a junior, she had six goals and seven assists in 23 games.

IOWA RECEIVING VOTES IN NSCAA POLL
The Hawkeyes received three votes in the NSCAA’s latest poll released on Tuesday afternoon, coming in at No. 35.

IOWA MOVES UP IN REGIONAL RANKINGS
After spending two consecutive weeks ranked No. 6 in the NSCAA Great Lakes Region rankings, the Hawkeyes jumped to the No. 5 spot on Tuesday. Iowa tied with 12th-ranked Wisconsin on Oct. 8. Big Ten schools occupy eight spots in the 10-team rankings, including the top five.

THE HAWKEYES ARE…
? 5-1 when leading at the half
? 9-2 when scoring first this season

CLARK BREAKS SCHOOL RECORD
Junior Hannah Clark posted her fifth shutout of the year and 16th of her career on Oct. 2 in a 1-0 victory at Michigan State to break the school record. Clark currently has 17 career shutouts. Clark posted four-straight shutouts from Sept. 7-20 — a streak that saw 12 saves over the course of 379:26 scoreless minutes. Clark has recorded a streak of four-straight shutouts in back-to-back seasons.

PICKERT FINDING HER GROOVE
Senior Melanie Pickert has scored in two of the last three games for the Hawkeyes, netting goals at Michigan State on Oct. 2 and Michigan on Oct. 5. The Canton, Michigan, native is second on the team in goals scored with six and leads the team with three goals in conference play. Three of Pickert’s six goals came via corner kicks.

FIRST TIMERS
Sophomore Natalie Krygier became the fourth Hawkeye this season to score her first career goal when she found the back of the net in Iowa’s game at Michigan Oct. 5. Freshman Aubree Larson and sophomores Amanda Lulek and Corey Burns have also scored their first career goals in 2014.

STELLAR DEFENSE
If you don’t shoot, you can’t score. Iowa’s defense has allowed four or fewer shots on goal in seven games this season, and the Hawkeyes have allowed fewer than 10 shots in six contests.

HAWKEYES DISTRIBUTING
Iowa has tallied 19 assists through 14 games this year. Seven different Hawkeyes have recorded an assist this season with senior Cloe Lacasse and sophomores Bri Toelle and Corey Burns all tied for a team-high with four.

BROWN: A CONSTANT
Senior Caitlin Brown is the only Iowa player to log every minute of game action this season. The defender has played every minute for the past 48 games dating back to the 2012 season — a streak of 4,549 minutes.

SENIOR EXPERIENCE
Senior Melanie Pickert has started all 78 games of her Iowa career, while fellow seniors Caitlin Brown and Cloe Lacasse have started 77-of-78 games as Hawkeyes.

HAWKEYES ON TV
The Hawkeyes’ Sept. 25 home contest against Maryland will be broadcast live on BTN. The network will also be televise the Big Ten Tournament from Nov. 5-9 in West Lafayette, Ind. Iowa will also appear four times — Illinois (Sept. 11), Northwestern (Sept. 13), Indiana (Oct. 17), and Purdue (Oct. 19) — on BTN Plus (which can be accessed via www.btn2go.com).

B1G IN THE POLLS
Penn State, Rutgers, Wisconsin and Michigan are ranked in the latest NSCAA Top 25 poll of the 2014 season. The Nittany Lions are ranked No. 11, the Scarlet Knights follow at No. 14, the Badgers come in at No. 15, and the Wolverines sit at No. 24 spot. Iowa is also receiving votes.

NEXT UP
The Hawkeyes return to action Oct. 24, playing the first of three-straight road games at Ohio State beginning at 6 p.m. (CT).