Iowa and No. 11 Wisconsin Meet in B1G Tournament Final 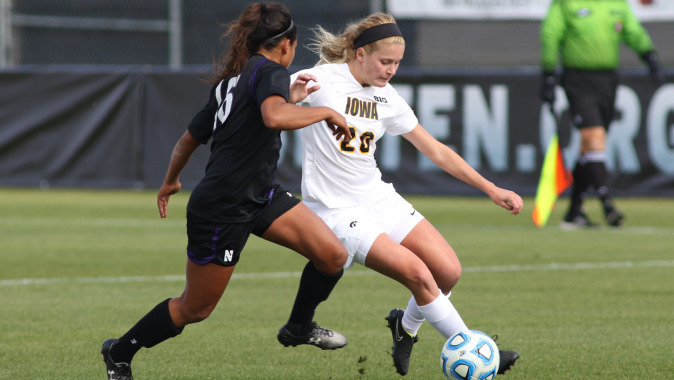 THE MATCH-UP
The fifth-seeded University of Iowa soccer team takes on No. 2-seeded and 11th-ranked Wisconsin in the Big Ten Tournament title game on Sunday at 2 p.m. (CT) at the Boilermaker Soccer Complex in West Lafayette, Indiana. The game will be televised live on BTN.

WATCH LIVE
Sunday’s game will be televised live on the BTN beginning with Dean Linke and Danielle Slaton on the call.

ON THE WEB
Iowa soccer fans can follow Sunday’s contest via live stats (GameTracker) on hawkeyesports.com. Click on the “GT” link found on both the front page and the soccer schedule page to access the live stats feed. Fans can also follow @HawkeyeSoccer for live in-game updates.

IOWA’S B1G TOURNAMENT HISTORY
? Iowa is now 4-7-1 all-time in the Big Ten Tournament with all four victories coming since 2013.
? It is the second-straight season the Hawkeyes have advanced to the Big Ten Tournament title game. Last season Iowa downed the No. 2 and No. 3 seeds (No. 8 Michigan, No. 20 Penn State) en route to a title game appearance — a 1-0 loss to top-seeded Nebraska.
? The Hawkeyes are the fourth team in Big Ten history — the first since Illinois in 2011 and 2012 — to advance to consecutive tournament finals. Other teams include Penn State (1998-2001) and Wisconsin (1994-96).
? Iowa is the No. 5 seed for the first time in program history. The Hawkeyes have been the No. 3 and No. 7 seeds once and the No. 6 and No. 8 seeds three times each.

B1G QUICKIES
? Junior goalkeeper Hannah Clark has a 4-1 record with a 0.33 goals against average in six career Big Ten Tournament games. She has 29 saves and four shutouts in six contests.
? Sophomore Natalie Krygier and senior Cloe Lacasse have accounted for Iowa’s two goals in the Big Ten Tournament. Krygier scored in the team’s 1-0 win over No. 23 Rutgers, while Lacasse sent in the game-winner in a 1-0 triumph over Northwestern.
? Iowa’s win over Rutgers was the team’s first victory over a ranked opponent this season. The Hawkeyes are 1-2-1 against ranked teams.
? Friday’s victory over Northwestern moves Iowa’s record to 14-6-1 this season. The 14 victories are the second most in a single season in school history. The Hawkeyes won a school-record 15 games last season.
? Iowa will be without the services of first-team All-Big Ten defender Melanie Pickert, who suffered a season-ending injury in the first half in Wednesday’s quarterfinal win over Rutgers.

QUICK HITTERS
? Iowa ranks second in the Big Ten with 12 shutouts, nine by Hannah Clark and three by Kiley Beck. The 12 shutouts are the most in a single-season in school history. Clark’s nine shutouts are the second-most individually in a single season all-time.
? Iowa has allowed 16 goals in 21 contests for a 0.75 goals against average. The goals allowed and goals against average are the fourth-best in the Big Ten.
? Senior Cloe Lacasse is tied for second in the Big Ten in goals (12), ranks second in points (30), fourth in shots (81), and tied for 10th in assists (6).
? Among active players in the NCAA, Lacasse ranks ninth in career points (110), 15th in career goals (42), and ranks 19th in career assists (26). The senior is also one of 14 active players to amass at least 30 goals and 20 assists throughout her career, ranking sixth. Lacasse’s goal and three shots in Friday’s semifinal game of the Big Ten Tournament are not accounted for.
? Senior Melanie Pickert is tied for third in the conference with four game-winning goals, which are tied for the sixth most in a single season in school history.
? Iowa has used 11 different starting lineups in 22 games this season.

SCOUTING WISCONSIN
Wisconsin finished second in the Big Ten during the regular season, posting a 9-2-2 record in league play, and is 17-2-2 overall. The Badgers bring one of the most prolific offenses in the Big Ten into Sunday’s championship matchup against Iowa. Wisconsin, ranked 11th in the country, ranks first in the conference in shots (309), second in goals (39), fourth in assists (28), and third in points (106). The Badgers roster features five players that earned All-Big Ten honors, including Big Ten Goalkeeper of the Year, Genevieve Richard. The fifth-year senior has helped Wisconsin to 14 of its 16 shutouts through 21 games this season and has a conference-best 0.34 goals against average and .908 save percentage.

WISCONSIN VS. IOWA — THE SERIES
Iowa is 5-10-3 all-time against Wisconsin. The Hawkeyes have won two of the last four in the series and battled the Badgers to a scoreless draw earlier in the season on Oct. 8

Iowa and Wisconsin have never met in the postseason prior to Sunday’s championship matchup.

Cloe Lacasse…
? earned first-team All-Big Ten honors as a senior — her second career All-Big Ten recognition.
? has scored in eight contests this season, including four two-goal games, pushing her career total to 11 as a Hawkeye.
? tallied her 100th career point in Iowa’s 2-0 victory over Illinois on Sept. 11, assisting on Nicole Urban’s strike. Lacasse is the second player in Iowa history to reach the 100-point mark.
? tied the career points record in Iowa’s 1-0 semifinal victory over Northwestern. She is tied with Sarah Lynch with 112 points.
? currently ranks second all-time at Iowa in goals scored with 43. Sarah Lynch is the record holder with 46 goals.
? has 26 career assists, one shy of tying Morgan Showalter for the most in program history. Lacasse also has the most shots in Iowa history with 305.
? has 12 goals and six assists for 30 points in 2014. The 12 goals and 30 points are tied for the third most in a single season in program history. The forward holds three of the top-five single season goal totals in school history. Lacasse’s 81 shots are tied for the most all-time.

Hannah Clark…
? broke the school record for career shutouts in Iowa’s 1-0 victory at Michigan State on Oct. 2. Clark currently has 19 career shutouts.
? is 10-5-1 with nine shutouts and a 0.84 goals against average in 2014. The nine shutouts are the second most in a single season, while the 10 wins are the sixth-most in program history. Clark also holds the school record in both categories, posting 10 shutouts and 15 wins in 2013.
? has a 4-1 record with a 0.33 goals against average in six career Big Ten Tournament games. She has 29 saves and four shutouts in six contests.
? had four consecutive shutouts from Sept. 7-20, where she had sevens saves over 379:26 scoreless minutes. It was the second-straight season she had a four-game shutout streak.
? Clark has 29 career victories, the second-most in Iowa history, and her 210 career saves rank third in the UI record books.

HAWKEYES DISTRIBUTING
Iowa has tallied 26 assists through 21 games this year. Eight different Hawkeyes have recorded an assist this season. Sophomore Corey Burns leads the team with seven, which are tied for the fifth-most in a single season in Iowa history.

IOWA IN NCAA STATS
As of Nov. 6, Iowa ranks in the top-55 in two categories through 21 games. The Hawkeyes are tied for 31st in shutout percentage (0.550) and 46th in goals against average (0.785). Iowa’s semifinal round game against Northwestern on Nov. 7 has not been accounted for.

BROWN: A CONSTANT
Senior Caitlin Brown is the only Iowa player to log every minute of game action this season. The defender has played every minute for the past 55 games dating back to the 2012 season — a streak of 5,179 minutes.

SENIOR EXPERIENCE
Prior to suffering a season-edning injury in the quarterfinals of the 2014 Big Ten Tournament, senior Melanie Pickert had started every game of her Iowa career, a streak of 84 games. Fellow seniors Caitlin Brown and Cloe Lacasse have started 84-of-85 games as Hawkeyes.