Turning an Ebb into a Flow 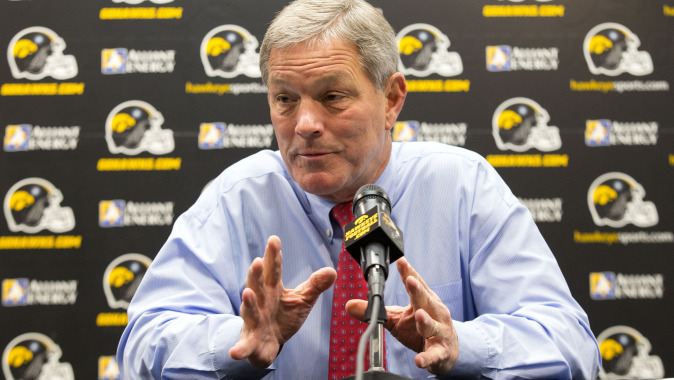 IOWA CITY, Iowa — For every Iowa State, there is Pittsburgh; for every Maryland, there is Northwestern.

How the University of Iowa football team bounces back from last Saturday’s loss at Minnesota will be known Nov. 15 when the Hawkeyes play at Illinois with an 11 a.m. (CT) kick.

UI head coach Kirk Ferentz said at his weekly news conference Tuesday in the Hayden Fry Football Complex that every season has its ebb and flow. For every 24-yard pass completion, there is bound to be an occasional sack. For every 48-7 victory, a 51-14 loss might be sprinkled in there some place.

It is the nature of sports.

The veterans of the UI football program met with media on Veteran’s Day and their message was consistent.

“Stay together and move on. There is nothing you can do about it once it’s over,” said senior running back Mark Weisman, who has scored 13 touchdowns in the last seven games. “We only care about what we control, and what we control is getting better as a football team this week, having a good week of preparation and seeing where that takes us.”

Senior offensive tackle Andrew Donnal knows the Hawkeyes remain confident heading into their final road trip of the regular season. As hard as it is to observe the “24 Hour Rule” after a big win, he said, it can be tempting to glance in the rearview mirror after a tough loss.

“We know we can perform better than we did Saturday,” Donnal said. “You have to put last week behind us and come out with a positive attitude with a good work ethic. We can’t let last week’s game beat us twice. You have to put it behind us and look forward and lead the team through action on the practice field and in the complex — doing everything right, the best we can as hard as we can.”

Iowa hasn’t seen its next opponent — the Illini — since a 27-24 setback in 2008. What happened after that ebb in Champaign, Illinois, eight years ago? The Hawkeyes won their next 13 games that included a victory against No. 3 Penn State, a 55-point shutout win at Minnesota, and a three-touchdown margin of victory over South Carolina in the Outback Bowl.

“You have to bring high energy and effort and bring the juice and get the team going,” said senior defensive tackle Louis Trinca-Pasat. “We have been through this situation where we lost and came back and responded well. We have guys that respond well, and we have to do the same thing this week.”

Senior strong safety Johnny Lowdermilk registered a game-high 13 tackles (with eight solos) at Minnesota. He leads the Hawkeyes with 71 stops this season.

“The sooner you can get back out there on the field, the better,” he said.

Weisman added that the team’s veterans have to show the way, if that means staying grounded after a win or getting up after a loss.

“It’s on the leaders of this team to make sure everyone is even-keeled getting ready to play a football game,” Weisman said.

Competitive sports can be a head-scratcher at times.

What you have control over is the path you take after an ebb or after a flow.

“We’re done looking backward,” Ferentz said. “We’re looking forward and we’ll see what we can do about it this week.”