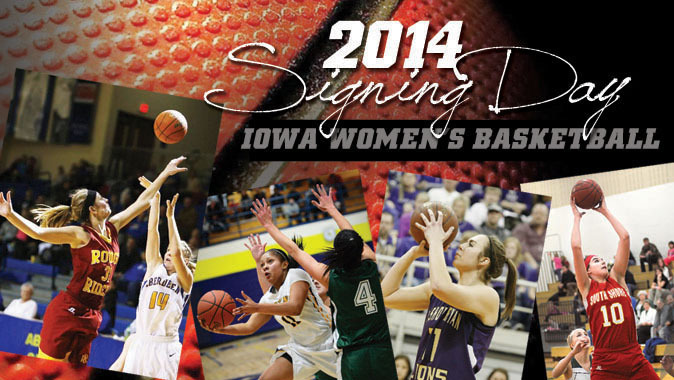 “We are enthusiastic about our 2015 recruiting class that features four outstanding women and covers all of our positional needs,” said Bluder.

Davis, a 5-foot-4 guard from Goodrich High School in Grand Blanc, Michigan, is an ESPN HoopGurlz Top 100 recruit, ranking as the 37th-best prospect nationally and the 12th-best point guard. She is ranked as the top prospect in the 2015 class in the state of Michigan by Lady Baller Insider.

Last year as a junior, Davis led Goodrich to a district title and a 22-3 record, averaging 19.1 points, 3.0 rebounds, 4.1 assists, and 3.2 steals, while starting all 25 games. She earned MLive (Flint) Player of the Year, Associated Press Class B Player of the Year, Basketball Coaches Association Best of the Best (top 11 players in state), Detroit Free Press First Team All-State Class B, Detroit News First Team All-State, and first team all-conference honors. Davis notched five 25-point games, including a 41-point performance. A National Honor Society member, she has been a member of the honor roll every semester since her freshman year.

Bluder on Davis:
“Tania Davis is an explosive guard that can lock anyone up on defense. She is a strong playmaker that is quick and not afraid to be physical. She is one of the top guards coming out of the state of Michigan.”

Davis: Why Iowa?
“I’ve always wanted to play in the Big Ten. The Iowa women’s basketball program offers everything that I’d hoped to belong to… the coaching staff, players, and fan base.”

Gustafson, a 6-foot-3 forward from South Shore High School in Port Wing, Wisconsin, is an ESPN HoopGurlz Top 100 recruit (No. 92). The two-time team captain is a three-time first team all-conference honoree and a two-time first team all-state selection. As a freshman, she averaged 19.9 points, 13.7 rebounds, and 5.3 blocks. Gustafson led South Shore to a conference, regional, and sectional championship as a sophomore, averaging 30.9 points, 12.6 rebounds, and 5.6 blocks in 28 starts as team finished 27-1. Last year as a junior, she started all 27 games, leading team to a 26-1 record and conference and regional titles. Gustafson averaged 29.8 points, 18.9 rebounds, and 5.9 blocks.

Gustafson is also a four-time all-conference selection in volleyball, and competes in the shot put, discus, triple jump, 300-meter hurdles, and 100-meter hurdles in track. She finished seventh in the shot put and 11th in the discus in last year’s state track meet. Gustafson, a National Honor Society member, has been an honor roll student throughout high school. She has served as class president all four years of high school, and served as a student council member as a junior.

Bluder on Gustafson:
“Megan Gustafson is a left-handed post that is a work horse. She is a post that plays well with her back to the basket and doesn’t shy away from anyone or any contact.”

Gustafson: Why Iowa?
“Iowa is an excellent school with a great program, led by fantastic coaches. Once I met the coaches and team, I knew that I wanted to become a part of that program.”

Larson, a 6-foot-2 forward from Roosevelt High School in Sioux Falls, South Dakota, is a three-time all-state and all-city honoree. She is a two-time all-tournament and all-conference selection, and has been named to the Argus Leader First Five. Larson averaged 12 points and eight rebounds and registered 90 blocks as a sophomore, leading Roosevelt to a conference title. As a junior she averaged 16 points and eight rebounds, tallying 69 blocks. She shot 51 percent from the field and 80 percent from the foul line. Larson holds the school record for career blocks and blocks in a game, and needs 71 rebounds to become the school’s career leader.

Larson is a standout outside hitter for the Roosevelt volleyball team, earning all-state, all-conference, and all-city honors. Named a Hometown Hero for her high school, she is also involved in Spanish Club, Cancer Awareness Club, and Fellowship of Christian Athletes.

Bluder on Larson:
“Tagyn Larson is a tall wing player that can shoot 3’s or beat you off the bounce. Her length will be an asset to us in our defense.”

Larson: Why Iowa?
“I chose to be a Hawkeye because of the amazing coaching staff and players, and the family-oriented atmosphere. I knew right away that the University of Iowa was where I wanted to be.”

Stewart, a 6-foot-2 forward from Bishop Ryan High School in Minot, North Dakota, is an ESPN HoopGurlz Top 100 recruit (No. 95). She has played varsity basketball since she was in eighth grade, when she averaged 7.8 points, 6.4 rebounds, 1.7 assists, 1.9 steals, and 1.7 blocks, as team finished third in Region 6. As a freshman, Stewart averaged 18.7 points, 10.2 rebounds, 1.8 assists, 3.6 steals, and 2.2 blocks, leading team to a 26-2 record, a conference title, and a fifth-place finish at the state tournament. She was named all-state, all-region, all-district, and to the state all-tournament team.

Stewart is also a standout volleyball player, earning all-district and all-region honors. She plays pitcher and shortstop in softball, and owns the school records for home runs, career hits, and pitching wins. Stewart tossed a no-hitter in the 2013 state tournament. She has guided Bishop Ryan to three-straight conference titles and three-consecutive state runner-up finishes, while being named all-state and state all-tournament four times and a nominee for the Gatorade Player of the Year twice.

A 4.0 student, Stewart serves as National Honor Society president, and is a member of the speech team, Rotary Club, and S.A.D.D. She is also a Special Olympics volunteer and plays violin in the orchestra.

Bluder on Stewart:
“Hannah Stewart is a strong power forward that can stretch defenses or post up. She can rebound with the best of them and still runs the floor hard. She is a superb athlete that will fit well into our system.”

Stewart: Why Iowa?
“I chose the University of Iowa because right away it felt like a home away from home. I’m a people person, and the people who I would be around every day were awesome. The girls who would be my basketball teammates immediately felt like friends. I have also been coached by my mom all my life, and coach Bluder and staff showed me the same great qualities. I’m very excited to play for them. The Tippie College of Business was also very appealing to me. I’m thankful to start my academic business career as a Hawkeye.”