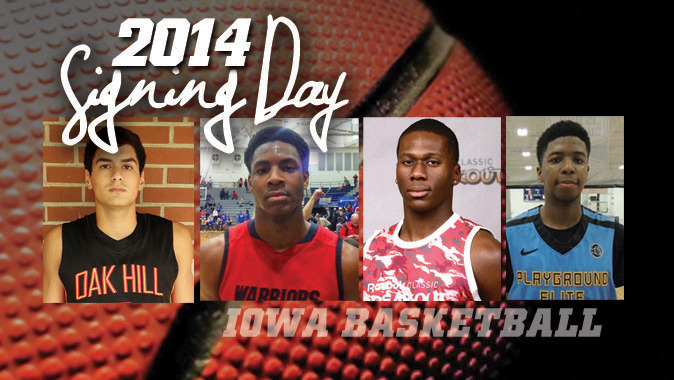 Hutton is a 6-foot-6, 210-pound forward from De La Salle High School in Chicago. He averaged 12 points, eight rebounds, four assists and two blocks while earning Chicago Catholic League All-Conference accolades last season. Hutton was also recognized on the 2014 Illinois Basketball Coaches Association third team all-state squad. He will be a two-time team captain and three-year varsity player once he begins his senior season. Hutton, a 2015 McDonald’s All-American nominee, is also a leader off the court, being recognized on the honor roll and participating in a number of student groups. Hutton also competed on the Illinois Stars AAU squad.

“Every time I step on the court representing the Hawkeyes I leave the court knowing that I left my blood, sweat, and tears out there representing Hawkeye nation,” said Hutton.

“We are thrilled that Brandon is going to be a Hawkeye,” said McCaffery. “He’s a tremendous athlete, a fierce competitor and is extremely versatile. As good as he is now, I believe with his work ethic and determination, he’s going to continue to improve. He’ll become someone who can be a lock-down defender, a great transition player, as well as a quality scorer.”

Fleming helped lead Ensworth High School in Nashville, Tennessee, to three-straight state titles, earning all-tournament laurels on each championship team. He is a two-time All-State honoree, earning first team recognition as a junior and third team distinction his sophomore campaign. As a junior, Fleming was named Tennessee’s Division II-AA Mr. Basketball and was tabbed the state championship Most Valuable Player. Fleming led the Region in scoring his sophomore (20.5 ppg) and junior (19.3 ppg) seasons. He scored 1,117 points in three seasons at Ensworth before playing his senior year of prep basketball at Oak Hill Academy (Virginia) for coach Steve Smith. Fleming is the Ensworth record holder for points (49) and 3-pointers (9) in a single-game.

Fleming played AAU basketball for M33M Let it Fly and Team Thad in 2013-14. He made the All-Star Game festivities at the Pangos All-American Camp in 2014, which invites the top 100 preps in the country. Fleming was also invited to represent Latin America at the Adidas Nations Global Experience, also held in Long Beach in 2014. His sophomore year, he was honored on MaxPreps Sophomore All-American Team and was invited to the Nike Elite 100 Camp.

“I am very excited to play college basketball at the University of Iowa,” said Fleming. “It’s a blessing to have this opportunity to play for such a great coaching staff and to play at such a great school with the most passionate fans. I am excited to do huge things in a Hawkeye uniform and I’m ready to help bring wins to this program so we can be one of the dominant teams in the Big Ten. I’m excited to play basketball for Coach McCaffery; he’s a great coach and an even better person, and that’s the type of coach I was looking for when I was looking for a school. Iowa is the place to be for me and I couldn’t be happier.”

“Andrew has the ability to play a number of different positions. He can play the point, he can score at the two-spot, and is athletic enough to play the three,” said McCaffery. “He’s smart and has tremendous savvy. With the departure of the guys we are losing the last couple years, we need someone to come in that is ready to go, score, and make the plays — Andrew is capable of doing that. We’re thrilled that he’s a Hawkeye.”

Wagner, a native of Yellow Springs, Ohio, accumulated 686 points (shooting 61 percent from the field), 526 rebounds and 138 blocks his first three seasons at Wayne High School. As a junior, he averaged 15 points, 11 rebounds and four blocks, earning conference Player of the Year and honorable mention all-state laurels, as well as being recognized on the first team all-conference and all-division teams. The 6-foot-7, 215-pound forward was also his team’s co-Most Valuable Player in 2014. A three-time team captain, he has also excelled in the classroom by maintaining a GPA above 3.5. Wagner also played on the All-Ohio Red AAU squad, who finished first in the division in the EYBL. He also enjoyed playing overseas in Italy his sophomore year.

“I am very excited about officially becoming a Hawkeye, and playing for coach McCaffery and the rest of the staff,” said Wagner. “I am looking forward to my coaches, future teammates, the wonderful fans, and officially being a part of the Hawkeye family.”

“Ahmad has incredible speed and quickness,” McCaffery said. “He has a high-motor, is smart, skilled and tough. He provides a definite need for us in the front court with the departure of Aaron White and Gabriel Olaseni (next year), and Zach McCabe and Melsahn Basabe (this year). He has the athletic power to play the four, and the quickness, speed and versatility to play the three. We are excited about his future.”

“I chose Iowa because I am extremely comfortable with the coaches and the environment,” said Moss. “I’m really looking forward to playing for coach McCaffery because I know he’s going to pull the best out of me every day.”

“Isaiah is an athletic wing who can dribble, pass, and shoot,” said McCaffery. “He’s big enough to guard guys in the post and quick enough to guard guys on the perimeter. Isaiah is a big-time play maker, who can create his own shot and score at a high-rate. He’s also going to make an immediate impact on this team.”