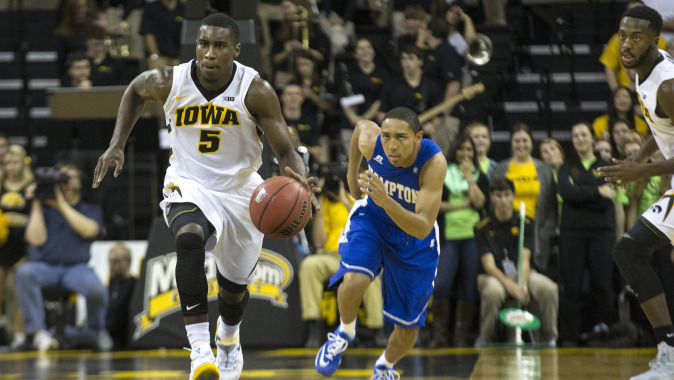 Q. Can you talk about Aaron White’s performance tonight?
COACH MCCAFFERY: I thought his energy level set the tone for a lot of what happened in the first half. I think Clemmons in particular, you look at a lot of different things, 14 assists, 18 field goals in the first half was impressive sharing the ball. You’re playing against a very physical team. That’s how they play. That is their mindset coming into the game. You just have to be ready to play that way without turning it over. You have got to get to the free throw line. So we try to be strong with the ball and move the ball side to side and get a good shot opportunity.

Q. Uthoff seemed to be pretty aggressive from the get go, couple of early 3 pointers kind of got you guys going?
COACH MCCAFFERY: He’s been playing great. I have supreme confidence in him. He’s got confidence in himself. I thought he played sort of a mistake free game; shot it when he was open, moved it on when he was covered and really impressive, I thought.

Q. You look at the second unit early midway through the first half, didn’t get much offensive production out of them?
COACH MCCAFFERY: Shot it quick four times in a row. And what I told the guys was each shot that those individuals took, Josh took two, Pete took one, Trey took one. They’re all good shots for them but not when they’re in a bunch and not when they all miss. So we get up 10, we jack four straight possessions. Don’t score. Long rebound. Running team. All of a sudden you look up, you’re only up 4. So we learned something there.

Q. Were you pleased with how they performed when you got them in later on in the game?
COACH MCCAFFERY: Yeah, but I really had confidence that they would do that. Especially Pete in the second half. I knew he would come back. He ends up with 11 points. And he’s not happy with himself right now, which is a good sign. You get 11 and 8 and you feel like you should play better. That’s a good thing. And that’s why he’s going to be terrific for us this year.

Q. Did you have the kind of performance you need from White going forward?
COACH MCCAFFERY: Yeah, I mean, he’s got unbelievable ability to impact a game in so many different ways. I mean even just the loose ball recovery and the timeout when we needed it. The crowd really responded to him. A couple times when we didn’t shoot the ball in the hole, he dips it in, offensive rebound, transition opportunities, finishing on the break. I mean, normally he’s going to go 9 for 10 from the free throw line and not 10 for 10, which is still pretty good.

Q. Are you happy with your defense tonight?
COACH MCCAFFERY: I was. It’s a driving team. I think we played the scouting report pretty well. Couple of times we went for shot fakes when we shouldn’t have. We gave up 11 offensive rebounds, a couple more than you would have liked. But again, once you get up 30, the game becomes a little more sort of haphazard.

Q. Fairly quick turnaround, what’s the key in making sure you’re prepared for Monday?
COACH MCCAFFERY: We’ll enjoy this one tonight and let the guys enjoy. We’ll go to work tomorrow. We got a lot of two day preps coming up, two day prep, game.

Q. I know you expect great defense and everything out of Clemmons, but do you expect to get this kind of offense out of him night in and night out?
COACH MCCAFFERY: He’s certainly capable. He took shots that he typically makes. I think that’s the beauty of his game. He doesn’t drive into packs of people and take crazy threes. He shoots open threes. He shoots a little floater. And he scores in transition. Other than that, he guards his man and moves it on and gives you a level of toughness that I think every team needs and certainly our team needs him to be that way.

Q. What was your read on Dom and Trey getting their first session?
COACH MCCAFFERY: I thought they both did some really good things. Trey got a little wild there, but it was a little bit of a wild game when he was there at the end. He has to take advantage of his speed and create more turnovers and just get us into our stuff. I think he feels like he’s got to hit the home run every time. You’ll have plenty of opportunities to score, to drive. I thought Dom was great. I was really happy for him.

Q. It was kind of quietly announced today that you got a contract extension. Is that something that’s been in the works for a while?
COACH MCCAFFERY: Yeah, those things take a while. There was no great urgency on my part or the administration, but I’m just so incredibly thankful to Gary Barta and President Mason for showing the confidence in me to extend my contract. It certainly helps in recruiting to be able to tell recruits, hey, I am going to be the coach. It’s an affirmation on what’s going on. I think we have a good team, and we have great kids. We’ll keep working at it.