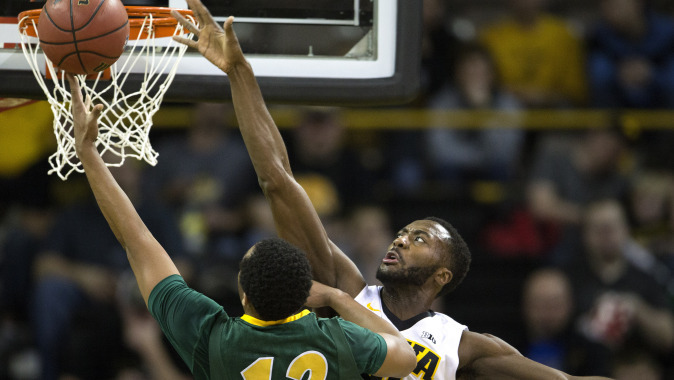 Q. Your posts were really active tonight. Was that a conscious effort to get them the ball or just the way the offense worked?
FRAN McCAFFERY: Well, you know, we had a size advantage, and we wanted to get the ball inside. I think it’s something that we thought would be good for this game, but I think moving forward, I think we’ve got to establish that we can run our offense through the post, whether we score or whether we go in and out and to the weak side. Both of those guys are willing passers, and to see them both get double doubles is a great feeling.

Q. We all knew that Anthony Clemmons came here because he could play defense, but he’s shooting the ball pretty well. Is that scoring element something you would like to see?
FRAN McCAFFERY: Well, it’s there, because you know what he does, he takes good shots, and he drives and gets to the free throw line. Typically he doesn’t force much. He had that one turnover on the break, wasn’t really anything there, but other than that, he played defense, got three steals. He’s physical, and he’s playing like an experienced player. There’s no panic in his game at all.

Q. You mentioned three steals. One of them was an inbounds pass at half court, maybe a play that this team didn’t make very many of last year?
FRAN McCAFFERY: That’s quite frankly why he’s in the starting lineup. He’s going to make those kinds of plays, and it’s infectious to the rest of the team.

Q. Early on Gabe got his points basically off of offensive boards. Tonight he was posting up, he’s hitting turnaround jumpers, he’s getting to the free throw line. Has he become a more complete offensive player?
FRAN McCAFFERY: Well, there’s no question about it. He’s got a great face up game. He can shoot the baseline jumper, the foul line jumper. He’s quick with his spin moves off either shoulder. He can finish with his right or his left, and then if you foul him, he’s simply going to make his foul shots. So as long as he keeps posting up hard or ball screen and running right to the rim, we’re going to find him.

Q. Could you assess the team through two games? I know it’s only two games, but how happy are you through two games?
FRAN McCAFFERY: Well, I think we’ve done a pretty good job these two games of locking into the game plan. These two teams that we beat by substantial numbers I think are good teams, and I think teams that ultimately in their conference are going to be very successful. We put a game plan out there, if they do this this is a pack line defense. With a few exceptions, when we drove and put our head down, we moved the ball. We moved the ball. We really wanted to run. We ran. I think our transition game was the best it’s been in a while. We’re rebounding, outletting. So as long as you do that and share the ball like we do, we had 12 assists on 17 field goals in the first half, and in the second half we still had 20 on 30 field goals. I mean, obviously the only thing that would be disappointing is 18 turnovers. That was a little sloppy.

Q. How rewarding is it for you to see a guy like Clemmons who obviously had a tough year but he says he’s recommitted and he comes back and plays as good as ever. That says a lot about him, doesn’t it?
FRAN McCAFFERY: Yeah, it’s a rare thing these days. It just is. He didn’t blame anybody, I when you look at how I used him down the stretch last year, I mean, it’s hard to play five guards. Everybody knows that. Typically you have a four guard rotation, sometimes three, and the fourth doesn’t play much. We were trying to play five for a stretch there, and Pete was the odd man out, and then Pete became the fourth and Clemmons was the fifth. It’s real easy there to walk away, say, look, I’m the fifth guard, and we’ve got people back, when am I going to play. He never lost confidence in himself. I think the first thing was to say, all right, I didn’t have the kind of year I could have had. What do I have to do? I have to admit that, recommit myself physically, and then get after it in the summer, and the Primetime League helped. I think his scoring will be there, there’s not a lot of defense in that league anyway, but he went and got buckets, he was the MVP again, his team won the thing, and then he came back and just kind of went after that starting position. I don’t think anybody thought he was going to be a starter. I didn’t. Not really in my thought process. I thought it was going to be Pete or Josh in that position. And both of those guys were playing well, too, by the way. It’s not like they rolled over. He just went and got it, and happy with how those other guys are playing.

Q. You look like you’re really running good offense. You have guys that like to share the ball anyway, but they’re also shooting it when the shot is there. How do you feel about the way they’re playing?
FRAN McCAFFERY: I feel good about it. I feel comfortable. You never want to feel I’ve got a lineup out there that can’t score. I’ve got to start making subs. When you go to your bench, you want to get fresh bodies, but do you have a mixture? Do you have enough rebounding? Do you have enough defense? Do you have enough offense? Do you have three point shooting? You know, so I feel like we have all of that no matter what lineup I put out there. That’s a good feeling because you don’t have to yank somebody when a guy makes a mistake or a guy misses a shot because you feel like, okay, this train is going the wrong way.

Q. The competition gets a lot tougher in the next two games. Did you see enough in these first two games to feel good about who’s coming this week?
FRAN McCAFFERY: I feel good about where we are; no question. I watched the Texas game against North Dakota State, incredibly talented team. You see why they’re ranked in the top 10. We’ll have to play better than we’ve played so far, but we’ve got a couple days to get ready.

Q. Defense was a big emphasis for you guys in the off season. What have you seen through two games in that regard?
FRAN McCAFFERY: Pretty good. I mean, I feel like we paid attention to the game plan defensively. Alexander got away from us late, but we did a pretty good job on him for most of the game when the game was still in the balance. He didn’t hurt us too bad. We didn’t really want him to hurt us. You’re look at last game, we worried about the 1 and the 2. Pretty good job on those two guys. Once you start to play some other teams like Texas, they’re going to have like I said, they’ve got Miles Turner coming off the bench so they’ve got a lot more weapons, so you’ve got to really be pay attention to detail I think in that game, and you can’t give them second and third shots, which is what they’re really good at. I think the glass will be key, taking care of the basketball, can’t turn it over or anything like that.

Q. We’ve heard a lot about how Woody has improved offensively. Is tonight an example of pretty much how comfortable he is?
FRAN McCAFFERY: What I think you see with him is the confidence with which he played offense. Even when he missed shots, he would turn and face, and if you backed off he’d just shoot it. He’s making that shot. Even if he misses it, he’d feel a little bit of pressure that was unnecessary because we’re going to let him play through it. We’re really happy with where his game is right now. I think he is, too.

Q. You guys went on that run at the end of the first half and then you scored the first 15 points of the second half. How important was that to get that going?
FRAN McCAFFERY: I think it was great. That way I could start resting guys. It was a real struggle there to put White back in. He wanted to go back in. He didn’t feel like he got enough of a run. My plan was just to kind of keep him on the bench. They wanted to go back in, so I let them each go back in. Obviously disappointed at the sloppy ending, but when you take care of business and you’re up by that many, I guess I shouldn’t worry about it too much.