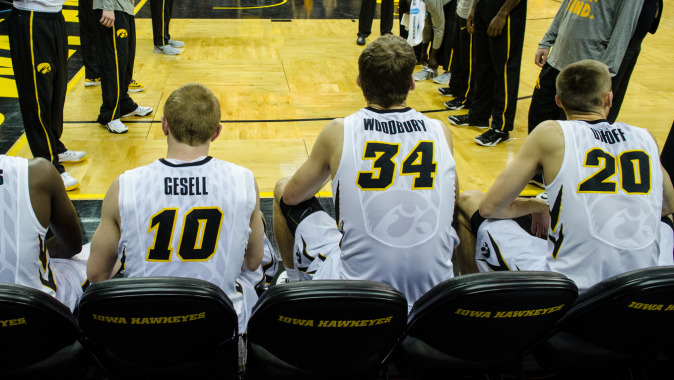 Q. What disappointed you the most about the game tonight?
COACH MCCAFFERY: Well, I thought there were a lot of great things about this game. And so I’m not, I didn’t go in there with any negativity whatsoever. We just beat a team that’s going to win 20 games. That’s a terrific basketball team we just beat. Forced them to 19 turnovers, defended them. Our execution wasn’t as sharp as it needs to be. It’s got to get better. It’s early. But we executed when we had to.

Q. I just ask that because you seemed kind of perplexed, you seemed very upset with things that went on.
COACH MCCAFFERY: I was upset with like four or five different things that happened that shouldn’t have happened. We lineup wrong in a press attack, when I just diagramed it. You know. Jarrod says “Coach, I got confused. You wrote JU, I thought you wrote JO.” Okay. All right. That’s Jarrod for you right there. (Laughter.).

Q. Are you shortening down the bench a little bit? Dominic didn’t play.
COACH MCCAFFERY: Yeah, I feel terrible about that. Trey played well when I put him in. Dom, I should have got him in there. It was one of those games, it was a struggle offensively, and it was a lot, it was one of those games. We’re playing an experienced, physical, very strong athletic team. And I thought it was a tough situation for Dom right now, to put him where every possession is magnified, because of the quality of our opponent. So I feel terrible, he deserves to play, I got to get him in and I will.

Q. Can you talk about Mike’s play tonight?
COACH MCCAFFERY: Mike was great. It was interesting, because, the first possession of the second half, he makes an unable steal in the first possession for them. Comes down the floor and throws the ball away. And I said to him, I said, “Mike, I said, who stopped you?” I said, “Nobody. You just, you were coming down and you were going to make a pass to somebody.” I said, “You keep going. Until somebody stops you. Every time you come down, until somebody stops you, you keep going.” And I thought he had a very aggressive mindset. I thought that the threes that he took were threes that he’s going to make. Post feed kickout, opposite rebound kickout. I mean, he shot it well, he had his pull up jumper going, he was aggressive to the rim. He did a great job against the press. They were pressing us, we had a couple turnovers early, we got a little sideways with the ball. But in the second half he was really good.

Q. Talked about the guard play shooting wise in New York. It seemed like it was hit or miss a little bit today.
COACH MCCAFFERY: Well, it was better. It was better. We still got to get Josh and Pete going. They’re our two best shooters and they aren’t making shots. I thought Pete’s last two were down. I mean, they were halfway down. I thought Josh had a couple really good looks at it. We’ll get them going.

Q. You experienced this before where your team has played two games on a pretty big stage, didn’t have the results you wanted, and then they come back and play and maybe, I don’t want to say go through the motions, but it’s, they’re kind of searching for their identity again. Licking their wounds, so to speak.
COACH MCCAFFERY: I don’t think so. No, I don’t think that’s what happened tonight. I thought that we got a lead. They’re a good team. They changed defenses, they bang you. They’re physical. And we were able to hold them at bay. Every run they made, we answered it.

Q. They got it down to three and then you ratcheted up your defense, you played four or five possessions of your best defense of the night that got the game turned around.
COACH MCCAFFERY: We did. And that’s, I think, a critical thing, if you look at it. Because if our offense is sputtering, which it was at times, then our defense has to be really good. And that wasn’t the case in New York. When our offense went south, our defense went south. And you’re not going to win then. Luckily, against Syracuse we made the run, 21 6 run and cut it to one possession, but when you’re like we had nine straight possessions against Texas where we didn’t score. You have to come down and get eight or nine stops, or at least seven stops, and we weren’t doing that.

Q. White’s one of the best, if not the best big men, maybe in the country, as far as turning defense into offense and he seemed to really do that a few times tonight.
COACH MCCAFFERY: Yeah, he was great. Four steals, he was a, he was really active at the point of the press. Deflections and had them playing a little bit side to side. This is a real north south team. We got them playing a little side to side because of him. I thought he played with great energy. I felt bad he got that second foul. I sat him for awhile. I don’t like to sit him for that long, but it made him fresh for the second half.

Q. Can you identify anything with Peter and Josh shooting wise? Is it mechanical, just a slump?
COACH MCCAFFERY: They’re both killing it in practice. It’s one of those things I think where they’re pressing a little bit. They know they’re having good looks. The only time I’m going to get upset with either of them is if they’re taking contested or bad shots, ill advised, wrong time on the shot or game clock. But I run stuff for them, they run out on the break, we throw it to them, they got the green light to shoot the ball. I thought they took good shots.

Q. Josh did have one of the better assists of the night, that one handed dunk by Uthoff?
COACH MCCAFFERY: Look at Josh’s assist to turnovers numbers. They’re terrific. They always are. He’s usually a really good defender and he sticks his nose on the glass. So he’s a very effective player, even if his shot’s not going in. And he was tonight.