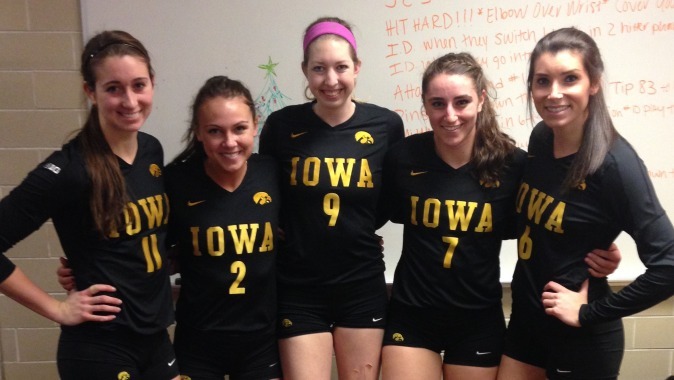 COMPETITION SUMMARY
The University of Iowa volleyball team plays its final home stand on Mediacom Court in Carver-Hawkeye Arena this week. The Hawkeyes face Maryland (9-20, 2-16) on Wednesday at 4 p.m. (CT) and Michigan State (16-13, 9-9) on Friday at 7:30 p.m. Friday’s match is Senior Night for five Hawkeyes — Alessandra Dietz, Erin Leppek, Alex Lovell, Kari Mueller and Emily Yanny. They will be recognized in a pregame ceremony.

PROMOTIONS
Wednesday is Night of Giving and fans will have the chance to win a $50 gift card to Hy-Vee. Two gift cards will be given away. Fans with ticket stubs from the Iowa vs. Nebraska football game can attend Friday’s match for free. It is Fan Appreciation Night and Senior Night. Hawkeye prize packs will be given away during the match, and the senior class will be honored prior to the contest.

FOLLOW ALONG
Fans can watch both matches live online through BTN Plus on btn2go.com. Play-by-play announcer Tim Keating will call the action. Gametracker (live stats) are available for each contest at hawkeyesports.com.

CAREER CLIMB
Senior Alessandra Dietz is tied for first all-time at Iowa with a .276 career attack percentage. She is even with Jen Barcus (2006) who recorded 304 kills, 82 errors and 804 total attacks in her career. Dietz enters the final week of her career with 610 kills, 189 errors and 1524 total attacks in three seasons. She is also 13th all-time with 269 career blocks, and two service aces (78) from entering Iowa’s top 20 career list (80).

HOME COURT ADVANTAGE
There has been a significant increase in volleyball attendance in Carver-Hawkeye Arena from 2013 to 2014 and the Hawkeyes are fueled by the crowd’s support. Iowa has welcomed a crowd of more than 1,000 in seven of its eight home matches this season for an average of 1,442. In 2013, the Hawkeyes averaged 1,109 fans at home.

The Hawkeyes were led by Lauren Brobst offensively, who posted 13 kills, hit .444, and recorded three blocks in the match.

THE START OF A STREAK
The Hawkeyes swept Maryland (25-21, 25-17, 25-20) on the road in their first-ever meeting with the Terrapins on Oct. 31. A balanced offensive attack keyed the victory for Iowa. Taylin Alm led the way with nine kills, while Jess Janota and Julianne Blomberg each contributed seven kills. Blomberg (12), Kari Mueller (10) and Michelle Fugarino (10) all reached double digits in digs, while Mikaela Gunderson led the blocking front with five total in the match.

The victory was the first of Iowa’s four-match Big Ten win streak — the longest since the team recorded eight in a row and clinched a berth to the NCAA Tournament in 1994. The win also marked first-year head coach Bond Shymansky‘s 300th career victory.

B1G WINS
The Hawkeyes have five victories in Big Ten action with two conference matches remaining in the regular season. That is the most for the program since 2009, when Iowa posted a 5-15 record. Iowa recorded its first win at home against Northwestern on Oct. 18, outlasting the Wildcats in five sets. It was the first win for the program over Northwestern since Oct. 23, 2009, when Iowa swept the Wildcats in Carver-Hawkeye Arena.

The Hawkeyes collected four Big Ten wins in a row — the longest conference win streak since 1994 when the team recorded eight consecutive victories and went on to clinch a berth to the NCAA Tournament – with a sweep of Maryland, a four set win over Rutgers, a five set victory against Indiana and a four set win over No. 12 Purdue. The victory against Purdue was the first ranked win for the program since 2012.

With a win over Maryland on Wednesday, Iowa will reach the six-win mark which has not happened since 2008 — Sharon Dingman’s first year as head coach. A win over Michigan State on Saturday would bring the team’s conference win total to seven, which would be the most for the program since 2000 when the Hawkeyes went 11-9 under head coach Rita Buck-Crockett.

The squad is undefeated in four-set contests (5-0) this season, with victories over UT-San Antonio, Idaho State, Florida International, Rutgers and Purdue. Iowa is 2-1 in five-set competitions, with wins over Northwestern and Indiana. The lone loss in four or more sets came against Illinois (3-2).